Pollen weathers the storm, adds another $150 million to the go bag

For London-based travel and music experiences provider Pollen, the past few years haven't exactly been the easiest. And yet, the company is still standing and has raised $150 million in a Series C round.
Dan Taylor 22 April 2022
Share
Facebook Twitter Linkedin

London-based Pollen, which bills itself as a travel and entertainment technology company, has raised $150 million in a Series C funding round. The round was led by existing investor Kindred Capital, with Lansdowne Partners, Northzone, Sienna Capital, Backed and Molten Ventures all following on. The capital is expected to help Pollen bolster its market position as it scales the number of curated travel experiences on tap, aiming to meet the growing wanderlust. To date, Pollen has dusted $238.5 million seeds.

When people look back after 10 years, and think about their top five memories, we want them to feel like Pollen was responsible for three of them.” - Callum Negus-Fancey

Pollen offers customers tailored music, sports, and travel experiences — from beach holidays and festivals to a broad range of ski packages. As you might imagine, Pollen’s target market is the 16-28-year-old demographic, who, not only have the hunger for the types of experiences Pollen is creating, but also have a rather large portion of disposable income. “People want personalized travel experiences built around what they are passionate about,” said co-founder and CEO Callum Negus-Fancey, “and Pollen is at the forefront of this demand; we use our proprietary data and customer insights to build one-of-a-kind travel experiences with the world’s biggest talent and brands in the best destinations.”

As of late October of last year, Pollen quoted selling almost 800,000 experiences in total; and cooperations in place with over 500 global brands including Live Nation, MGM Resorts, TAO, Hakkasan, AEG, and C3; and had secured partnerships with Ticketmaster, Eventbrite, Priceline, Stubhub, and SeeTickets.

To continue expanding, the company also acquired North American competitor Lifestylez, the largest college ski and snowboard “experience” provider. Looking long term, as Gen Z consumers have been reported to be vigilantly loyal to a brand once it's gained the consumer's trust, should Pollen be able to iterate these experiences or open new divisions along the way, they might just be on to something truly experiential.

If you're anything like me, the prospect of joining my friends, and making some new ones along with way, whilst packed together in a dark and sweaty nightclub with at times overly loud music sounds nothing short of a dream, we're not alone.

With the reality of a Covid-soaked world putting the breaks on that Saturday night faster than the speed of sound, Pollen has somehow managed to weather the storm and is coming out shiny and bright on the other end.

"When the pandemic hit we knew we had to move quickly," Negus-Fancey told me. "A big one was that we built protections into all of our contracts that ensured that we could do right by our end customers. Sure we had Force Majeure at our disposal, but that doesn't always mean it's going to be reconciled in a timely manner."

With sales figures that have increased more than 300% relative to pre-pandemic levels, according to the company, Polled travelled some 300,000 people last year,  and Pollen was forced to (only) either postpone or cancel events for approximately 100,000 individuals due to the moving target that country by country, venue by venue Covid rules required. 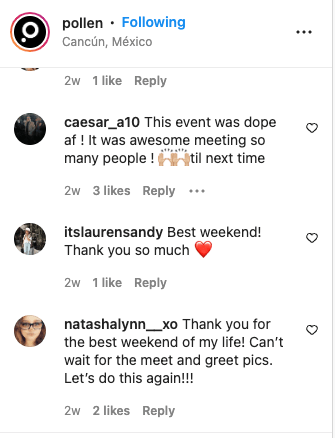 Speaking exclusively to Tech.eu Callum commented, "One of the things we implemented quite quickly was moving from a 14-day to a 90-day money back cancellation policy. No vouchers, no 'come back next year' offers. If the plug was pulled, we did everything within our power to get money back in our customers' hands."

As the devil is always in the details, in the case of Pollen, that devil is the cash flow. "When you're coordinating with thousands of venues, hotels, etc. around the world at any given time, the sheer magnitude of moving capital around can be staggering. I've personally reviewed a number of the complaints we've received, and they really boil down to a customer expecting to be reimbursed for a third-party service they themselves had booked outside of our offer."

Callum went on to further clarify that, "of those 100,000 cancellations, approximately 60 per cent of our customers were fine with sticking to the new dates announced, and only 40 per cent requested for a refund."

So while Pollen's outward appearance on Google reviews might not be the shiniest, what's important to keep in mind is a phrase that serves this author daily, "Haters gonna hate".

But don't simply take my word for it, take a dip through Pollen's insta and peep some comments. Proof. Pudding.

"Pollen has managed to forge a new sector in entertainment: artist-led travel experiences. Scaling a global travel company in the middle of a pandemic is not for the faint hearted, yet Pollen has managed to more than triple its bookings through the Covid period, partnering with many of the largest artists globally like Justin Bieber," commented Backed VC's Andre de Haes. "Pollen has a shot at becoming the dominant player in live music: it's a far richer experience to spend a long weekend with 2000 other true fans in a beautiful destination, than simply to turn up at a stadium for two hours for a gig."

Previous Pollen backers Molten Ventures' Edel Coen and James Clark will be joining us at the Tech.eu Summit in Brussels on the 17th of May.

Pollen weathers the storm, adds another $150 million to the go bag
Comments
Follow the developments in the technology world. What would you like us to deliver to you?
All