There's an amusing parlour game in the European tech scene, and it's called "Why X will be the next Silicon Valley", where "X" can be any European city including Berlin, Stockholm, Estonia, Paris, Helsinki, Moscow, Amsterdam or Barcelona.

Though the game is partially harmless fun, it's also symptomatic of an unproductive way of thinking.

Innovation and entrepreneurship don't have to be zero-sum games

Every hub seems to think that if it wants to succeed in building "The Next Silicon Valley", other wannabe Silicon Valleys have to lose.

So we're jealously checking the number of VC deals and M&A activity in London or Paris, and at the same time worrying that our local hub will never "reach the density" of Silicon Valley. And what about our startup culture? It's not quite there. Oh, and the dreadful funding gap...

European innovation hubs seem to be trapped in this bipolar condition, alternating between hubris and depression.

Which is why we were interested to see the results coming out of the recent “EU Atlas of ICT Hotspots”, commissioned by the European Union, shedding a different light on innovation in Europe.

By simply zooming out, Europe all of a sudden doesn't seem so anemic when it comes to innovation. Here's a look at an illustration from the study: 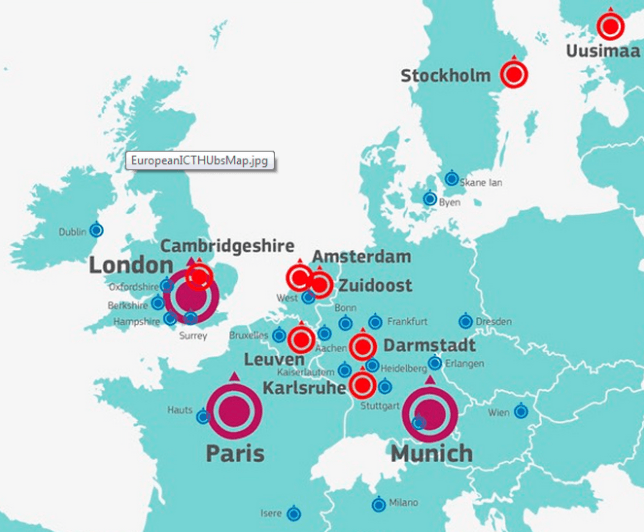 Now the same picture with a circle of about 400 km around Brussels: 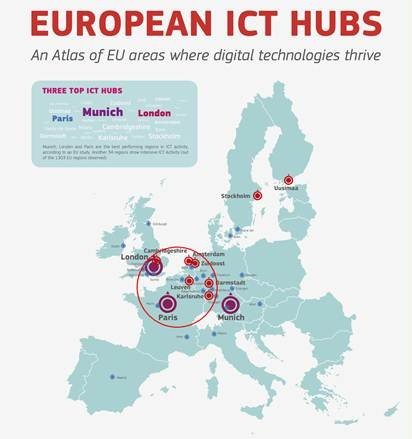 It seems that there is a huge innovation cluster forming in the region circling around London/Cambridge, Paris, Amsterdam and Munich with Brussels, Leuven, Eindhoven, Darmstadt and Luxemburg in its core. What's more, most of these hubs are connected to each other by high speed rail.

While we're aware that tech.eu's editor expressed a sentiment on Twitter that this study is "bullshit" because regions or cities like Berlin, Helsinki, Dublin and Barcelona didn't make it to the top of the list.

@rafweverbergh @omohout if Berlin, Dublin, Helsinki and Barcelona are not in or near the top of that list, something is fishy.— Robin Wauters (@robinwauters) April 17, 2014

The distribution of "ICT excellence" is a typical example of power law – and Berlin as well as Dublin and Helsinki (or to be more precise, Usimaa, the region which not only encompasses Helsinki but also Espoo) are near the top of the list.

They're just not at the very top due to the fact that the authors of the study looked beyond the number of VC deals or the small percentage of "hot" startups.

Even though the study may not support the intuition of startup watchers, for us, that's exactly what made it stick out. Despite the fact that Tier 1 regions in the EU study, such as Leuven, Karlsruhe or Darmstadt, have never made it into the parlour game of "who will be the next hub", there's clearly activity bubbling in these lesser-covered regions.

The study also suggests that if Europeans would just zoom out, they would discover that what may seem like a weakness – the fact that innovation is distributed among different hubs and regions instead of being condensed into a 50 km by 50 km "valley" – could arguably be called a strength.

So while Karlsruhe may not become The Next Silicon Valley all by itself, it will probably thrive as a part of a larger network of innovative regions. It's probably too soon to speak of a "Euro Valley", but looking at the map, it looks like a very interesting innovation cluster is taking shape.

What's the next course of action?

For local authorities I believe the study suggests a useful approach to increasing "ICT excellence" – particularly, stop obsessing only about a self-sufficient hub designed to attract entrepreneurs. Instead, strive to also maximize the flow of people, ideas and money through your local hub. A good way to do this seems to be strengthening ties in surrounding regions.

As for growth companies and entrepreneurs, the study encourages them to start building an international network as soon as possible. So visit as many events as possible with attendees and speakers from surrounding hubs.

If we can increase the density of the European innovation network, good things will happen.

Your local European tech hub probably won't be The Next Silicon Valley – and why that's okay
Comments 2
Follow the developments in the technology world. What would you like us to deliver to you?
All