A close-up of Clue, the startup that aims to help women make sense of their fertility cycle

We had a chat with the founder of Berlin-based Clue, which offers an app that helps women make sense of their menstrual cycles, on the heels of the startup bringing on board more angel investors.
Charmaine Li 05 September 2014
Share
Facebook Twitter Linkedin

In May of this year, a photo of Clue CEO and founder Ida Tin donning an all-black ensemble and a baby bump was shared on the company’s Facebook page.

Alongside the image was a caption that said: “Guess the word is out! Our CEO Ida has a ‘side project’ she's working on. Made possible by using Clue, of course!”.

Clue is a digital fertility tool that lets users (and their partners) track their menstrual cycle by entering data about their period, sex drive, mood, fluid and pain. The more input the app receives, the more accurate Clue becomes in predicting your cycle – which can be useful if you’re trying to get pregnant, trying not to get pregnant or simply trying to make sense of recurring mood swings.

Three months later, Tin is sitting across from me at Clue’s new office in Berlin clad in a black dress and gently rubbing her protruding belly. I’m told she’s expected to have her second baby in a week.

Despite it being her first day of maternity leave, Tin kindly agreed to meet with me to chat about the startup’s latest funding announcement, what it’s like to run Clue with co-founder/life partner Hans Raffauf as well as where the company is headed next.

The need to Clue in on the fertility cycle 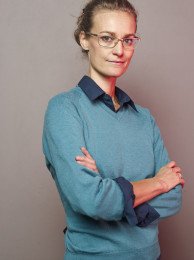 “It started because I was frustrated that we didn’t have a good method for managing this part of life. I had tried to be on the pill and... had too many side effects,” recalled a soft-spoken Tin on where the idea for Clue originated from.

“I started thinking about this just as the iPhone came out and, I thought, if you could use your phone to store this sort of data – it would be a very powerful tool to have,” she added.

After doing some research and brainstorming, Tin – who is originally from Copenhagen and graduated from Danish creative business school KaosPilots – said she was surprised to see little innovation in this realm since the birth control pill came out about 50 years ago.

Tin met Raffauf at a tech conference some years ago and they became a couple soon afterwards. The pair then decided to pursue Clue together and launched the app in July 2013.

Since then, the startup has grown to 12 people and raised a total of 1 million euros from a slew of prominent investors including Christophe Maire, Joanne Wilson, Thomas Madsen-Mygdal, Andreas Ehn and Sriram Krishnan among others.

Clue also announced last month that Heroku co-founder and former CTO Adam Wiggins – who was already advising the company – had joined the company as interim CTO.

Though Tin didn’t disclose any user numbers, according to a statement by startup, the app has been ranked No. 1 in the ‘Health and Fitness’ category in 28 different countries so far this year.

“What we find is that many women feel very empowered by knowing what’s going on. Most women have many questions in this area, like why is my period late? Am I normal? Am I healthy? Have I gotten pregnant?” Tin told me.

“Keeping track of this provides a sense of ‘Okay, now I know.’ You’re kind of in control of that part of your life, and that’s pretty profound.”

Not pink and proud

Even though the period is a natural bodily function and crucial aspect of life for half the world’s population, the topic often breeds a general feeling of awkwardness, shame and embarrassment among both women and men. Hence all the code words, I presume.

Not only that, do a quick search for ‘fertility’ in the App Store and you’ll be met with period-trackers drenched in pink, loaded with swirly fonts and covered in flowers.

Echoing sentiments of a number of recent articles blasting a five percent tax on sanitary products in the UK (which used be as high as 17.5 percent), Tin said women shouldn’t have to pander to gender stereotypes or prevailing attitudes about menstrual cycles. Especially when it comes to choosing a tool to monitor it.

That’s why Clue is adamant on creating a user experience that focuses on confidence, empathy and science, as opposed to "filled with butterflies and euphemisms".

Of course, Clue's not the only one in this space with this in mind.

Other digital fertility tools with a thoughtful (non-pink) design include Glow – which was cofounded by former PayPal CTO Max Levchin and has garnered $6 million in funding – and Ovuline – which is designed by Harvard scientists and has raised about $2.5 million in financing. 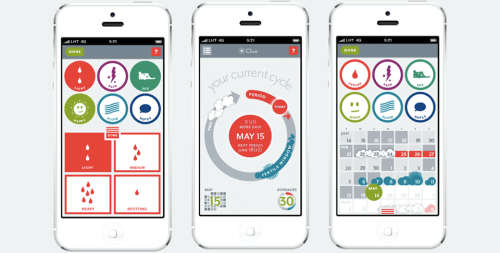 Design plays a huge role in Clue's app and Tin believes it's a key factor – alongside smart algorithms and doctor-reviewed informational content – in differentiating the app from others out there.

In an article written for Fast Company, Mike LaVigne, Clue's Head of Product, provided some insight on the startup's design approach:

Designers and media tend to reinforce an image of femininity that very few women relate to. Do women really need to open an app that’s plastered with teenage projections of femininity: Barbie-doll body shapes and Hello Kitty imagery? No.

Not only are stereotypes overly simplified, but they’re also harmful.

Instead of designing for women, my goals were to design for happiness, rapid data entry, and to help in the discovery of accurate insights. Happiness, because our cultural norm is to pretend like the period doesn’t exist. Rapid data-entry, because the app should be easy to use every day. And great math and in-depth text that’s based on science, because the period is typically an uncomfortable topic, and, due to this, there’s a lot of misinformation.

At the moment, Clue operates on iPhone in three languages (English, German, Danish) and it's working on making it available in three more (French, Spanish, Italian). An Android version is also apparently "coming soon".

When asked about monetization, Tin said that while the startup has a couple of ideas in this area, the focus right now is to scale the app.

A while back, there were talks that Clue was working on a mystery hardware product. Though Tin remained mum on the topic, she did reveal that with growth being the main goal, the hardware project has been side-stepped.

"I think we can take it to a very sophisticated level where we can have high quality data coming into the app and we can start applying all the powers you have with digital and mobile into the realm of reproductive health," said Tin on the future of Clue.

A close-up of Clue, the startup that aims to help women make sense of their fertility cycle
Comments
Follow the developments in the technology world. What would you like us to deliver to you?
All

NEXT
From Russia with video conferencing software: Webinar.ru scores $7.3m from Intel and others
Moscow-based video and Web conferencing…
Robin Wauters