London-based Foundy has raised £1.25 million to support its efforts to become the de facto destination for startups interested in acquisition and hungry investors ready to gobble them up. Furthermore, the new capital is aimed at growing the engineering, marketing, and account management teams.

Perhaps the best way to understand what exactly Foundy does is to look at the FBA acquisition space. Quite similar in a number of ways, instead of just amazon-based e-commerce players that have sent up the flag that they’re open to a buy-out, Foundy covers the whole gamut, and in a statement, specifically points to SaaS and Web 3 properties in addition to e-commerce platforms.

Similar to the rise of FBA conglomerates, Foundy is jumping aboard the increasingly popular strategy of acquisition entrepreneurs, fund managers, and corporate development teams in snapping up startups in light of the rough waters of late. With Deloitte’s The future of M&A, 2022 M&A Trends Survey pointing to, “92% of respondents expect deal volume to increase or stay the same over the next 12 months.” it’s clear that we should expect to see more news arriving in the M&A inbox rather than the funding inbox. 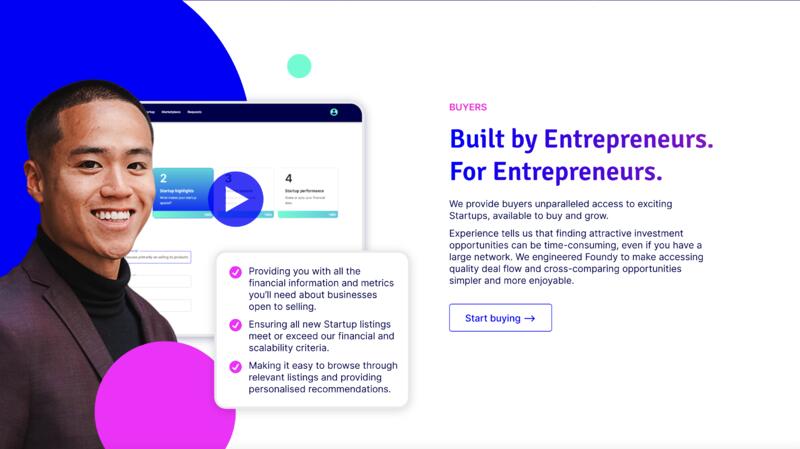 While Foundy was founded by former Zwings CEO and Founder JP Lewin in December of 2021, it says it’s on the, “mission of modernising the M&A industry for startups,” in part, by reducing the time to acquisition, a process that usually takes 9 to 18 months, down to, “as little as 30 to 90 days and at up to 5x lower cost compared to other brokers and advisory firms,” according to Lewin.

As to the first-hand experience in the complexities of an acquisition, Lewin added, “I found that the traditional startup acquisition process is painfully slow and complex for founders, buyers and investors. Foundy is on a mission to alleviate the current issues and modernise the process by providing access to every aspect of the deal lifecycle in an all-in-one platform.”

Apparently, there are a lot of missions happening at Foundy.

Foundy’s £1.25 million round was led by Fuel Ventures, who know a thing or two about the FBA acquisition space, having led a $65 million investment round in London’s Heroes in November of 2020, and supported by an undisclosed, “9 figure exited e-commerce founder turned angel investor.”

“We are excited to be supporting Foundy’s journey. The company will play a major role in the ecosystem as a whole because by helping startup shareholders more easily liquidate their shares via full and secondary buyouts it will, in turn, incentivise more and more people to both work and invest in startups,” commented Fuel Ventures’ Mark Pearson.

Mission central: startup acquisition platform Foundy raises £1.25 million
Comments
Follow the developments in the technology world. What would you like us to deliver to you?
All