Report: What 21 investors have to say about investing in Italian startups

The Italian startup scene is a conundrum.

An abundance of innovation and accessible, highly-educated talent in Europe's 4th – and the world's 8th – largest economy should have sufficed to nurture a blossoming startup ecosystem. Yet, Italy's is only now starting to sprout.

On the European stage, the Italian startup ecosystem is neck and neck with Latvia's. Both recently welcomed their first unicorn, both have similar VC funding per capita, and both are showing great promise in fintech. Credit where credit is due – Latvia is doing a fantastic job. But the economic powerhouse with 30 times the population that is Italy should be operating on another level.

Meanwhile, Italy's peers are riding the wave. The French tech scene is seeing breakout success, the UK is minting a new unicorn every couple of months, and Sweden's VC investment per capita is more than the entire bottom half of Europe combined.

So, has Italy completely missed the train? Well, perhaps not just yet – there's cause for cautious optimism. Every year, new records are broken and the current growth trend resembles that of France and Spain 5-6 years ago. The tech scene is also seeing increased government support, as well as attention from startup events and accelerators hoping to tap into the region's incredible potential.

One such event is TechChill – the Baltic region's largest startup conference – that will take place in Milan for the first time ever on 28-29 September 2022. Ahead of the event, we surveyed 21 Europe-based investors to get their take on the current status and future potential of Italy's tech scene.

But first, to give some context, let's take a quick look at the state of Italian investment.

In 2021, investments in Italian tech startups totaled ~1.4 billion EUR, doubling the previous year's numbers and continuing a trend of steady, albeit tentative, growth.

Current figures suggest that Italy is on track to repeat last year's success, but is unlikely to exceed it by much, despite a stellar performance in H1 2022 that saw nearly 1 billion EUR raised from venture capital – more than twice as much as in H1 2021. Notably, this increase comes off a boost in local investments, rather than piqued international interest, with local investors investing almost exactly twice as much as international ones.

Earlier this year, the Italian government placed 2.5 billion EUR at the disposal of CDP Venture Capital – Italy's National Innovation Fund – as part of a package to support the local tech ecosystem. 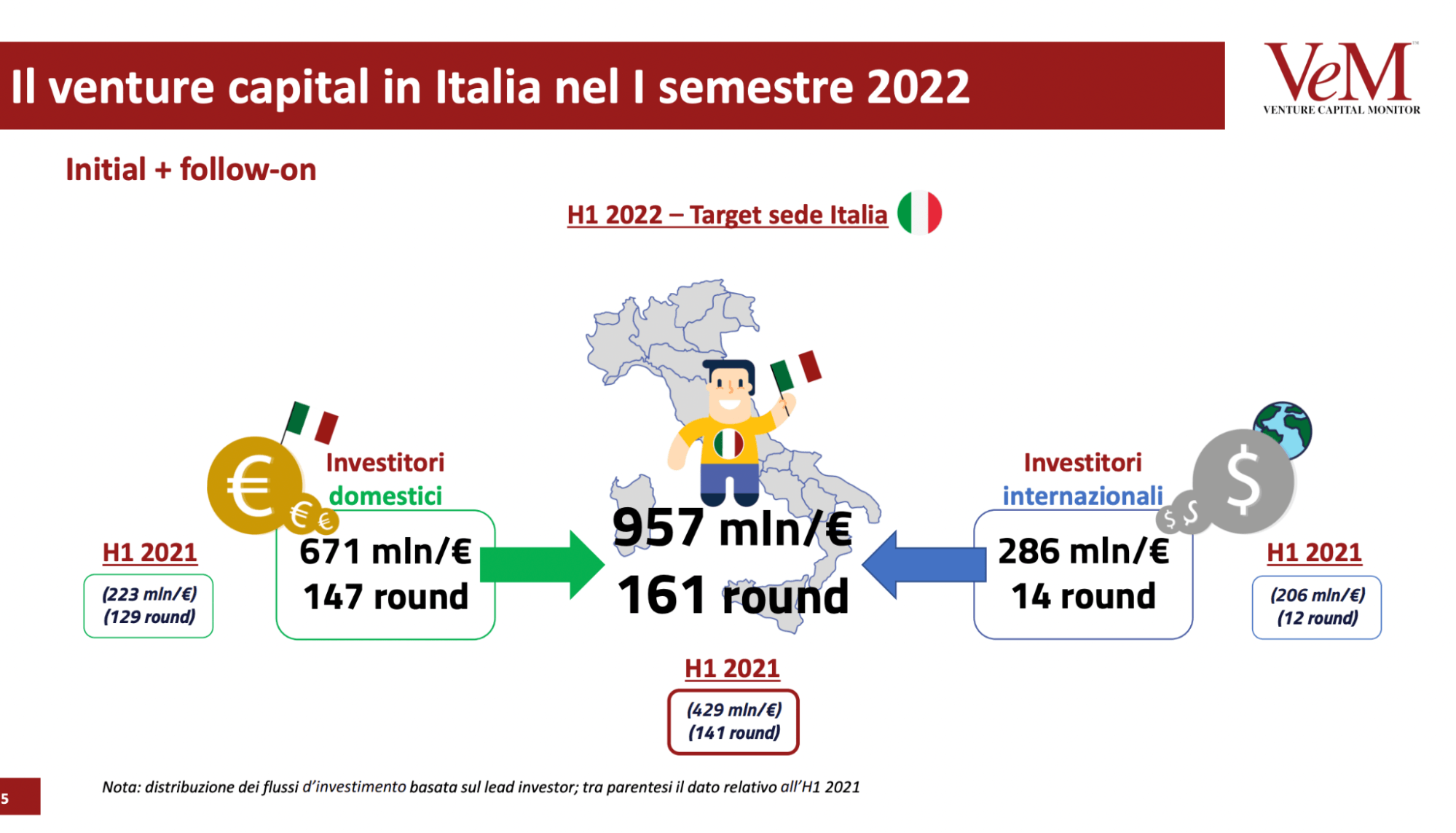 ICT (enterprise technologies and digital consumer services) and fintech are the two verticals attracting the bulk of investor attention, accounting for half of all funding. Other notable verticals include foodtech, healthtech, and energy.

The turbulent BNPL space brought Italy its first resident unicorn earlier this year, after a nearly half-a-billion euro series B by Scalapay. Of its dozen soonicorns, Moneyfarm and Satispay also make a strong case for the country's fintech scene. 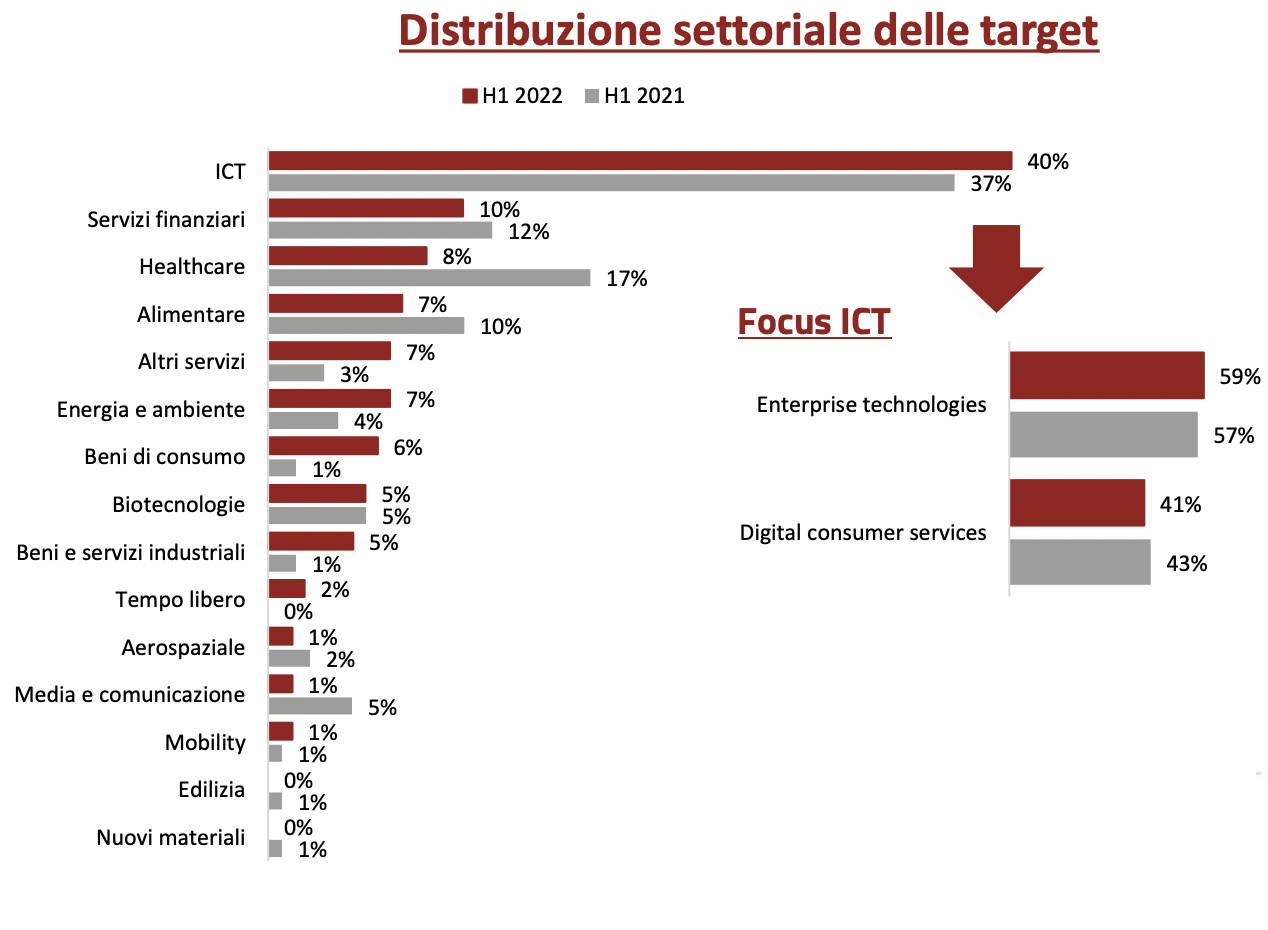 As far as location is concerned, startups continue to gravitate toward the north, and Milan – Italy's financial center – in particular. While the north-south disparity isn't anything unusual on its own, the super low number of funding rounds in the south may point to structural challenges faced by local entrepreneurs and innovators. 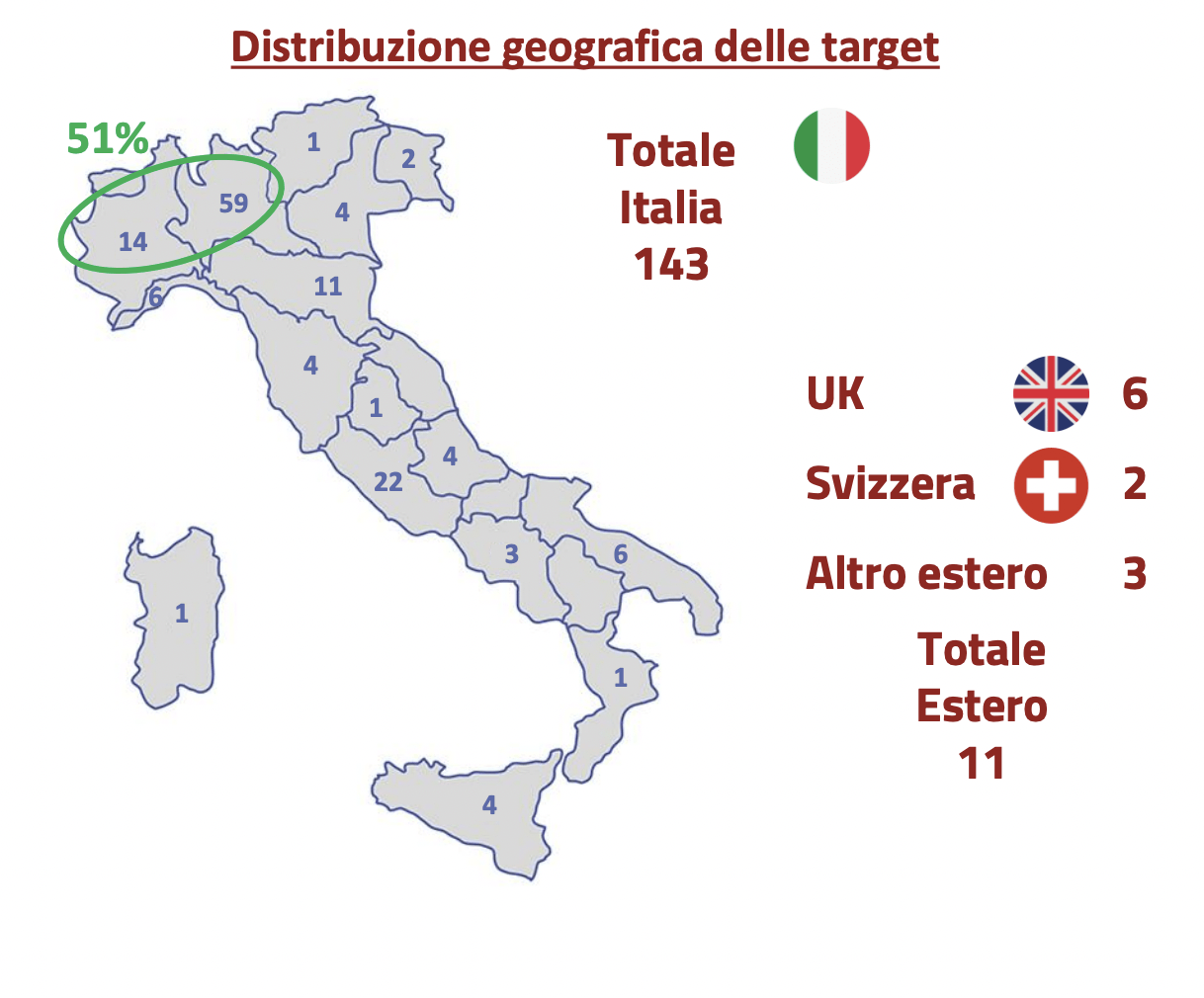 Still, Italy is doubling down on Milan with a 4.5 billion EUR investment in creating a modern, green tech district that will house research labs, a startup accelerator, working spaces, and more, with the aim of fostering collaboration and partnerships among the local tech scene.

But is it enough to woo investors?

We surveyed 21 EU-based VC and Angel investors – a third of whom have previously invested in at least one Italian startup – to find out how they would rate the current state of Italy's ecosystem.

Good news first. The vast majority of investors are open to investing in Italian startups if there's an opportunity suitable for their portfolio. More than half, 52.4%, indicated that they're very likely to do so and another 38.1% said they're likely to invest, with only a single unlikely response.

What startups are they interested in? Climatetech and SaaS were named as the verticals with the most potential in Italy by 10 out of 21 investors, with deeptech (33.3%) and fintech (28.6%) close on their heels. 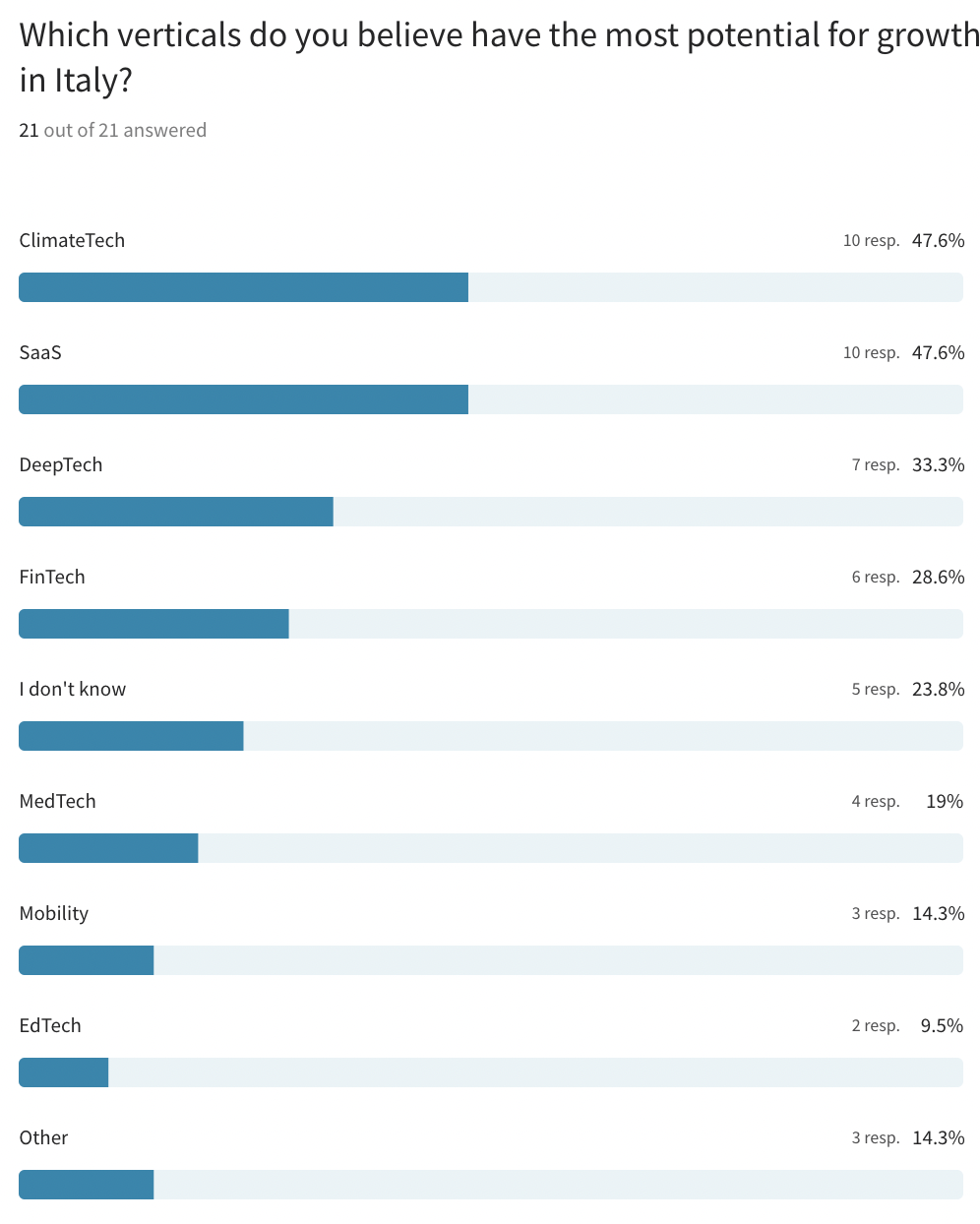 A common thread emerged in an open-ended question about Italy's advantages – talent. In more than half of all responses, access to educated, affordable, motivated, and available talent was noted as a major positive. Low costs, expertise with high-end products, and SME culture were also cited as advantages.

Investors also believe that the Italian startup scene will remain steady throughout the end of 2022, with 38.1% expecting a moderate increase in valuations, 42.9% saying they'll stay the same, and 19% predicting a moderate decrease. While nobody's particularly bullish, a generally positive outlook is nothing to scoff at in the current volatile global state.

That said, investors don't rate the Italian startup ecosystem particularly highly in the context of Europe, giving it an average of 4.8/10 and very few ratings above 6. 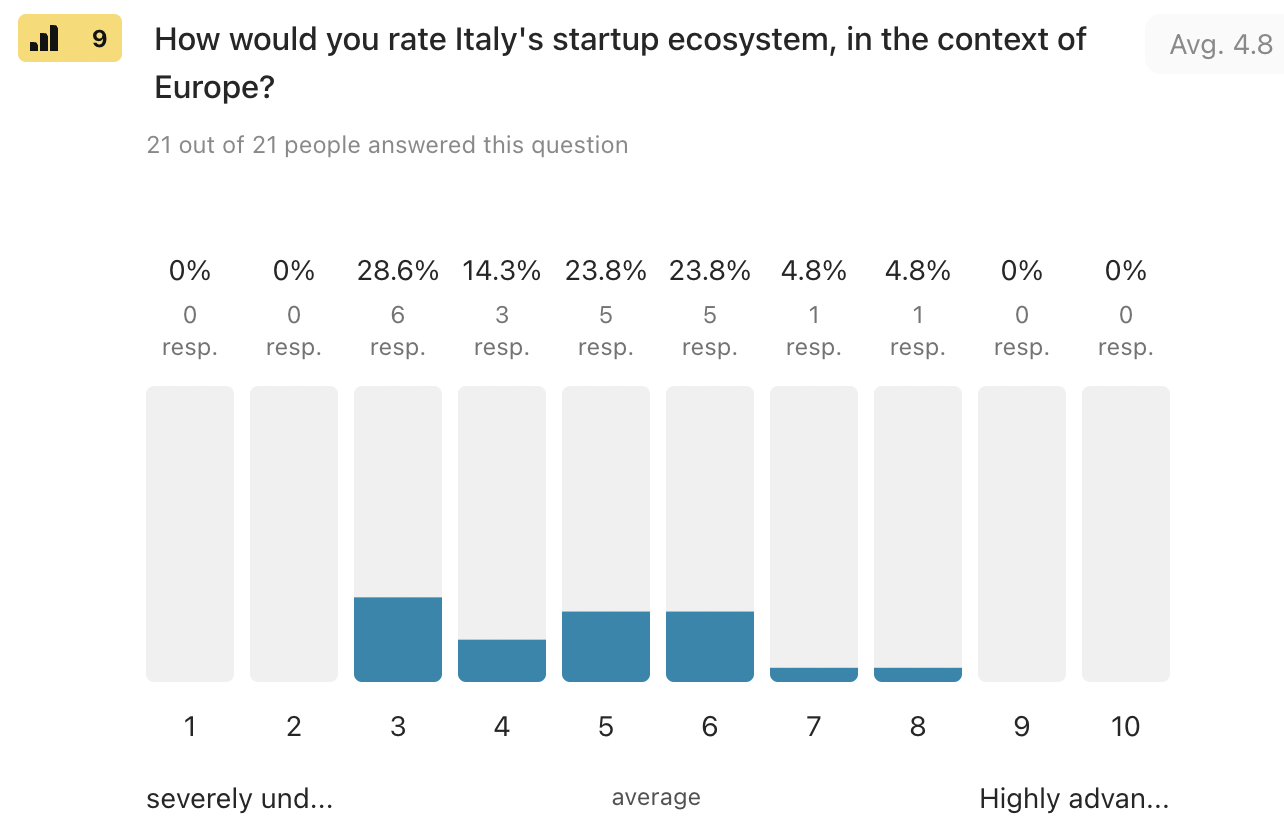 As far as disadvantages go, two stand out. Bureaucracy is one and appears in nearly half of the open-ended responses. An underdeveloped scene is the other, with investors pointing out being disconnected from foreign ecosystems, lack of recognition, lack of structure, lack of reputation, and missing capital, as factors holding Italian tech back.

To summarize, investor readiness to invest and appreciation for the local talent suggest they're keeping a close eye on Italy. But, disenchanted with the current state of the ecosystem, they seem to be holding out for success stories with traction, and unwilling to commit to the laborious task of developing startups from the ground up. For one, they've already done this elsewhere and, two, because they'd be fighting against the current in a scene they perceive to be unstructured and over-the-top bureaucratic.

Accordingly, there's a lot of pressure on individual founders. It's up to them to elevate the Italian startup scene to the global stage and they have to do so with less support and attention than other countries enjoyed half a decade ago.

Additionally, Italy needs to continue working on its own ecosystem – more accelerators, funds, synergies, events. The goal of any sprouting startup scene is to create an environment where bottom-up innovation mechanisms fast-track ideas to early traction, and Italy's is missing exactly that. Hopefully, not for long.

Report: What 21 investors have to say about investing in Italian startups
Comments
Follow the developments in the technology world. What would you like us to deliver to you?
All