The European Parliament is discussing an expiry date for startups 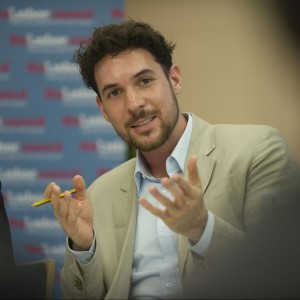 Lenard Koschwitz joined Allied for Startups in 2015. Since then he built up and led the organisations’ public policy activities in Europe. He’s passionate about policy and spends much of his time discussing tech and the Digital Single Market. Prior to that he advised a Spokesperson for Justice and Home Affairs in the European Parliament, mainly on data-related policies like privacy and data flows.

Editor’s note: This is a op-ed / guest post from Lenard Koschwitz, Director of European Affairs at Allied for Startups.

Politicians often look for new ways to resolve deadlock, but this manoeuvre should raise eyebrows: in an attempt to overcome controversies with the Copyright Reform, some are proposing an exemption for startups.

Neither proposal is advisable from an innovation and scale-up point of view, and uses startups as puppets of politics. Despite exhibiting good intentions, making regulatory exemptions for startups is to the detriment of all stakeholders involved. For startups, any regulatory exemption means trouble. For Europe’s ambition to be the scale-up continent, the idea is more of a curse than a blessing.

Before taking a closer look at how an exemption would work for startups, it’s worth reflecting where this proposal is coming from, and in what context it stands. In that light, it’s hard to oversee a phalanx of initiatives that want to make Europe a startup continent (Startup Manifesto 2013, Capital Markets Union, Digital Single Market and a Data Economy package).

Lately, the emphasis has evolved towards scale-ups. The rationale is clear: we don’t only want to be the best place to start a business, but also the place where businesses scale and give back to economies in terms of jobs and tax. And evidence shows that the fruits of these endeavours are beginning to mature, for instance in Portugal.

However, research by Startup Europe Partnership also shows that 94% of startup acquisitions were completed by non-European companies, and 70% of the startups were younger than 5 years. These should be warning signs for European policy makers, because acquisitions happen too soon to bear healthy businesses. Without a scale-up continent, founders rather sell for less than scale their businesses. Therefore, the overall picture of startup policies is still mixed, making the forthcoming legislation all the more important.

The European Commission knows that startups wanting to scale face too many regulatory and administrative barriers. Looking at the regulatory landscape as one important element of the entire startup ecosystem, one might ask what to do. A temporary regulatory shelter (or exemption for startups) is a deceptively easy fix that will ultimately have toxic effects for startups.

The idea that a temporary exemption would allow startups to grow to a size at which they can comply is fundamentally flawed and will create an armada of tiny companies at best.

First of all, the fact that a law needs an exemption implies that it’s a bad law.

Instead of a moderated middle ground, laws working with exemptions have a bipolar effect. While handing a temporary shelter to one group, they overburden the other – both scenarios fall short of the ambition legislation ought to have. Secondly, startups are not only extremely diverse, mobile and often pivoting – they are also a moving target in the public policy sense. There are good reasons why we do not have a special regime such as for SMEs or a static definition for startups. We want startups to grow rather than to stay below a glass ceiling of say, 10 employees or sell after 3 – 5 years for that matter.

To underline the futility of an exemption, let us project how this law would play out for all stakeholders.

Sartup founders would need to consider the expiry date from day one, asking themselves what can be accomplished in the time of exemption (whether this be 3 or 5 years). The certainty that the regulatory load will change tremendously afterwards would impede the company from the outset. It would motivate founders to sell the company before that, or dissuade them from starting in the first place.

Rather than growing sustainable businesses, Europe would stay an early stage nest – as we discussed above. Besides that, startup employees in Europe would be the first to feel the pressure of an exemption. Since hiring long-term employees becomes tougher, startups would hire more freelancers. This is to the detriment of both parties and sadly falls short of the potential of Europe’s brightest talents.

Investors, for their own reasons, would be caught between a rock and a hard place.
While VC funds deeply believe in the respective startups’ idea and team they have to conduct strict due diligence on the viability throughout the next 10 – 15 years, which is the average time-span of funds in Europe. A regulatory exemption would prescribe a sharp drop to every startup investment in Europe, while others in the global market grow.

Ecosystem players like universities, incubators and accelerators would receive short shrift from an expiry date. While future talent, entrepreneurs, developers and engineers might study in Europe, they’ll know that career options are better abroad. Alumni could hardly hope to find a stable job where they received their education, and might look for alternatives outside Europe.

The overarching goals of the Digital Single Market are simplification and harmonisation.

While designing this Digital Single Market not specifically for, but in consideration of startups, the European Union has mostly been on the right track. An exemption could undo the progress made in Europe’s startup landscape. We’ve argued that artificially fragmenting the market through the addition of an arbitrary legal ceiling will be a lose-lose scenario for all stakeholders and will have an effect that is opposite to the intention.

When the European Parliament votes on seemingly popular ideas around startups these days, MEPs should remember that the bottom line is the creation of one single market.

Startups would be thankful for giving them the chance to grow in Europe.