Op-ed: Europe’s prosperity is being threatened by a growing financing gap

If European companies do not reach the scale to directly compete with major multinationals based abroad, we are likely to become marginalised as a continent.
Klaus Hommels 23 February 2022
Share
Facebook Twitter Linkedin

Europe’s wealth and the backbone of our continent’s economy is mainly based on what we call in Germany Mittelstand companies. In English, they are commonly referred to as small and medium-sized enterprises (SMEs).

Two-thirds of European jobs are in SMEs, and they are key drivers for economic growth and innovation.

That being said, a substantial gap in the financing of SMEs has steadily been accentuated in recent years. The gap is threatening Europe’s prosperity and its role in shaping society’s future.

At Lakestar, our aim is to strengthen Europe’s position in these times of digital transformation and to make sure our brilliant tech founders have the capital they need to grow their companies on the continent and beyond.

Lakestar recently delved into this issue in the first edition of our European Financing Gap report. The data reveals the extent of the challenges Europe faces when it comes to the financing of SMEs.

A shift from banks to growth equity investors

Growth companies are fundamentally different today and financing is at much lower levels compared to GDP when compared with historical data.

Back in the 1950s, technical innovation took place in core industries such as automotive, chemicals & machinery. SMEs in these sectors were primarily financed by banks.

4% of our GDP went towards the financing of these companies, which led to the scaling of most of today’s DAX30 – the likes of BMW and Bayer.

However, banks now operate under a different and more restricted regulatory framework. Europe is now at a disadvantage with a lower level of overall financing and hyper-scaling companies as a proportion of GDP up to four times lower than in the post-war period. Banks currently find themselves unable to finance SMEs as they tend to be loss-making.

In the post-war environment, an average company would have scaled at a steady rate for decades. The innovators we are seeing today undergo rapid growth through fast-paced technological leaps, with scaling taking place within 5 to 10 years. We can see such rapid growth being undertaken by major European start-ups like Yapily, a leading open banking infrastructure provider, or accuRx, one of the UK’s fastest-growing start-ups building a healthcare communication platform.

As opposed to innovations from the past, the focus of the modern world is on technology that carries a high share of intangible assets. Banks are no longer permitted to finance such ventures, necessitating growth equity investors to fill this gap.

The domination of foreign capital

The potential SMEs of tomorrow are typically start-ups who have more than €100 million in valuation but require €50 - 100 million to scale their business.

The latest financing rounds of these sector-defining technology companies are frequently dominated by non-European capital. In comparison, the report revealed that European capital only makes up 14% of these rounds, representing a shocking 1.4% of their capitalisation tables. Comparatively, the US has 10 times more financing and value creation per capita.

Europe has a proud history of producing important innovative developments, yet our ability to commercialise and scale these innovations in other parts of the world leaves much to be desired.

The world’s most valuable private tech companies are mostly outside of Europe and major European companies are largely governed by US-based entities. They are in effect exporting the entire centre of gravity of their companies, increasing Europe’s dependence on US infrastructure.

These alarming facts should spur us to fill this tremendous gap, as there are serious practical consequences of neglecting to nurture future SMEs.

The financing gap’s economic, political, and cultural consequences for Europe

If European companies do not reach the scale to directly compete with major multinationals based abroad like Google or Meta, we are likely to become marginalised as a continent. Along with our economic power, Europe’s cultural and geopolitical influence will diminish. Too frequently do we underestimate the potential consequences of not fostering a competitive start-up ecosystem.

Furthermore, we can’t overlook the reality that our lives are increasingly dominated by technology, and our opinions are significantly shaped by the applications we engage with. If these applications are solely based on algorithms developed outside of Europe, we lose our technical capacity as a region to convey our vision in a globalised world, ultimately,  weakening our ability to live by the values we hold dear.

It’s not only promising and influential tech companies that are slipping through our fingers, but companies innovating in the medicinal field or in the food sector. There’s tremendous ground being broken in Europe around lab-grown protein-based food, for instance, or companies paving the way for a sustainable future by presenting inventive solutions to reduce carbon emissions.

Deep tech is another area Europe is helping to lead the way in terms of innovation. Swiss-based start-up Terra Quantum offers “Quantum as a Service” as they develop effective applications of hybrid quantum computing on an industrial scale.

A crucial sector that can’t be overlooked is space tech. Leaving the sector to companies outside of Europe is a massive strategic error that will dilute the continent’s geopolitical sway. We must invest in companies like Germany’s Isar Aerospace who develop and build launch vehicles for transporting satellites into Earth’s orbit.

A dire problem Europe can fix

The half-life of companies on the major US indexes has fallen dramatically, down from 30 years to 13 years. That means that 7% of an index is replaced every year with newer and more modern companies. The DAX index has €1.6 trillion in market capitalization, so we would need to replace around $110 billion per year if we want to be up to par and return to a more competitive ecosystem.

Europe has the foundations and necessary prerequisites to fill this gap. The asset class is broad and deep, proving over a long period of time that it has a superior return.

There are no more excuses to keep turning our backs to this fundamental problem. To match the historic growth financing levels we have seen in Germany, we would need to plug €2 trillion via €100+ billion in annual financing over the next 20 years.

We rightfully plough money into developing a strong talent base and research capabilities across Europe through our world-class universities. It would be such a shame if we can’t viably finance the companies founded by the minds that graduate from them.

The future of European growth financing

We continue to project our influence as a continent, particularly through regulations such as GDPR which is widely respected across the globe. Nevertheless, we run the risk of shunning the financing gap and overlying on regulations to an extent where they actually inhibit innovation and competitiveness.

Going forward, our strategic autonomy relies on Europe’s economy growing at a constant rate. We must consider removing the regulatory hurdles that hinder new asset allocations such as lowering the investment thresholds or creating new models.

The region needs to be best positioned to establish a significant presence in future battleground sectors such as energy, biotech, fintech, or mobility. None of this can be done without the significant growth financing required, an asset class that the broader public needs to be educated on further.

Europe’s digital and technological sovereignty depends on recognising and facing up to this financing challenge. 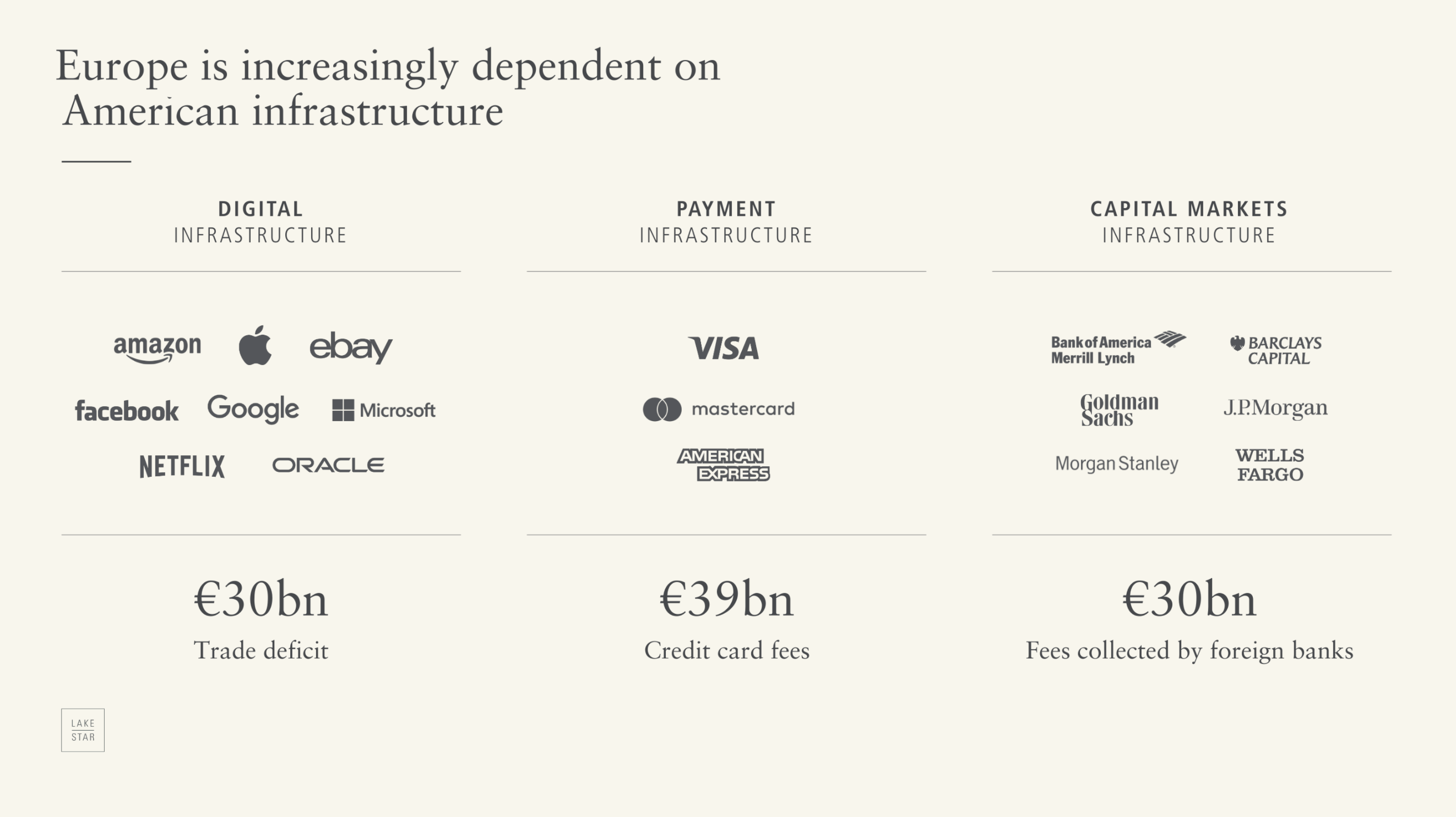 Our ability to govern ourselves and determine our own path will disintegrate if we are solely dependent on American or Chinese infrastructure and technology. Especially as we witness greater and greater polarisation between the US and China. Europe must think less about which side it wants to be on and focus on how we can bolster our geopolitical strength, so that we do not find ourselves at the mercy of the policy of global superpowers.

Whilst considering where we are versus where we could be, I’m truly optimistic for Europe’s future. I’m already seeing investors flooding into Europe who have recognised this gap and see the ample opportunities available.

Europe needs to establish its own digital sovereignty to reduce its dependency on foreign funds and to strengthen control of its innovative tech scene. Despite the ubiquity of technology across the continent, the technology we use in our daily lives is often missing the input of homegrown ideas and values. This notable absence has serious financial, political, and cultural implications if left unchecked.

We are in a global technology race we as Europeans cannot afford to lose.

Op-ed: Europe’s prosperity is being threatened by a growing financing gap
Comments
Follow the developments in the technology world. What would you like us to deliver to you?
All