A Danish startup has launched an investment platform called DealCircle, in an effort to help slash the legal fees racked up in early-stage investments in startups by founders and investors alike.
Robin Wauters 11 February 2014
Share
Facebook Twitter Linkedin

As Europe's startup hubs continue to grow and mature - or, at least, professionalise - the number of companies building platforms to assist founders and investors alike is rising along with the tide.

There are initiatives and companies like f6s (co-founded by tech.eu's Jon Bradford, we should note), Dealroom, crowd-funding platform Kickstarter and investment community AngelList who are both readying a bigger push into Europe, Kima15 - and now there's DealCircle.

Started in late 2013 by a duo of entrepreneurs with a mix of legal and tech experience under their belts, the fledgling Copenhagen, Denmark-based startup is coming out of the woodworks today, announcing a first fundraising round to the tune of $750,000 and launching to the public.

The money comes from people like Alexander Aghassipour, a co-founder of Zendesk, former Just-Eat CEO Klaus Nyengaard, the aptly named SEED Capital fund and 'several lawyers'. Didier Rappaport, a co-founder of popular video site Dailymotion, has joined DealCircle's board of directors as well.

DealCircle was founded by Lars Buch, who previously headed Nokia Smartphones in Denmark, and Bertrand Bisson, a Frenchman and former lawyer.

Its mission is clear as water: it "aims to slash the legal fees racked up in early stage investments in startups, ensuring that entrepreneurs can keep hold of as much of their funding as possible".

A members-only platform, DealCircle was originally conceived last year within the Startupbootcamp accelerator in Copenhagen as a way to allow private investors to present, validate and execute their investments and effectively monitor their portfolios.

The platform is designed to reduce the cost and duration of your average end-to-end investment process, meaning fundraising can take days or even hours instead of weeks, and at a fraction of the cost for both investors and entrepreneurs. 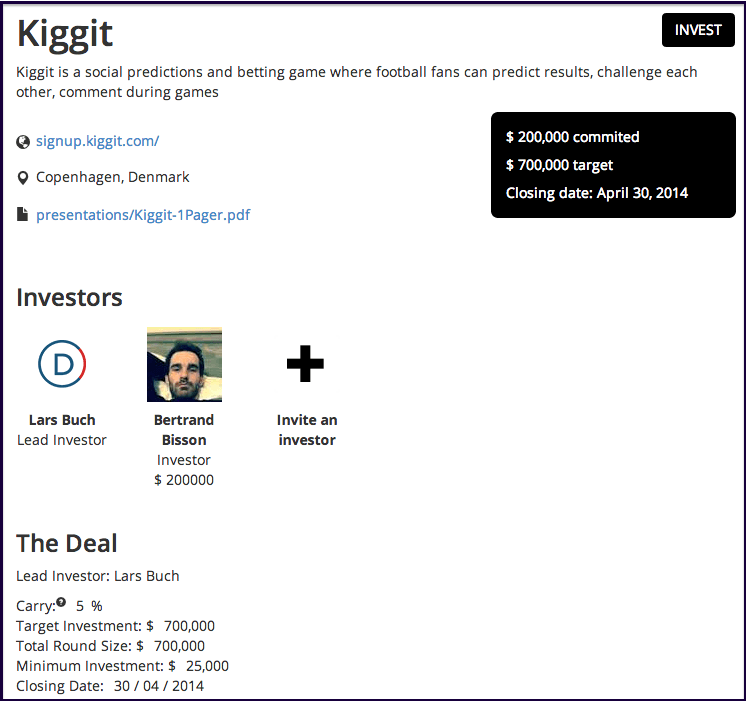 A startup can be invited to DealCircle by a ‘lead angel’, who acts as an ambassador and promotes syndication (this sounds similar to AngelList's Syndicates product). The Danish startup says it will try to maintain an air of exclusivity to DealCircle, to meet the needs of business angel investors who would benefit from quality over quantity.

A mobile version, enabling angel investors to manage their investment portfolio on the go, is said to be in the works. 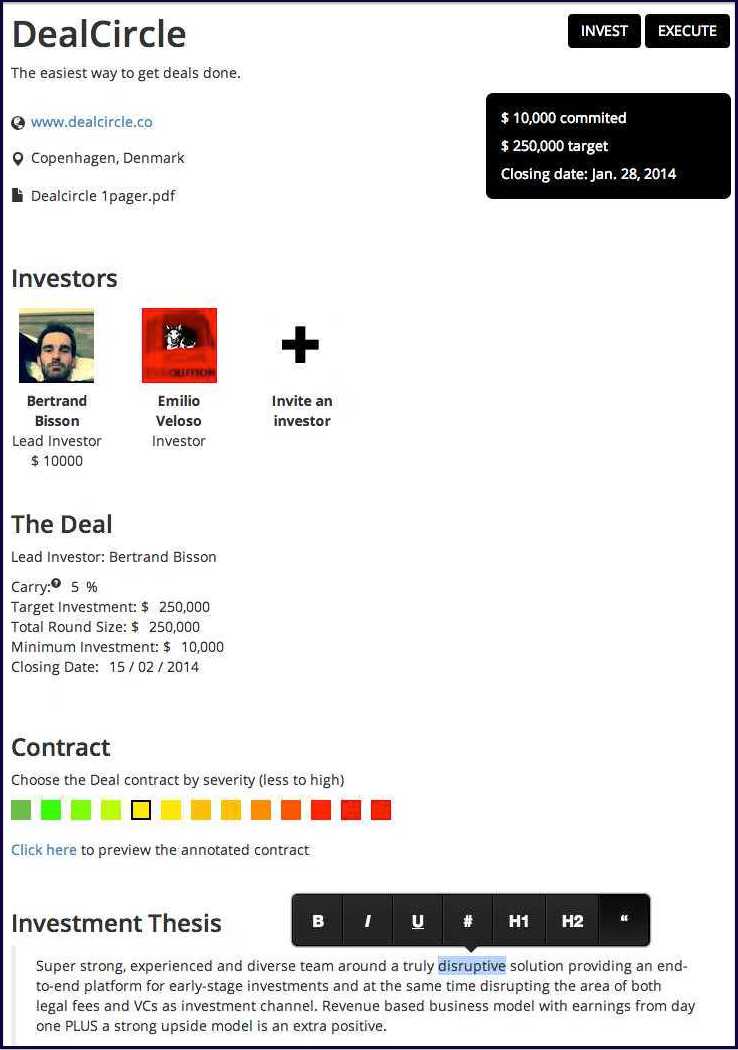 Bisson is said to have created the "radically different" legal model behind DealCircle, validated through an international partnership with law firm Bird & Bird, by spending two years studying the 28 different legislations for investments across the European Union. That must have been fun!

“Investments still feed a greedy ancient legal system, but the world is ready for a serious overhaul,” Bisson posits. Remains to be seen whether DealCircle can be a catalyst for change.

Asked whether DealCircle will compete with AngelList, especially once the latter gets regulatory approval for its Syndicates product in Europe, Bisson said it will much more likely be complementary.

"AngelList is more of a matchmaking platform, and some investments end up taking place offline," Bisson said. "Our solution is focused on helping startups close deals fast, based on solid legal templates, and helping angel investors with market knowledge put 'smart money' in the best startups online."

More information over at ArcticStartup.

Denmark's DealCircle lands $750,000 for its legal fees-slashing startup investment platform
Comments
Follow the developments in the technology world. What would you like us to deliver to you?
All