A report from Vision Mobile says the EU accounted for only 19% of the app economy in 2014 but is still growing at 12% annual growth rate and on course to contribute $16.5b to EU GDP this year.
Robin Wauters 06 August 2014
Share
Facebook Twitter Linkedin

EU countries accounted for 25 percent of the global 'app economy' in 2012 but that number has dropped to 19 percent in 2014, a Vision Mobile report claims. And it's not that mobile apps aren't driving economic growth across Europe, because they clearly are - it's just that Asian countries are fast outpacing the EU in terms of growth in smartphone usage and app downloads.

That's in line with the $17 billion in (direct) EU app economy revenues for this year, as recently estimated by NUI Galway and GigaOm Research in European Commission-sponsored research.

The app economy is growing at an annual rate of 27% globally, according to VisionMobile’s App Economy Forecasts 2013 - 2016 report, with global revenues from apps and related products and services forecast at $86 billion for 2014. 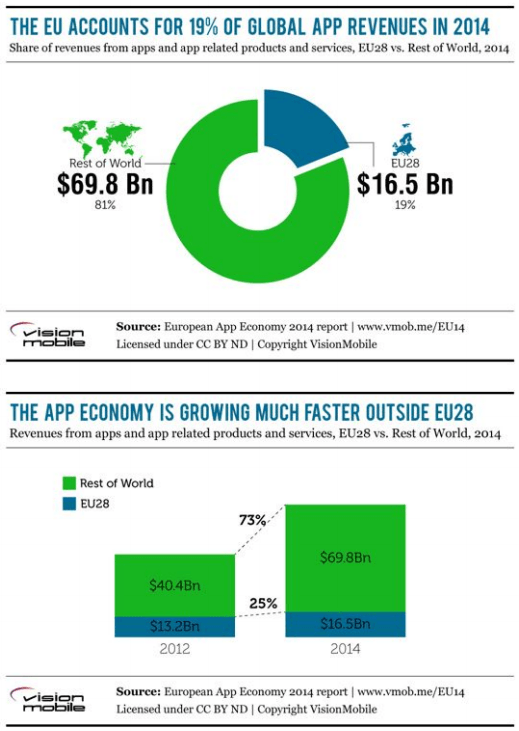 In 2013, Vision Mobile estimated that approximately 530,000 jobs in the EU were directly attributed to the app economy. For 2014, the company estimates that the number of direct app economy jobs in the European Union is 670,000 in 2014, representing an increase of 26%. 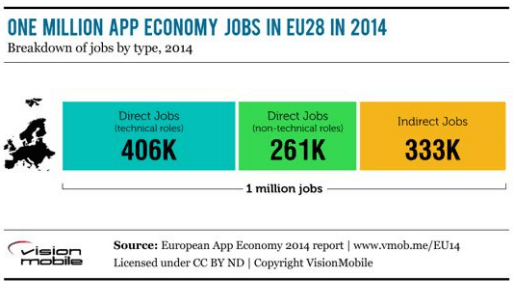 Interestingly, Vision Mobile estimates that at least 497,000 jobs or approximately 50% of all direct and indirect app economy jobs in the EU can be directly attributed to Apple's iOS.

While Android is used by more developers in the EU, the report claims iOS is the preferred platform for 43% of professional developers compared to 35% for Android. 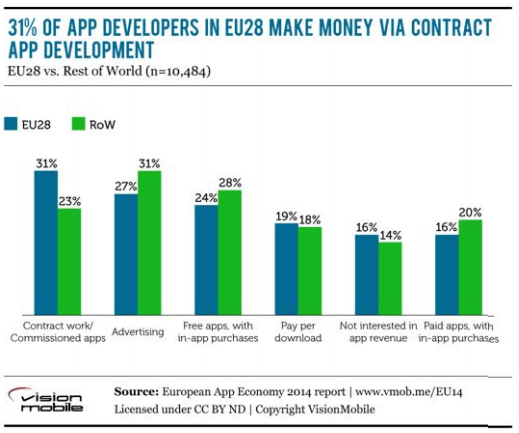 In other, related news, Apple says it is directly responsible for the creation of some 630,000 (mostly new) jobs in Europe and that it has distributed $6.5 billion to developers in Europe since the introduction of the App Store in 2008.

Apple accounts for 16,000 European staff directly - ranging from sales and supply chain management to manufacturing - in a total of 19 European countries.

EU app economy share shrinks to 19% in 2014, but continues to grow at a 12% annual growth rate: report
Comments
Follow the developments in the technology world. What would you like us to deliver to you?
All

NEXT
Right to be found: Google has removed 50 links to Wikipedia content from its European search results so far (after 5 requests)
Last week, the Wikimedia Foundation began…
Robin Wauters