How shiny will the future of Hassle.com be? A chat with CEO Alex Depledge (video interview)

At the recent Web Summit conference in Dublin, we caught up with Alex Depledge, co-founder of London-based Hassle.com, which operates a site that lets people find and book vetted, self-employed local cleaners.

Not unlike cleaning marketplace startups such as Homejoy and Handy in the US, Hassle.com says its main advantages are convenience (you can find, book and pay independent cleaners online and get quick refunds if you're unhappy) and the fact that all cleaners go through a rigorous vetting process to alleviate the inherent trust concerns.

Hassle.com operates across the UK but has recently launched in other major cities in Europe, namely Dublin and Paris, with plans for further expansion in the coming months.

In our interview, Depledge was very open about the early days of the company, when it was moving into a market with a business model that ultimately proved unviable, and the subsequent 'pivot' (which she said I can actually safely call a failure followed by a restart instead).

Describing Hassle.com as a sort of 'Match.com for cleaning', Depledge also talked about how she thinks the startup differs from the aforementioned and other similar marketplaces. 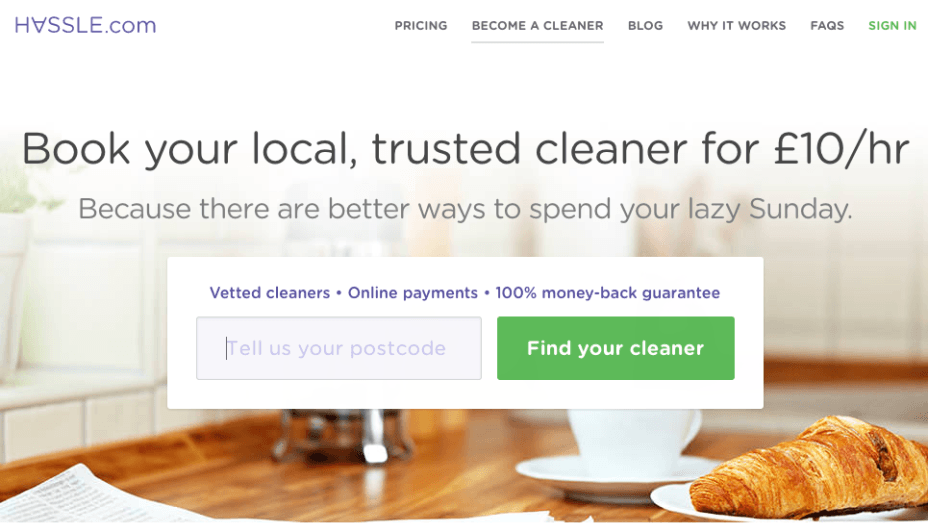 And if you're interested in learning more about how Hassle.com vets cleaners that can be booked through its platform, you're in luck, as Depledge described the process in a lot of detail.

To be fair, this is an aspect of the business that I think Hassle.com will truly need to nail if it's in it for the long haul - simply offering people convenience or paying cleaners slightly more isn't going to cut it if the company wants to position a strong, positive brand and outrun its competitors.

Already, they are at or coming to Hassle.com's doorstep, UK-based Housekeep, Handy-backed Mopp and Homejoy in particular. Europe's favourite startup cloner, Rocket Internet, also believes in the potential and is frantically rolling out its service, Helpling, across the continent.

About the latter, Depledge noted that Helpling has seemingly cloned Homejoy, which she wouldn't consider as similar to Hassle.com. She added that she doesn't feel threatened by Helpling and that "it isn't about land grab or being first-to-market but about depth".

Backed by those beliefs - and a recent $6 million funding round led by Accel Partners - it will be interesting to see how fast Hassle.com can grow in the face of increasing competition.

How shiny will the future of Hassle.com be? A chat with CEO Alex Depledge (video interview)
Comments
Follow the developments in the technology world. What would you like us to deliver to you?
All