It's not just crowdfunding: Europe's online alternative finance market grew by 144% last year to nearly €3 billion; could top €7 billion in 2015

The total transaction volume of the European online alternative finance (equity crowdfunding, P2P lending etc.) market is projected to balloon to €7B in 2015, after growing 144% to €3B last year.
Robin Wauters 23 February 2015
Share
Facebook Twitter Linkedin 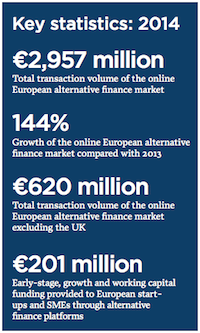 It's not just crowdfunding: Europe's online alternative finance market grew by 144% last year to nearly €3 billion; could top €7 billion in 2015
Comments 1
Follow the developments in the technology world. What would you like us to deliver to you?
All

NEXT
European startups: what would a Digital Single Market mean to you?
There is hardly any topic that the new European Commission VP Andrus Ansip, formerly the Prime…
Robin Wauters