The story behind WeTransfer, the Dutch startup that just landed $25m in funding after years of bootstrapping

WeTransfer is not your average startup, and its founders not your typical entrepreneurs. Meet the Dutch startup that bootstrapped a solid business for years before scoring $25 million in funding.
Charmaine Li 04 March 2015
Share
Facebook Twitter Linkedin

Each time you land on the WeTransfer homepage, you’re served up with a full-screen wallpaper that doesn’t cease to catch your attention.

One time, it was a serene and striking image of a figure cloaked in flowing black fabric standing in an arid landscape shot by a photographer, whose portfolio you could check out when clicking-through the image or her name on the bottom right-hand corner. Another time, it was a blindingly bright and blatant Easter promotion for a skiing vacation package in Austria. Other times, it’s an illustrated ad for WeTransfer Plus, a paid version of the file-transferring service that offers additional features.

But if it’s your first time on the site, it might take a couple of seconds before you realise what WeTransfer actually is – an online file-sharing platform that lets users send and transfer large files.

Having originally gained momentum through its free service, which allows users to share large documents and files up to 2GB in size, WeTransfer has since grown to more than 25 million monthly active users that send about 70 million transfers per month.

It also claims to be “consistently profitable” since 2013. 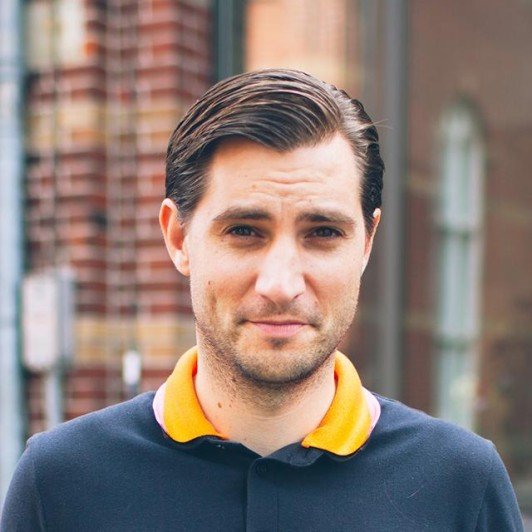 Launched in 2009 by Nalden (pictured) and Bas Beerens, the Amsterdam-based company was bootstrapped until recently when it announced a $25 million Series A round from Highland Capital Partners Europe—which now has a minority share in the company—to fuel growth internationally, particularly in the US.

Following the latest cash injection, we spoke to WeTransfer co-founder Nalden about rolling out a nontraditional advertising model, the importance of design for the company and why it was the right time to take external financing.

“Not a typical tech company”

From the very beginning, the aim was to create a file-sharing service that was simple, intuitive and hassle-free, said Nalden in an interview with tech.eu.

Born as Ronald Hans, Nalden is someone that could be dubbed a ‘digital native’. At the tender age of 13 Nalden started tinkering with websites and at 16 his eponymous now-defunct blog Nalden.net became profitable – six months after he started it.

“Nalden has been my nickname since I was 10 years old,” he explained, “That sort of got out of hand when I started blogging... Even my grandma calls me Nalden.”

His blog has played an important role in WeTransfer as we know it today. Not only did Nalden meet his co-founder Beerens through it, the company's nontraditional wallpaper advertising format stems from his experience with full-screen ads on Nalden.net.

In contrast to typical banner or embedded content ad formats, WeTransfer opts for full-screen images that rotate in the background, aka wallpaper ads sourced from artists, brands and event organisers.

The resulting user experience is a breath of fresh air, especially when compared to those offered by heavily funded competitors in this space such as Dropbox, Box or Hightail (formerly YouSendIt). For starters, there's no sign-up or login button in sight on WeTransfer's homepage and the navigation bar consists of a mere two tabs.

Instead of bombarding users with features, Nalden said WeTransfer focuses more on ensuring people get to know the service in the best possible way – through a cultural experience. And this is precisely how the company wants to use the recent boost of funding to accelerate growth in the US. For instance, it's interesting for WeTransfer when people become aware of the file-transfer platform because Pharrell shared his new album on the platform, he said.

Then again, it's clear the Dutch company is targeting a more creative-centric market than its rivals, who typically offer a wider range of products and look to larger organizations for business.

“The wallpaper ads are a sustainable business model for us, but it’s very hard to scale because you need to deal with people,” said Nalden elaborating on the company's business model.

“For that, we have sales agencies within different regions that deal with media agencies to make sure we sell our inventory. However, next to that, because we have such a large amount of users, a certain percent of them want to have more features, so we created WeTransfer Plus especially for them. It's a subscription-based model where people pay €10 or $10 a month for more features, such as larger transfers, no link expiry and password-protection.”

In addition to WeTransfer's aesthetic, a peek into recently launched initiatives — such as the arts scholarship in partnership with Central Saint Martins or ‘The Creative Class’ video series —and it quickly becomes clear that the intersection between technology and creativity is an important aspect of the company’s DNA.

“We love technology and think it’s a great way to solve problems, however, we think that most people are afraid of technology,” Nalden posited. “We see design as a key tool to help people embrace technology. We’re very much design-driven, much more than we’re technology-driven. We think that through great design and a great user experience, people love using your product.”

From bootstrapping to getting backed

Perhaps most remarkable is that the company was bootstrapped until last month – unlike other players in this space, such as Dropbox and Box, that have received hundreds of millions of dollars in financing to date.

For Nalden, the decision to take the bootstrapping path in the beginning was more common sense than intentional.

"Why raise money when you can earn it yourself and have total control over your business?" he said. "The whole funding part became interesting to us much later. I mean, we're a profitable business and in the end we got funding based on actual revenue, which clearly puts you in a more interesting place to negotiate."

But why did WeTransfer eventually decide to take funding then?

“Most of it has to do with adding a layer of professionalism to your business... Even though we became profitable in our fourth year and didn’t really need the money, we particularly liked the conversations we had with VCs,” recalled Nalden.

“We learned something from every conversation. It’s more because of the advisory and network aspect that we decided to find the best partner, which is what matters to us most,” he added.

Currently, WeTransfer is a team of 30 people in Amsterdam and is now on the lookout for an office in New York. As for the future, he said the company will be working on improving its mobile apps as well as rebuilding and redefining its ecosystem.

The story behind WeTransfer, the Dutch startup that just landed $25m in funding after years of bootstrapping
Comments 3
Follow the developments in the technology world. What would you like us to deliver to you?
All