The European Private Equity & Venture Capital Association released its annual activity report, which is filled with interesting data and insights for 2014. We cover some of the most interesting findings below.
Robin Wauters 12 May 2015
Share
Facebook Twitter Linkedin

The European Private Equity & Venture Capital Association (we'll just refer to them as EVCA) has released mighty interesting data for 2014 in its latest activity report (PDF), which it self-describes as the 'most comprehensive and authoritative source of private equity fundraising, investment and divestment data for Europe'.

In 2014, private equity investment (which includes venture capital) rose to €41.5 billion, an increase of 14 percent, according to EVCA's report.

To wit, the report claims that the number of companies receiving buyout, growth and VC investments reached its highest level in the past 5 years. 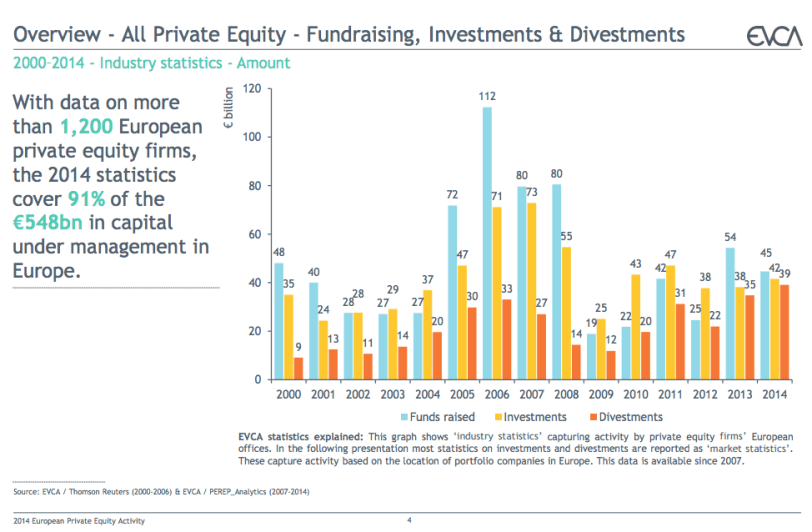 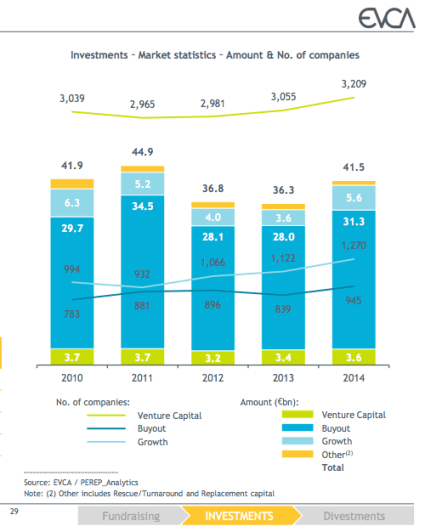 The report, which EVCA claims provides data on more than 1,200 European private equity firms and covers 91 percent of the €548 billion in capital under management in Europe, says more than 5,500 companies across the region raised private equity and VC funding last year. 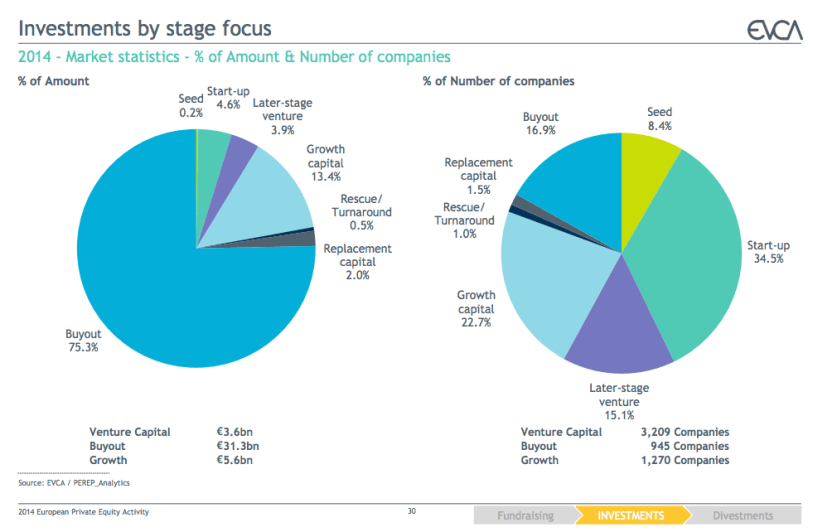 Of these businesses, over 80 percent were SMEs, the EVCA says, and almost half of them attracted private equity funding for the first time.

Venture capital investments made up the bulk of the companies backed, with over 3,200 companies receiving funding as investments increased by 6 percent to €3.6 billion.

The chart below shows the 'geographical flow' of VC investments. 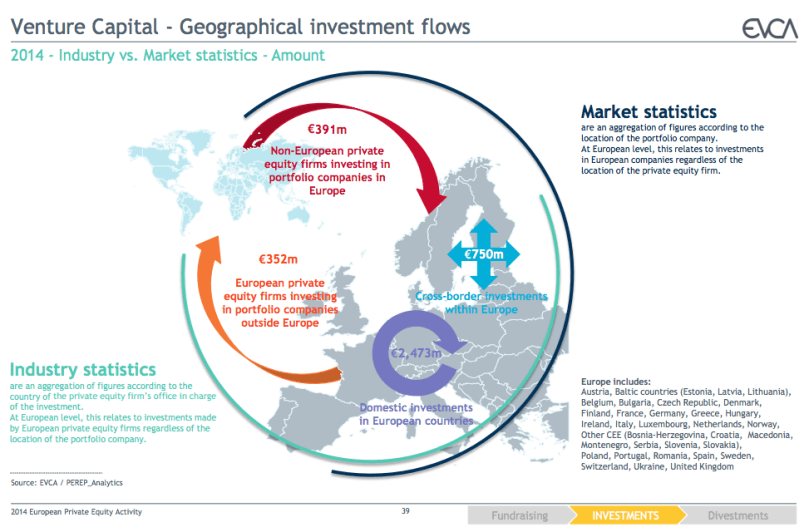 Perhaps more tellingly, private equity divestments reached a record €37.8 billion in 2014, as firms exited more than 2,400 companies. The figure divested at cost is the highest level to date for the private equity industry in Europe and represents a 10 percent jump compared to 2013.

The report claims exits via IPOs more than doubled from 23 to 51 companies, while the amount divested at cost increased by more than 50 percent to €3.3 billion.

As a reminder, tech.eu has just released a comprehensive report on tech exits in 2014, which shows that there were 358 exits by European tech companies last year (of which only 4.75% were IPOs). 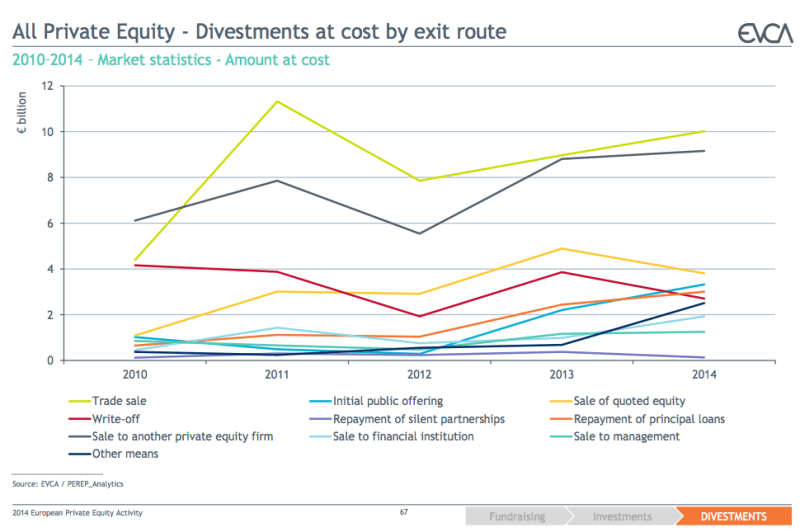 “Private equity and venture capital play an ever increasing role in Europe’s capital markets. In 2014, we saw a clear pickup of investment and divestment activity across Europe, supported by robust fundraising. Against the backdrop of extremely high liquidity in financial markets, our numbers are proof of a strong and stable private equity industry which displays no signs of overheating; the industry will continue to play a central role in the European economy.”

Indeed, EVCA also has tons of interesting data on private equity fundraising, which reached €44.6 billion, its second highest level in the past five years.

The performance is only surpassed by 2013’s post-crisis peak of €54.4 billion, which was heavily influenced by a small number of large funds raised, the EVCA report says.

The number of new funds raised (298) is the highest since 2011, with increases in all private equity segments, including buyouts, growth, mezzanine and venture capital. 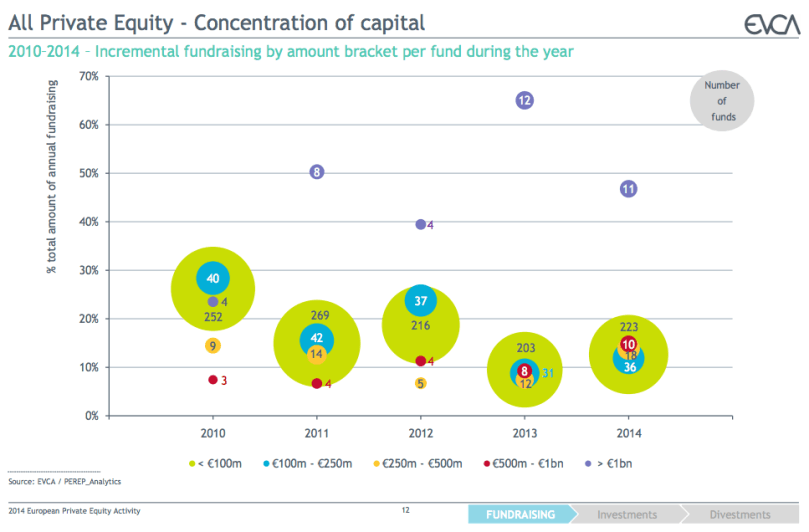 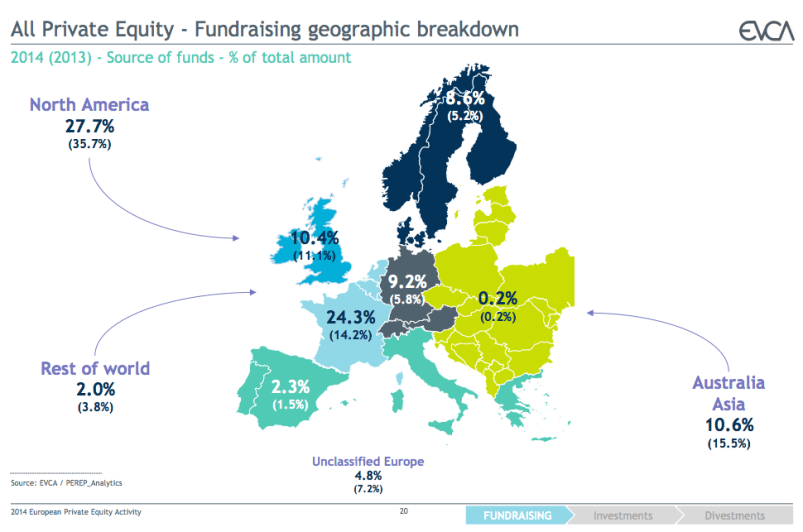 There's a lot more detailed data about private equity and VC fundraising, investment and divestment activity by stage and sector across Europe in the report, so check it out!

Also read and watch: A chat about the future of crowdfunding in the EU with Oliver Gajda, chairman of the European Crowdfunding Network (video interview)

European private equity investment (including VC) ballooned 14% to €41.5 billion in 2014: EVCA report
Comments
Follow the developments in the technology world. What would you like us to deliver to you?
All

NEXT
Big buzz: A photo essay of Berlin Web Week 2015
After seven days of conferences, hackathons and satellite events on topics related to…
Charmaine Li