Guest contributor Serkan Ünsal, a Turkish entrepreneur and author, has taken a dive into the available data on Turkey's startup ecosystem, and compiled some facts and figures for the first half of this year.
Serkan Unsal 04 August 2015
Share
Facebook Twitter Linkedin

Turkey's startup ecosystem has been gaining a lot of momentum in the last two years.

In the first half of 2015, the number of investment rounds increased 50%, while the amount of total early-stage investment grew by more than 200%.

Also see: Facts and figures: the Spanish startup ecosystem in the first half of 2015

Major exits remain rare, but both 2014 and 2015 have seen a fair share of prominent acquisitions of Turkish startups.

In 2014, Pozitron (acquired by Monitise) and Markafoni (acquired by Naspers) were the biggest exits in the Turkish tech space. In the first half of 2015, the unthinkable happened: Delivery Hero bought Yemeksepeti for a whopping $589 million, the largest acquisition ever made in the digital food ordering space. And the best is yet to come; transactions such as those involving Hepsiburada (owned by the Dogan family - minority acquisition by Abraaj Group), Arvento (majority acquisition by Investcorp) and Mekanist (acquired by Zomato) further lifted the spirits of Turkish entrepreneurs and investors alike.

Yemeksepeti and Hepsiburada are the first-generation technology startups of Turkey (established before broadband), and there are several more gearing up for similar exits.

"Most of these startups cut their teeth during tumultuous times with little or no outside funding. The new batch have access to not only more financing alternatives but also a young and increasingly digital consumer market," said Ali Karabey, founder and partner at 212, one of Turkey’s handful of early-stage venture capital funds.

The biggest financing rounds so far this year were made in iyzico (which aims to become Stripe of the region), Modanisa (Islamic clothing e-commerce website targetingthe MENA region) and AnneLutfen (similar to Diapers). 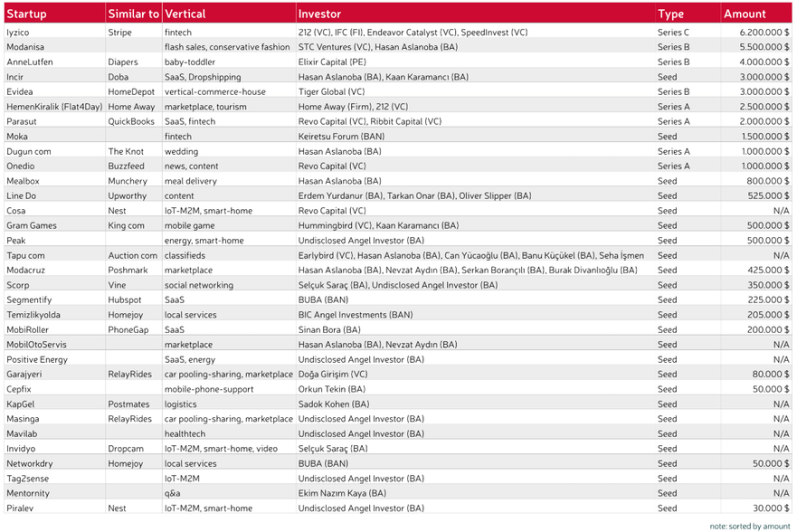 Angel investors and business angel networks were the most active in the first half of 2015. The credit for the increase in activity partly goes to the Turkish government for its accreditation program that started in 2013 and aims to enable angel investors make use of significant tax incentives. Besides, there were some regulatory changes in the government's grant arm so that in the upcoming months taking grants as a fresh graduate will be more systematic and more widespread.

"Things tend to progress slower than they would in a developed market setting. Yet the entrepreneurs are doing a fantastic job disrupting established players plagued by inefficiencies, using Turkey and the region as a test market to launch their products globally. Solvoyo (SAAS supply-chain optimisation) has clients in the US, Europe and Asia Pacific, while Hotelrunner (smart hospitality services in the cloud) is powering hotels across +100 countries," Mr. Karabey said.

212 and Revo Capital are the active investors in those verticals. The new Earlybird Digital East Fund with $150 million is also one of the key indicators that there will be more VC activity in the coming years. 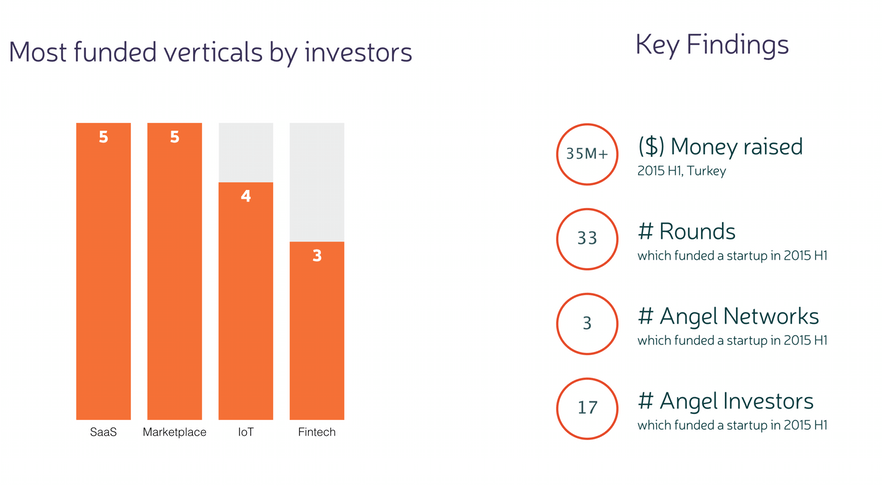 One of the superstars of the early-stage investment arena is certainly Turkey's 'super-angel' Hasan Aslanoba. He made 7 new investments in the first half, having participated in more than 40 startups since 2013.

If you want to know more about who's who about the ecosystem, just check out the below landscape. 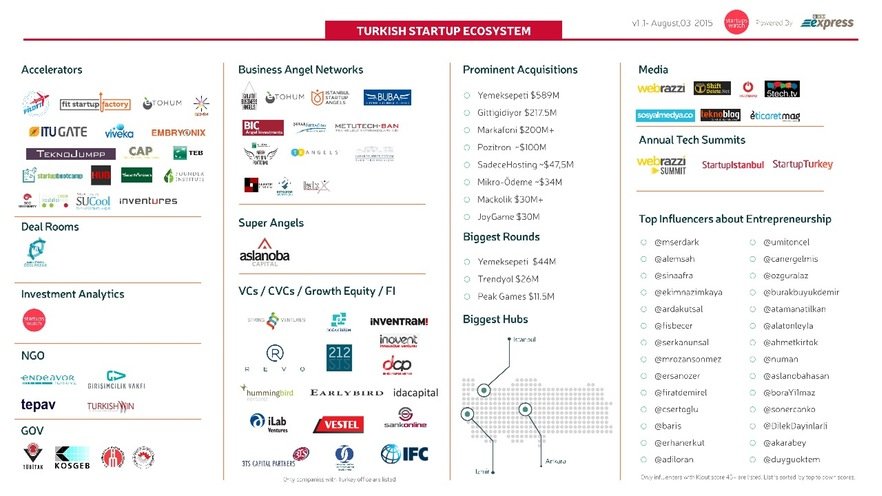 The Turkish startup ecosystem is moving forward on the runway for the last two years, and a few more mega-rounds and global success stories in the upcoming years will help its take-off.

Facts and figures: the Turkish startup ecosystem in H1 2015
Comments 3
Follow the developments in the technology world. What would you like us to deliver to you?
All

NEXT
Here are 10 European 'agritech' companies to keep a close eye on
From cloud software to monitor crops and animals, urban farms and nutrition products from…
Victoria Vzyatysheva