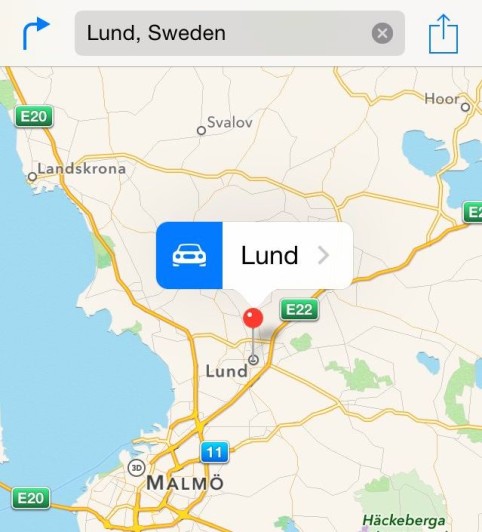 Approximately four years ago, Apple acquired a Swedish outfit called C3 Technologies, a highly regarded company that specialised in three-dimensional mapping technology, about a year before the American technology giant announced that it was replacing Google Maps with a mapping service of its own on all Apple iOS and OS X products.

Now, a report from news agency Rapidus (paywall, via DiGITAL) claims Apple has been quietly ramping up its operations in Lund, a city near Malmö in Sweden, where it is apparently working on 'advanced mapping technology'. Reports that Apple had set up a relatively secretive R&D center in Lund first surfaced in November last year, but it's always been unclear what was being worked on over there.

According to today's report, the focus of the site is clearly on working on the next generation(s) of Apple Maps, with the pace of hiring accelerating in recent months.

Taking a leaf out of Google’s book by putting a fleet of cars equipped with scanning gear on the streets, Apple is driving vehicles around the world to collect data which it says will be used to improve Apple Maps. The company says 'some of this data' will find its way into future Apple Maps updates.

Apple has acquired other Swedish tech companies in the past, most notably data compression tech startup AlgoTrim in 2013 and facial recognition technology firm Polar Rose back in 2010.

Apple is quietly expanding its stealthy R&D center in Lund (Sweden) to work on 'advanced mapping technology': report
Comments
Follow the developments in the technology world. What would you like us to deliver to you?
All

NEXT
A fresh look for tech.eu
It's been a long time coming, but last night we finally flipped the switch on a fresh design for tech.eu. Rather than just giving the website a…
Robin Wauters