Cloud Europe 2017: The Factory is Cranking

Editor's note: this is the second tech.eu guest post from Accel partner Philippe Botteri, who joined the VC firm in 2011 to focus on investments in SaaS, enterprise and marketplace businesses, again with significant contribution from his colleague at the investment firm, Pia d'Iribarne.

Europe is fertile ground for Software-as-a-Service (SaaS) companies, as shown in our comprehensive look at SaaS last year, “SaaS Wars – Europe Awakens”. Since then, momentum has only accelerated, and we’ve published a fresh edition of the top 100 European SaaS companies in conjunction with SaaStock 2017 (happening in Dublin this week).

But, first, let’s take a look at the overall health of the SaaS industry:

12 cloud IPOs in the past 2 years: One from Europe

SaaS companies are thriving in the public markets, with their aggregated market cap growing 3.5x since 2011, and 12 cloud companies going public in the past 24 months.

These 12 have performed well, with an aggregate $2.6 billion in revenues (growing 39% year-on-year) and $25 billion of market cap. Compared to Salesforce, the industry leader, the stats were not too dissimilar over the same period: its market cap grew by $19 billion and its revenue increased by $3.3 billion.

Out of the 12 IPOs, Mimecast is the only company from Europe. However, as Europe’s SaaS acceleration began in 2013, and given that the median time to IPO from this group is 10 years, it will take time before we see a meaningful geographical change in SaaS IPOs.

A healthy funding environment and momentum in Europe

Like the public market, the private funding environment is still at an all-time high in 2017 with an annualised investment rate of $8.4 billion in the US, $2.6 billion in Europe and $0.9 billion in India. Europe and India are growing particularly quickly, and investment more than doubled from 2015, while the US is up 20%.

With a more mature SaaS market and more late stage companies, the US is posting record late stage funding rounds with Dropbox raising $600 million, Slack $200 million and Qualtrics $180 million in the past 18 months. Funding in Europe is healthy but reflects the market’s earlier stage. The largest rounds include Algolia with $53 million, Collibra and Showpad with $50 million each, and CallSign with $35 million.

With a positive environment fuelling the market, this year we extended our research for the Accel Euroscape, the 100 most promising SaaS companies, to look at over 1,000 companies across 12 countries - and included a new category, Security: 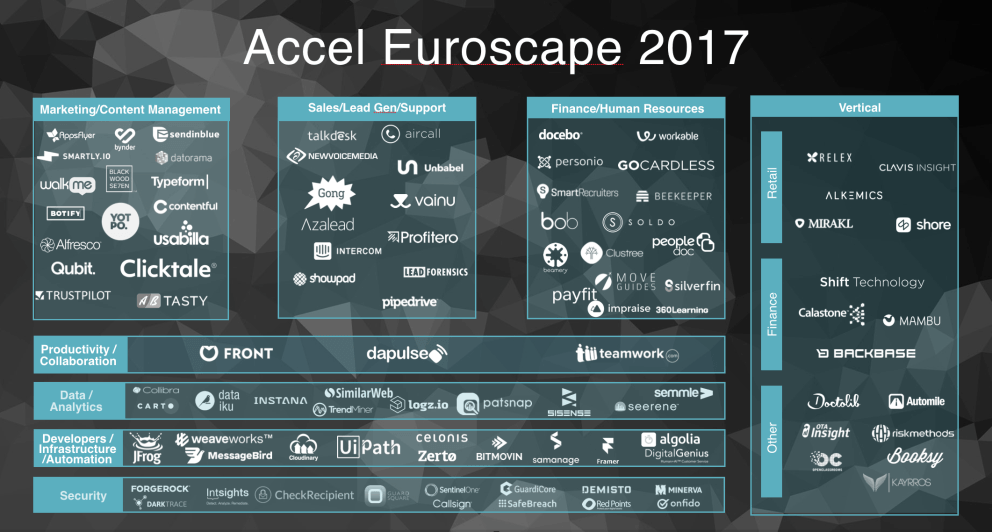 Note: to create the list, we ranked each company by a set of criteria including market attractiveness, level of technology differentiation, strength of the team and initial traction (monthly recurring revenues and growth in number of employees). Nothing is perfect, and we might have missed some great companies. Your feedback is welcome!

Overall, these 100 companies illustrate how the European market is maturing. They have raised $3.4 billion in total, of which $1.8 billion or 53% was in the last two years alone. Close to 60% of them have raised more than $15 million, and 22% have raised more than $50 million, including Algolia, Collibra, Doctolib, Qubit and Showpad. From a revenue standpoint, 58 companies have already crossed the $5 million per year mark and 29 are $15 million+.

From a geographic standpoint, the UK and Israel lead the pack with 20 companies each, followed by France with 18 and Germany with 8. The remaining companies are fragmented across Europe, showing that great SaaS companies can emerge from any city on the continent.

From a funding perspective, Israeli companies have raised on average more than their British (-48%) and French (-160%) counterparts at similar stages. Comparing the list to the top 300 leading SaaS companies in the US, some interesting trends emerge:

- Europe is showing strength in data/ analytics and security, driven by the booming ecosystem in Israel but is less represented in developer/infrastructure and vertical applications.

- In addition, fast-growing US and European companies are reaching $10 million in revenue in similar time periods. Whether Algolia or Twilio and Duetto or Doctolib, they took 1-2 years. 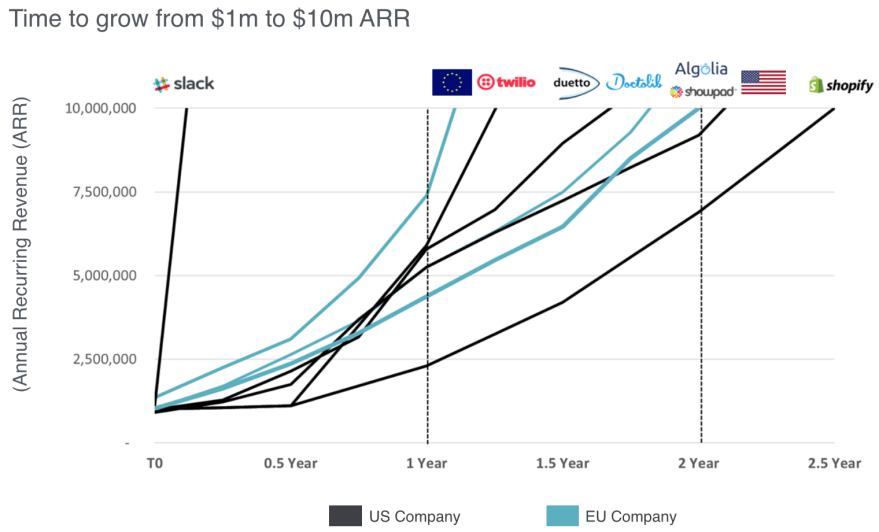 Crystal ball: What the future holds

With the European SaaS landscape moving fast, we’ll continue to see it evolve and believe there are five trends that will define the next crop of fast growing SaaS businesses:

1) AI and Automation-driven productivity: The next generation of AI-driven technologies to improve backend processes is now coming of age, and is seeing fast adoption from Fortune 500 companies redesigning their processes. Large System Integrators are developing dedicated practices to drive this change. Promising companies in this segment include Robotic Process Automation vendor UI Path and process mining software startup Celonis.

2) The rise of the SMB engine: The past few years have demonstrated that companies focusing on the SMB segment can become very valuable businesses – both as public companies, with Shopify reaching $10 billion market cap and Xero, Wix and Hubspot in the $2-3 billion range, or through M&A, with Netsuite acquired for $9.3 billion, Constant Contact for $1.1 billion and Intacct for $0.85 billion.

3) APIs and Microservices-driven infrastructure: Given the increasing need for agility and scalability, micro-services and APIs are taking over infrastructure, and we can expect more companies to emerge in this area, providing API-driven functionality (like hosted search engine API Algolia) or helping to manage this next generation of infrastructure (like Application Performance Management solution Instana).

4) Vertical applications: With the SaaS market in Europe maturing, we expect to see this category develop, and a new generation of services driven by mobile and AI to emerge, such as Shift Technology in insurance, Doctolib in health, Mambo in finance and Mirakl in retail.

5) Compliance and security: With cyber threats on the rise, the need for security and compliance platforms has never been so acute. One of the challenges businesses face is how to enforce security without complicating the ease of use to the point that it becomes a hindrance to productivity. One pioneer is CallSign, which has developed an adaptive authentication platform, getting rid of passwords.

Cloud Europe 2017: The Factory is Cranking
Comments 1
Follow the developments in the technology world. What would you like us to deliver to you?
All

NEXT
Biotech news site Labiotech.eu raises further seed funding
Labiotech.eu, a biotech news resource based in Berlin has secured a funding round from Swiss…
Jonathan Keane