In a new and comprehensive in-depth tech.eu report, we break down and analyse all of the European tech acquisitions, mergers and IPOs we tracked and vetted in 2017.
Robin Wauters 22 January 2018
Share
Facebook Twitter Linkedin

Since we started, one of the key aims of the team at tech.eu has been to track all of the funding rounds and exits in Europe, providing the most comprehensive and accurate record and analysis of the European technology scene.

We do this by meticulously monitoring 150+ sources in Europe and across 12+ languages - including Israel, Russia, the Balkans, Norway, Switzerland, Turkey and other countries we consider part of the European technology industry.

This is our fourth annual report on European tech exits (see 2014, 2015 and 2016), and each has proved to be a very valuable resource for corporates, M&A firms, VCs and other prominent actors in Europe’s ecosystem.

You can purchase the full European Tech Exits 2017 report here for just £150. Please note that premium subscribers get up to 50% discount on tech.eu reports.

Key take-aways from the tech.eu European Tech Exits Report for 2016 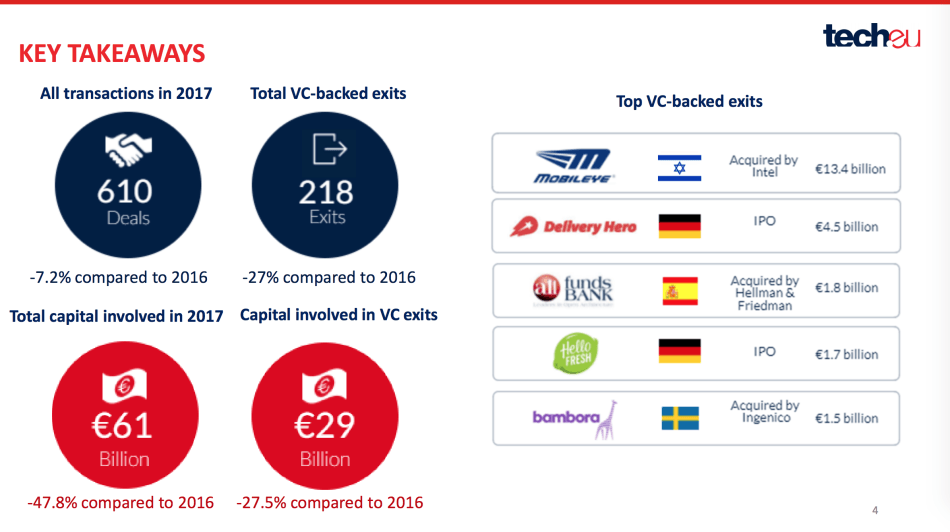 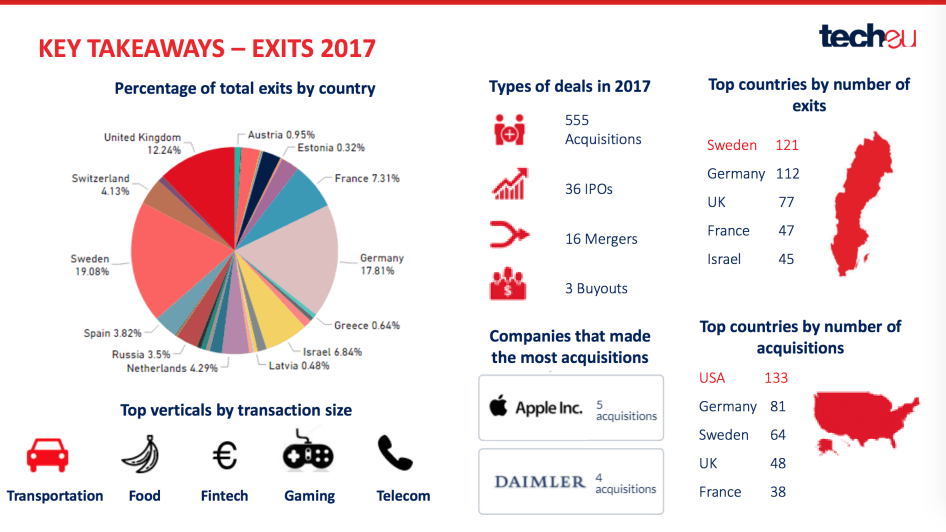 Last year, we monitored even more sources than usual, tracking and vetting thousands of deals to see how European tech is doing with regards to mergers, acquisitions and public market flotations.

Aside from the key take-aways shared above, here are the highlights of the report: despite IPOs by Germany’s HelloFresh and Delivery Hero, and the massive acquisition of Israel’s Mobileye by Intel, 2017 was a very slow year when it comes to exits.

In fact, our carefully collected and quality-checked numbers paint a rough picture: while 2016 was good for more than 700 deals totalling €117 billion, last year only saw 610 deals worth €61 billion in aggregate. That’s a near 50% drop in exit volume, and a more than 7% decrease in number of deals.

In fact, the number of exits for venture capital-backed European tech companies was down 27% compared to 2016, on par with the decrease in volume.

We should note that 2016 was an exceptionally strong year with large disclosed deals like ARM, Supercell and Alcatel-Lucent. In 2017, an unusual high amount of deals were also not disclosed in terms of size, making it difficult (for anyone) to say with absolute certainty that there is a significant problem with exits in the European tech scene, or a worrying decline that means Europe’s startup ecosystems are in bad shape.

We are currently putting the final touches on the report on European tech funding for last year, which paints a very different picture that shows the momentum is still strong in these parts.

Also a noteworthy good sign: the number of IPOs for European tech companies went up in 2017: there were 36 listings, compared to only 26 IPOs in 2016.

For the full report, providing you with a lot more data and insights on European tech exits that happened throughout last year, please go here to purchase a copy for only £150.

This is just a small taste of our comprehensive report into Europe's exit scene, so what else can you expect?

European Tech Exits Report: 2017 was a slow year for EU tech M&A with only 610 deals worth €61 billion
Comments
Follow the developments in the technology world. What would you like us to deliver to you?
All

NEXT
These were the 10 biggest European tech stories this week
Happy Sunday! This week, we tracked 64 tech funding deals worth more than €829 million, as…
Robin Wauters