38% of European tech firms have frozen most or all recruitment as the pandemic rages on: study

European recruitment platform provider talent.io has surveyed 832 tech companies located across London, a number of cities across France, Berlin, Munich, Hamburg and Amsterdam to get an idea of what is happening to tech recruitment during the global coronavirus outbreak.

In its report, which you can access here, talent.io concludes that nearly 40% of technology companies across Europe – including large enterprises, startups and scale-ups – are freezing most or all tech recruitment in light of the pandemic.

With 27%, the second-largest group reported minimal impact to tech hiring - meaning that the majority of the hiring for these companies would continue as previously planned. Only 3% reported a positive impact on hiring activity. 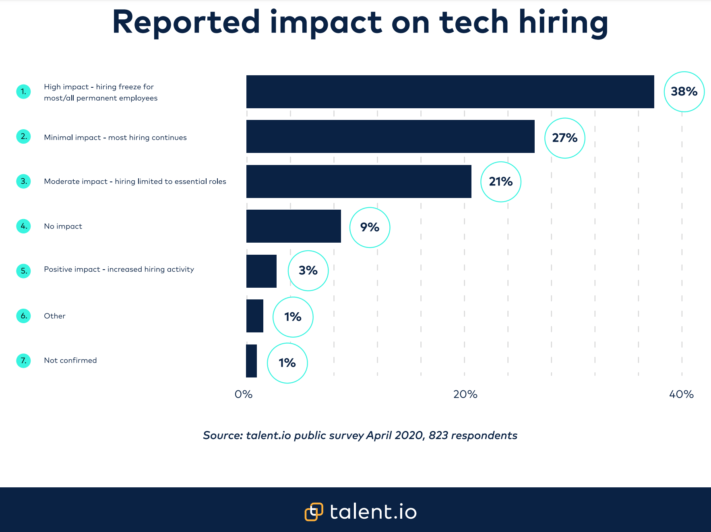 Interestingly, talent.io also monitors European job boards such as LinkedIn, Glassdoor and Indeed on a weekly basis for intelligence on the tech job market. In the beginning of March, the company observed over a 50% drop in the number of companies posting new tech job listings.

In London alone, there has been a 57% drop in the number of technology companies creating new job listings, the company added. This compares to about 55% in Berlin and Munich, 45% in Paris and 70% in Amsterdam (the highest drop of the surveyed major cities). 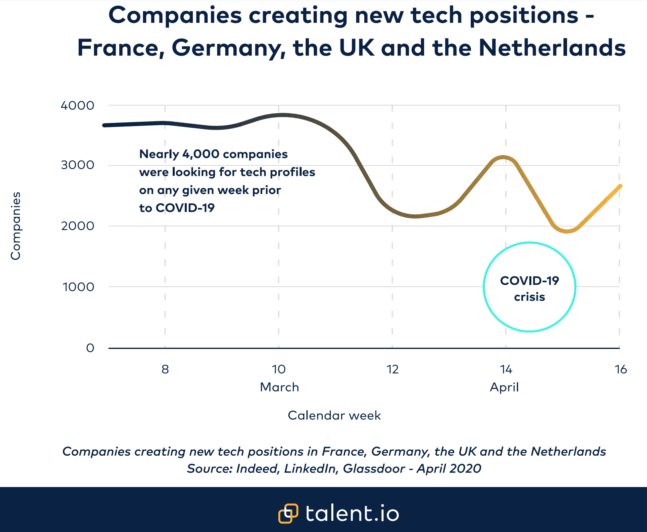 "Our insights into the state of the recruitment market reveals the harsh reality of the current pandemic," commented talent.io co-founder Jonathan Azoulay. "What’s concerning is that London, which is one of the most important tech hubs in the world, is one of the hardest hit regions in Europe."

Meanwhile, a separate and recently released report from Beauhurst, which analyses investment activity of the UK's fastest-growing companies, says 22% of jobs in high-growth tech companies were under 'severe to critical risk' – equating to 615,000 people in the UK who could lose their jobs. On top of this 22% in the high-risk category, a further 39% of jobs are moderately at risk.

- A survey among Belgian startups paints a bleak post COVID-19 picture; 50% says they’ll run out of cash by September

38% of European tech firms have frozen most or all recruitment as the pandemic rages on: study
Comments
Follow the developments in the technology world. What would you like us to deliver to you?
All