Listed: every investor that inked a deal with a European insurtech startup or scale-up in 2020

In 2020, the European insurtech industry remained very active, with over 70 funding deals announced. Interestingly they were quite balanced in terms of maturity: 26 seed deals (<€2m), 31 early-stage deals (€2m-€10m) and 19 growth deals (>€10m). Beyond industry specialists (e.g. fintech funds: Speedinvest, Blackfintech and Anthemis, or insurtech-only investors: Mtech Capital, InsurTech Gateway or astorya.vc) there were many agnostic VC that invested in the space.

To help you get a comprehensive view of that ecosystem, we are happy to provide you with an exhaustive overview of every investor that was active in the European insurtech scene in 2020. Based on astorya.io's market watch tool, every deal announced was spotted and analyzed, to build that list of 62 investors. You will find a mix of local, pan-European and even global players, or can easily assess VC's sweet spots based on their recent activities. 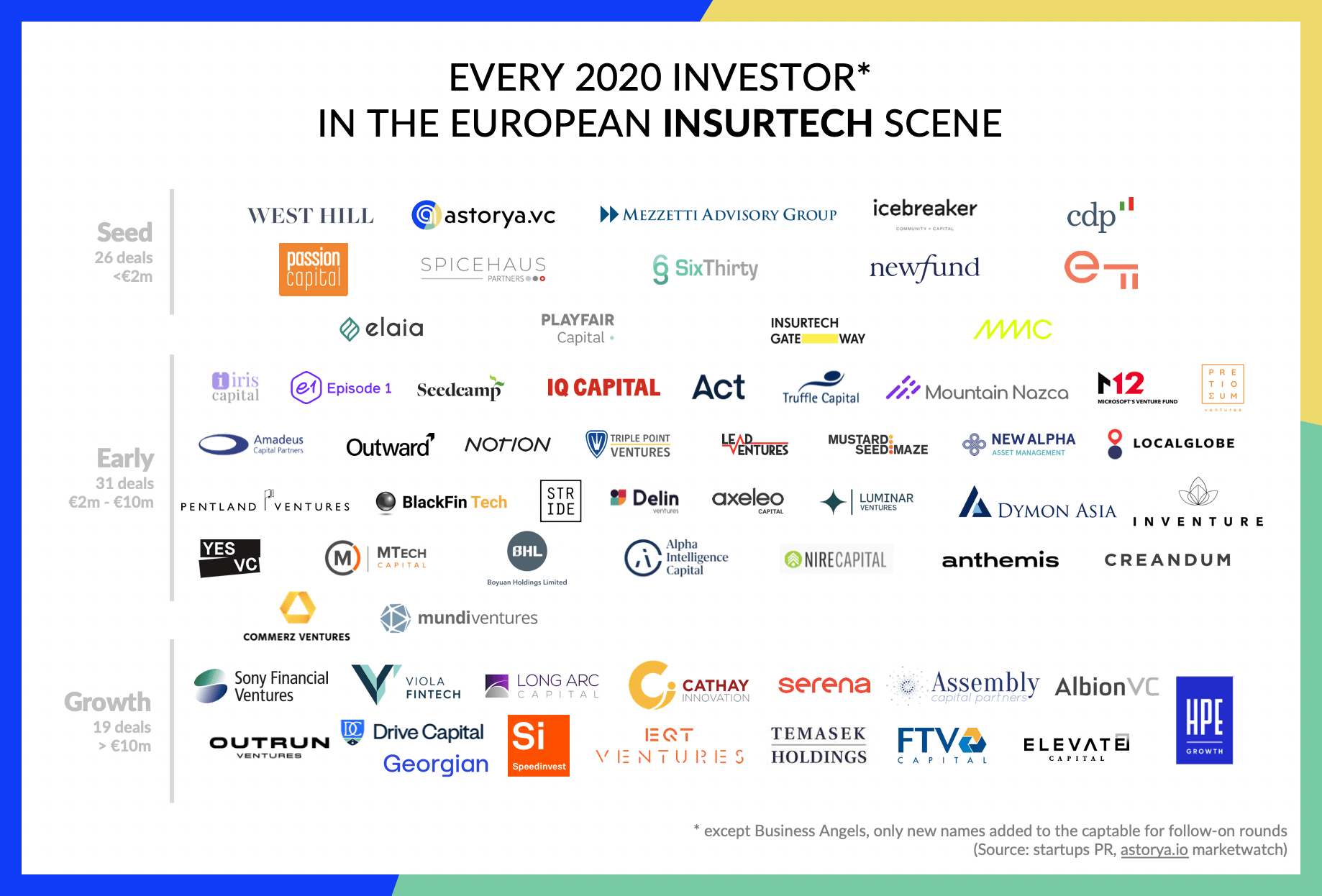 In addition, here are the insurtech startups that raised the biggest funding rounds this year, by month of announcement:

Interestingly, every part of  the insurance value chain are covered with these biggest deals, from price/product, to underwriting, distribution and claim.

Also check out our list of some of the hottest (non-obvious) European insurtech startups.

Considering global investment in the insurtech market: $2.5B both in the first half of 2020 (learn more) and in Q3 2020 only (learn more), it seems three trends combined there: insurtech startups have delayed their rounds as much as possible due to the COVID-19 crisis, others delayed the announcement of their closing, and a few are struggling to raise money.

And even if most probably 2020 full year will be flat or below 2019 ($6.3B last year, learn more) in terms of dollar invested globally in the insurtech scene, next year might be very active as the current crisis has accelerated both insurers' interest in B2B insurtech solutions (the "augmented insurer") and customers' move online, where B2C insurtech startups have raised big rounds (at least for the fastest growing of them, learn more).

Listed: every investor that inked a deal with a European insurtech startup or scale-up in 2020
Comments
Follow the developments in the technology world. What would you like us to deliver to you?
All