Tech.eu Insights creates insight and guides strategies with its comprehensive content and reports. Browse popular Insights content.
Examine the effects of the latest technology with the Tech.eu lens, see the details and create powerful strategies. Take immediate action to access exclusive articles and reports.
Review Advantageous Packages
Does your company have Insights access? Check it
Data Analytics
Sponsored by UiPath

With funding on the rise for automation companies across Europe, UiPath is on the hunt to champion promising startups

Editor’s note: This is a sponsored article, which means it is independently written by our editorial team but financially supported by another organisation, in this case, UiPath. If you would like to learn more about sponsored posts on Tech.eu, read this and contact us if you are interested in partnering with us.

In the beginning of this year, we ran a guest post by Tom Henriksson, GP at OpenOcean, a venture capital firm investing in European data-intensive software startups. In the op-ed, he discussed how 2020 was a 'watershed year' for the expanding ecosystem of intelligent automation software.

Right he was, and there are no signs of a slowdown just yet.

We took a deep dive into our database for all things automation software and identified close to 300 companies in Europe, who've raised more than €4 billion in aggregate funding since we started collecting and vetting data on the category in 2016.

We looked at privately-held automation software ventures in Europe, excluding companies in the hardware and robotics space, and saw that funding is clearly on the rise, albeit mostly for startups in the early stages of their development (more on that below).

We also tracked 16 exits in the European automation software space, and that number is likely to increase quite a bit in the coming years. 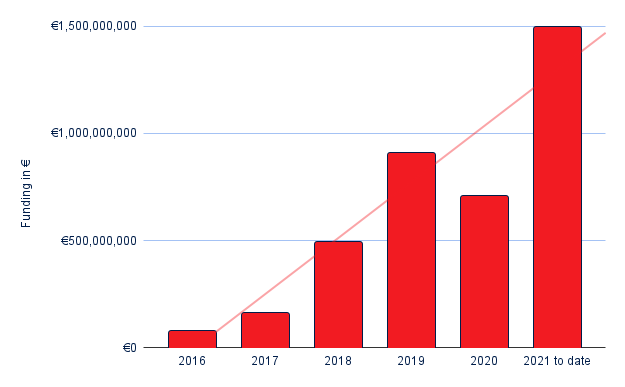 Most of the funding flowed to Romania, but of course mostly to one company: UiPath. 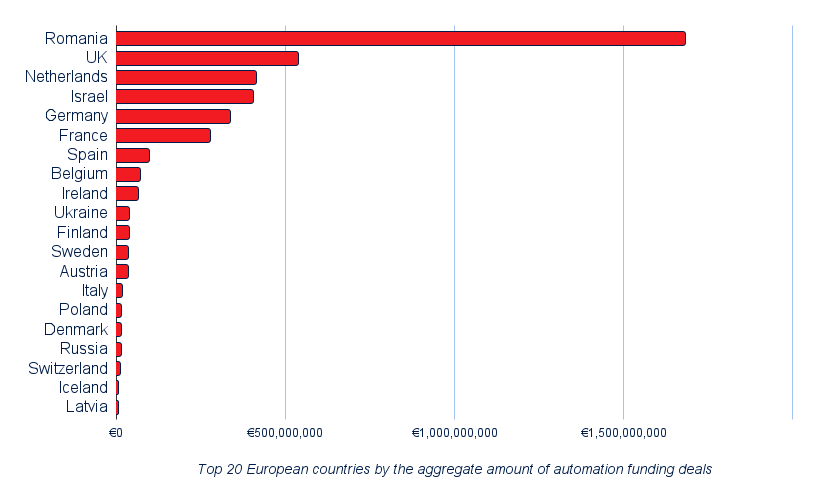 Take them out of the equation for a minute, and you get this chart instead, which shows the usual suspects like the UK, Germany, France, Israel and Spain leading the pack - alongside The Netherlands, we should observe. 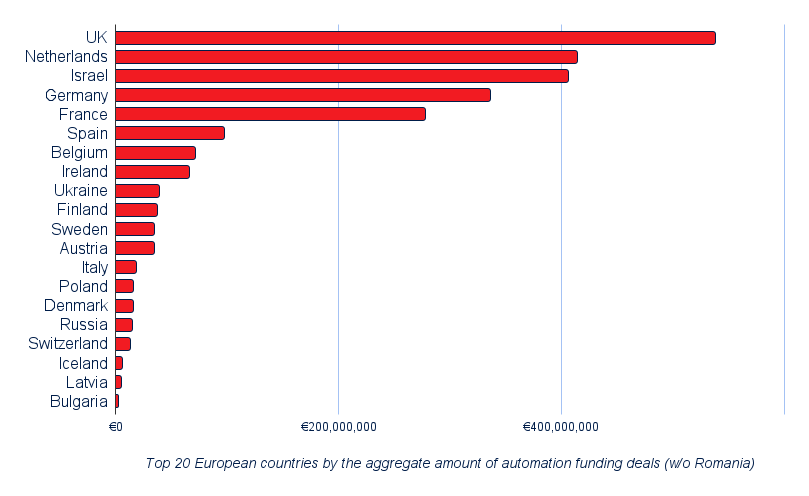 Looking at the sheer number of automation software companies we identified in Europe, the picture that's painted shows there is healthy activity all over the map. 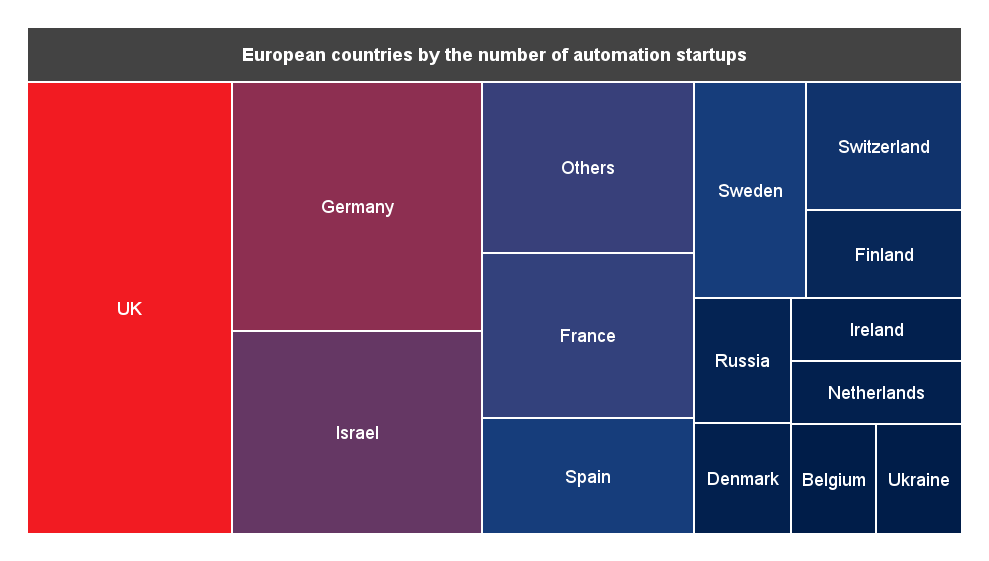 When you zoom in on the Central and Eastern Europe region, combined with Turkey, the number of automation software companies is mostly concentrated in Ukraine, Poland, Estonia and Romania.

Also in this region, financing for automation software firms continues to rise, both in the number of rounds as in total aggregate funding. As you can see, 2021 is shaping up to be quite a year for European companies in the enterprise software automation sector. 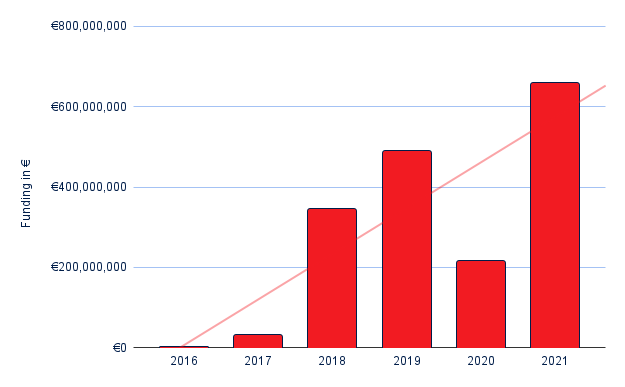 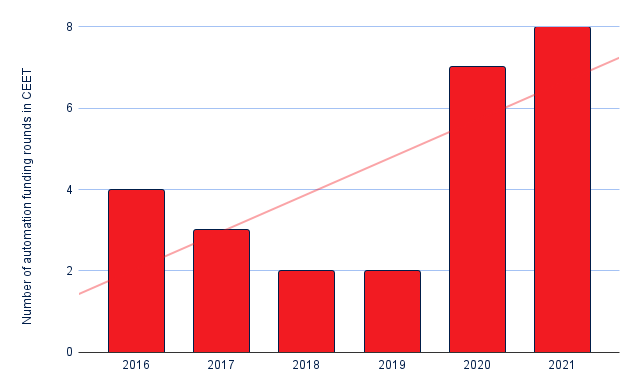 We should note, however, that the sheer number of automation software companies in the CEE region and Turkey region remains low - only 20 or so out of the nearly 300 we tracked thus far.

Combined with the sheer amount of tech talent present in, and continuing to emerge from the Central and Eastern Europe region, Turkey included, a boom in automation software startups and scale-ups is to be expected.

In fact, the funding statistics indicate that there are already quite a number of automation software emerging out of the CEE countries as well as Turkey, and UiPath, a behemoth in the space, wants to help identify and scale them.

With this in mind, UiPath has launched the third edition of its annual UiPath Automation Awards, a competition designed to champion the most promising startups and scale-ups in the field of enterprise software automation, where the Romania-born company has made its own mark over the years.

Zooming in on the Central and Eastern Europe region and Turkey, UiPath is on the hunt for interesting B2B software automation companies to enter its awards competition before the September 1 deadline. The mission of the UiPath Automation Awards 2021 is to enable the further development of creative business ideas and 'foster the capacity to scale early-stage companies and entrepreneurial ventures from those regions'.

Itself founded out of a small apartment in Bucharest back in 2005, UiPath may be an outlier in the CEE region, but it's far from the only scale-up in the space when it comes to Europe as a whole (though of course an enormous heavyweight, particularly after its recent IPO).

Take Redwood Software for example, a Dutch software firm that offers a range of cloud-based business and IT process automation solutions that secured €315 million in growth funding earlier this year. Or Berlin-based automation and cloud-based open source software provider Camunda, which closed an €82 million Series B round led by Insight Partners back in March. There's more where that came from, and many more waiting in the wings.

This is quite apparent when you look at the chart below, which shows that most of the automation software firms in Europe are still in the early stages, at least when it comes to financing. 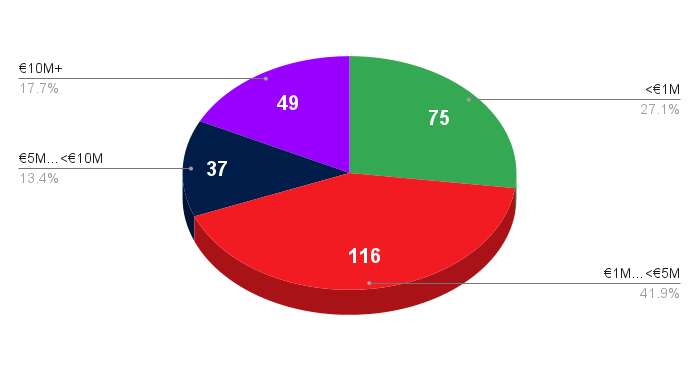 Those who enter UiPath's competition and emerge victoriously can expect their help in levelling up. The company will provide the winners in the startup category of the UiPath Automation Awards with mentorship, a €50,000 cash prize, and substantial tech and marketing support over a period of 12 months.

The scale-up category winners will receive C- level mentorship, sales and marketing support, including the opportunity to present the winning technology to UiPath global clients, and have their winning solutions featured in the UiPath Immersion Lab.

Tech.eu is partnering with UiPath to help stage the competition at the upcoming edition of Wolves Summit, which will take place both online and physically in Wroclaw (Poland), on the 20th of October 2021.

Applications for the UiPath Automation Awards 2021 can be submitted here; you have time until the 1st of September to toss your hat into the ring.

With funding on the rise for automation companies across Europe, UiPath is on the hunt to champion promising startups
Comments
Follow the developments in the technology world. What would you like us to deliver to you?
All

NEXT
Tech.eu Podcast: The rise of climate intelligence with Iggy Bassi, Cervest
The Tech.eu Podcast is a show in which we discuss some of the most interesting stories from the…
Andrii Degeler