Badoo by the numbers: 200 million users and $200m in annual revenue on strong mobile usage growth

Badoo, a social network that revolves around helping people "make new friends" (and find matches for dating and other purposes), has been growing steadily since it was launched now nearly eight years ago.

That in itself is quite a feat - the social networking space is cut-throat competitive and many others have faltered trying to compete against the Facebook and Twitter steamrollers of this world.

Not so for Badoo, which was started by a Moscow native but is headquartered in London, UK: it is expected to cross the 200 million users milestone some time this weekend, and continues to sign up new users at a rapid clip (100,000 per day at present, according to a company PR).

The 200 million users is just a number, but it does place Badoo in the top echelon of social networks: BI Intelligence pegs the total number of active monthly Badoo users at 45 million, ahead of Orkut, Foursquare and Vine, though miles behind the likes of Facebook, Tumblr, LINE, WeChat and Instagram.

One thing Badoo has going for it is its ability to attract young adults aged between 25 and 35 (the demographic it has seen the fastest growth in) from all over the globe. Today, Badoo is used in 44 languages across 191 countries and may be slowly chipping away at Facebook's dominance, at least in certain socio-demographics.

One has to acknowledge that Badoo may have a sizeable user base, but it's struggling to gain massive name and brand recognition - in fact, just yesterday I didn't mention them in my list of big and/or fast-growing European technology companies because I plain forgot.

And yet, in the past year alone, Badoo has managed to increase the number of registered users by 28 percent, the company claims. Driving this growth is a geolocation-based 'hot or not'-style game, dubbed Encounters, which was launched in 2007, one year after the company's founding.

Basically, Encounters allows Badoo users to find people in their local area, with the help of photo, interests and profile info. A 'match' is created when both users like each others’ profiles. 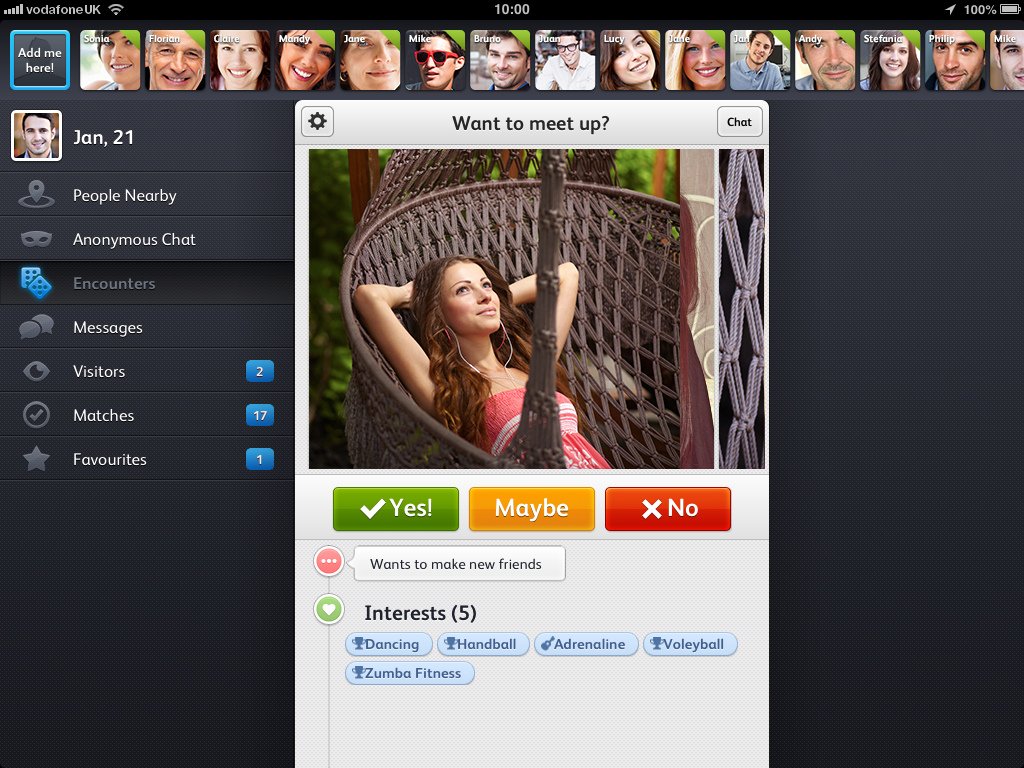 In addition, users can browse and filter people based on location, interests and age. To connect to other users, though, a 'double opt-in' principle applies, which basically means both partners need to express interest before they can start messaging on another.

According to a Badoo spokesperson, more than 560 million Badoo profiles are viewed on a daily basis, resulting in just south of 10 million daily matches. As a direct result, the company has also spawned something of a messaging empire: Badoo users sent roughly 135 million message to each other daily.

Mobile is not just big for Badoo, it's already bigger than the Web for the company. In fact, since last year, mobile usage has jumped by about 63 percent, according to a Badoo PR.

As other major socnets such as Facebook and Twitter have made abundantly clear, mobile is where the majority of revenues will be coming from in the future, so growth in that department is crucial.

Surprisingly, the country with the largest proportion of mobile users is the United States, although Badoo did not break out the number of users for each country. It did say, however, that Brazil tops the chart with the most users overall.

The company also says the average number of sessions per user and day is higher, and the length of each session longer, on mobile than on the Web. The total engagement level is approximately twice as high on mobile as on the Web, Badoo posits.

Here's the real kicker when it comes to mobile, though: according to Badoo, mobile overtook the Web in November 2013 not only in terms of user numbers, but also in revenue.

It helps that Badoo is available on a total of 12 mobile platforms today, including Android, iOS, Windows Phone and HTML5, which makes it installable on almost every smart device. That said, the app is both free and ad-free, which means all the cash it generates is from actually selling premium features to its users.

According to mobile analytics authority App Annie, Badoo is ranked first or second in the social networking category based on gross revenues in fairly big countries such as Brazil, Spain, Italy and France. This is also where most of its sales come from, by the way. 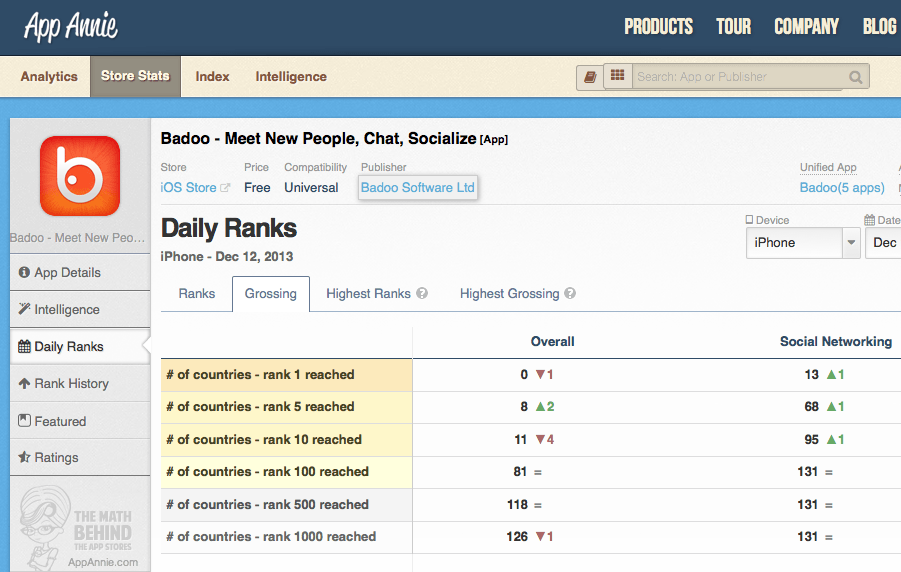 How are we doing in Europe in terms of 'flirtiness'?

Badoo gave me access to a spreadsheet that shows an index of 'flirtiness' among men and women in countries across Europe. Said level of 'flirtiness' is based on the aforementioned Encounters game.

As it turns out, women in places like Norway, Iceland and Bosnia Herzegovina are pretty flirty, or at least keen on meeting new people through services like Badoo, while the opposite is true for women in France, The Netherlands and Belgium.

When it comes to men, the results differ. The flirtiest of males, according to Badoo's findings at least, can be found in countries like Macedonia, Albania and Moldova.

On the other side of the spectrum, we find men living in places like Hungary, Belgium, The Netherlands and Slovakia. Make of it what you will. 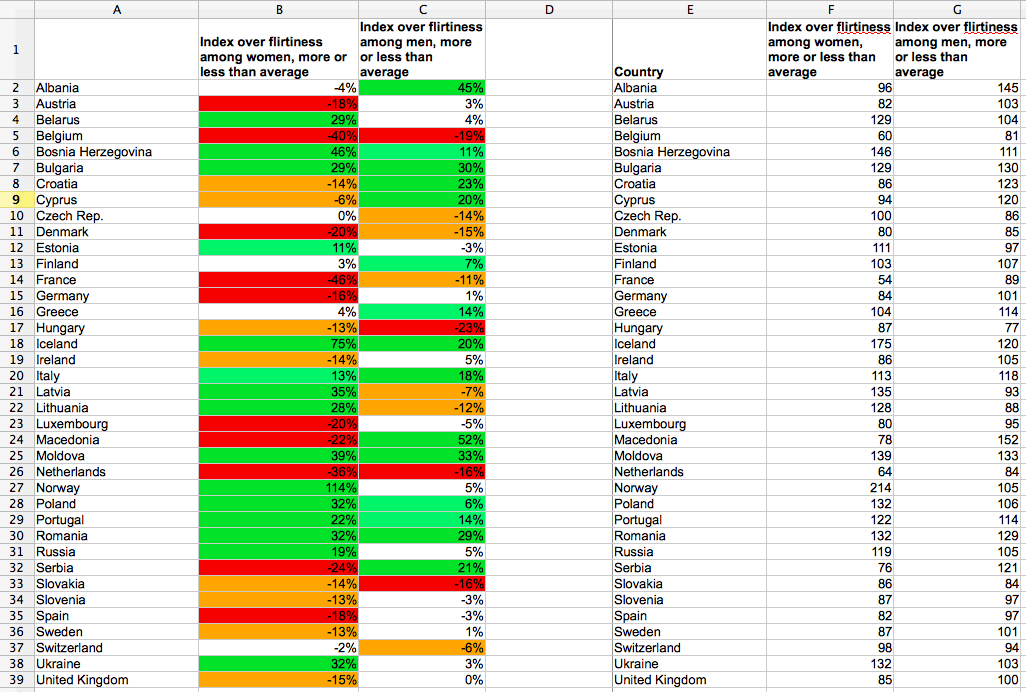 What's next for Badoo? An IPO, perhaps

Badoo currently boasts over 250 employees in its HQ in London and its offices in Moscow and San Francisco, and currently has about 15 open positions.

In a recent interview with Bloomberg, founder Andrey Andreev says revenue has ballooned to $200 million in the last year, and that it has been profitable since 2009.

In addition, the interview reveals that the company recently contracted Goldman Sachs to serve as an adviser, which means the company might be looking to go public next year.

We've independently confirmed that Badoo's annual revenue is in the $200 million range and growing, but no further comment on any IPO plans. Just in case you weren't paying enough attention, Badoo's thus pulling in roughly $800,000 in revenue per employee today. Not bad at all.

We'll be keeping a flirty eye on Badoo to see what comes next.

Badoo by the numbers: 200 million users and $200m in annual revenue on strong mobile usage growth
Comments
Follow the developments in the technology world. What would you like us to deliver to you?
All

NEXT
Really, so the only European tech companies you know are Skype and Spotify? Here's another 120 for you
The other day, I was reminded of how ignorant…
Robin Wauters