Yesterday after market close, NASDAQ-listed Autodesk announced that it has completed the acquisition of Circuits.io, or at least the scrappy Belgian startup's "technology and development team".

Circuits.io has spent the past year and a half or so building an eponymous Web-based app and connected community for designing and simulating electronic circuits, garnering quite a lot of attention when it made its initial public debut in October 2012.

Autodesk and Circuits.io were familiar with each other through a partnership formed in 2013, which resulted in the introduction of Autodesk 123D Circuits last September. Clearly, one thing led to another.

Terms of the acquisition were not disclosed, but I had a chat earlier today with Circuits.io co-founder Benjamin Schrauwen to learn more about the deal and what the future now holds.

Schrauwen wasn't keen on sharing the details of the acquisition agreement, apart from disclosing it was an all-cash transaction and that the team ("pretty much 6 full-time employees") will be relocating to San Francisco later this year as part of the deal.

Schrauwen founded the company with Karel Bruneel, who he acknowledges came up with the original idea in the first place. Bruneel is an electrical engineering post-doc at the University of Ghent, as well as the co-creator of the Arduino-style Dwengo board. He's in the picture below, on the right.

Schrauwen, himself a professor of machine learning and robotics at the University of Ghent, was also the co-founder of Mollom, a spam filtering company that was acquired by Acquia in August 2012. 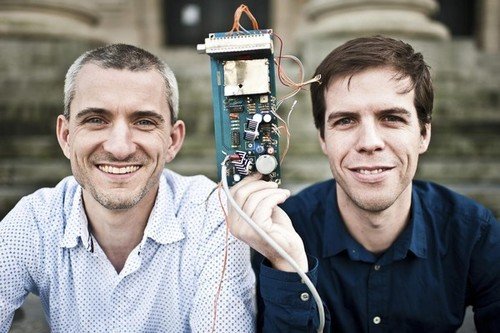 Asked whether he got a great deal for Circuits.io, Schrauwen smiled and said it was definitely an agreement to be happy about. He's required to stay with Autodesk for two years, he adds, but he doesn't know what he'll be up to next, stopping short of saying he'll likely pursue other entrepreneurial endeavors in the future.

As for what's next, Schrauwen explained that Circuits.io will benefit from the scale and resources Autodesk can bring to the party, which will likely result in custom solutions for the education industry and professional hardware manufacturers down the line.

“The rise in affordable, programmable microprocessors like the Arduino, paired with components like sensors and input/output boards, are creating new opportunity for gadget makers and inventors.

Autodesk works with a large and passionate community of electronics-focused users, with over 2000 Instructables leveraging Arduino and circuitry-based projects on Instructables.com. “

We are excited to welcome the Circuits.io team and community to Autodesk, and look forward to developing new tools to help these users unlock their creativity.”

As part of the acquisition, Autodesk plans to migrate all Circuits.io accounts to 123D accounts, and both “Maker” and “Professional” level members will receive 123D Premium membership.

Autodesk acquires open hardware maker community Circuits.io to "bring electronics to the masses"
Comments
Follow the developments in the technology world. What would you like us to deliver to you?
All

NEXT
Breakdown in progress: Fab narrows its European business down to only selling custom-made furniture
Big changes appear to continue to be afoot at…
Robin Wauters