Singing along: Italy's Musixmatch aims to be the ultimate destination for song lyrics on-the-go

Did you know there's an Italian startup out there that caters to 10 million monthly users who look up song lyrics? Charmaine Li puts the spotlight on Musixmatch ahead of a big round of fundraising.
Charmaine Li 05 December 2014
Share
Facebook Twitter Linkedin

American late-night talk show host Jimmy Fallon has started a number of popular Twitter hashtags in the past couple of years. Among those still trending is #MisheardLyrics.

According to a survey of 2,000 adults in the UK conducted by online streaming service Blinkbox Music, almost two-fifths of respondents don’t grasp the words they hear when listening to pop songs.

Earlier this year, I went through a phase of listening to Beyonce’s ‘Drunk in Love’ almost everyday for nearly a month. So, it came as quite a shock when I learned recently that in one line of the song, she actually sings, “We woke up in the kitchen saying ‘How in the hell did this shit happen?’” - And not, “We woke up in the kitchen saying ‘Hi’ to healthy dishes...” as I had originally believed...

Perhaps, I could have avoided misconstruing her lyrics and saved myself some embarrassment had I been using Musixmatch.

When I think of lyrics databases, which isn’t often, images of poorly designed, static websites such like AZ Lyrics or LetsSingIt  come to mind – probably because the last time I remember searching for lyrics was in the 90s.

So it was a pleasant surprise to see an elegantly designed and dynamic platform when visiting Musixmatch for the first time.

Launched in 2010, Musixmatch is a searchable song lyrics database accessible through mobile, web (via Spotify, YouTube or Windows), TV and Google Glass.

Despite remaining relatively low-key since its launch, Musixmatch has garnered more than 30 million downloads, said CEO and founder Massimo Ciociola in a conversation with tech.eu.

The original vision was to create a lyrics catalog on mobile and other connected devices by reaching agreements and securing licenses with notable music publishers. To date, the firm has inked deals with “every major publisher in the world” and more than 8,000 independent ones.

At the moment, its catalog consists of over 9 million song lyrics across 39 languages.

“We called the company Musixmatch because we match your music with lyrics by showing you the words on time with the music,” explained Ciociola. 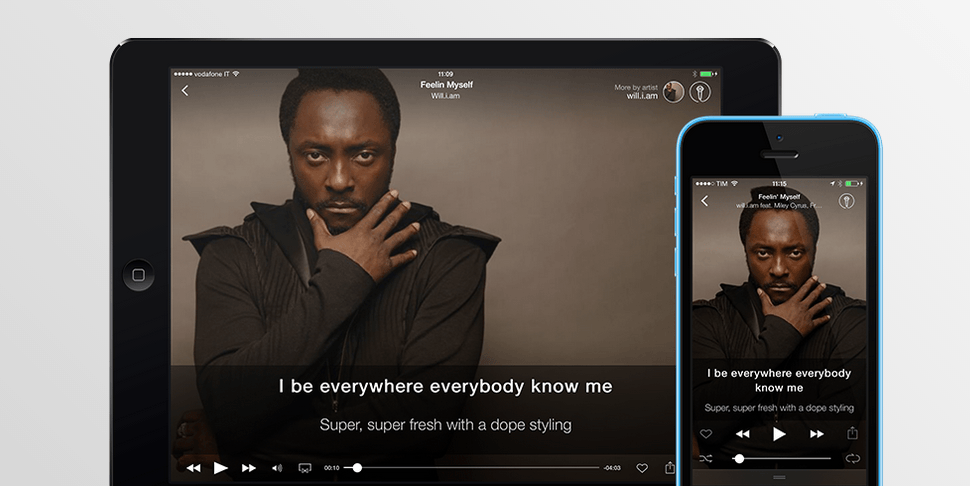 On mobile, the app has the ability to scan through your music files and provide synchronised lyrics while a song is being played simultaneously. I gave it a spin on my iPhone and was a bit disappointed that out of my small library of about 50 songs, Musixmatch could find matching lyrics for only six of them. Although I must say, the experience for those six songs was quite seamless and enjoyable.

These numbers are pretty strong, especially when compared to others in the music industry, such as popular online streaming site Spotify, which saw “over 50 million” active users in the last 30 days.

Having taken a ‘mobile-first’ approach since its launch, Musixmatch recently rolled out a new web platform that lets users contribute, review and discuss lyrics.

Song lyrics are like mythical creatures that people love to search for (on Google), and Ciociola sees this as a big opportunity for Musixmatch.

Now that the user base is growing, what are Musixmatch's plans to monetise?

“During all these years, the main goal was to build a product,” responded Ciociola. “You can’t really build a product and immediately monetise because those two things fight each other. So far, we’ve tried to build a platform, a product which goes on TV, web, mobile... anywhere.” 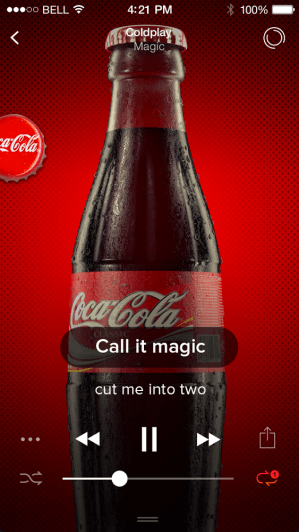 Though I don't completely agree, to that end, he added that since Musixmatch requires the user to look at the screen when using the app, the company has started testing out some native ad formats (an example pictured on right) “which have done pretty well in some countries”.

So instead of an album cover being in the background, there's a – pretty blatant – ad. It's a start, at least...

But, of course, Musixmatch isn’t the only one eyeing down this particular space. There are tons of lyrics websites already out there, such as Metrolyrics, Lyricsmania and Song Lyrics.

One competitor that has been making headlines, though, is Genius, formerly known as Rap Genius, which announced a $40 million Series B round and name-change in July of this year.

Launched in 2009, Rap Genius was originally a site to discuss rap lyrics. Since then, the company been involved in a number of scandals and tried to rebrand itself as a place to “annotate the world” (including literature, news, etc.), as opposed to only rap lyrics.

While Genius is a notable competitor, it's still tackling a slightly different area than Musixmatch, which begs the question: What's next for Musixmatch?

Mapping the future of Musixmatch

Since its founding, Musixmatch has grown to a team of 34 people across its three offices in Bologna, New York and London. The company has raised about $10 million in funding and is currently "working on a much bigger round that could bring Musixmatch to the next stage", said Ciociola.

When asked about the company's future plans, he responded enthusiastically: "TV, TV, TV, TV... In the next few years, besides growing, the TV will play an important role for us."

Not only that, Ciociola said Musixmatch will be setting sights on the Asian markets, where he's been noticing growth in countries such as China, South Korean and Japan. At the moment, most of the Musixmatch's users come from the US, he remarked.

Closing our conversation, Ciociola emphasised the role that Europe has played in the company's journey.

"You can see an important difference in our user experience, especially when comparing Musixmatch to Rap Genius, for example. They don’t manage the content in terms of the languages that we manage. Being based in Europe means having to launch in several languages, while others focusing mainly on the US demographic and market," he said.

"Being in Europe means you can leverage all those different countries and languages, which you can’t really do from the US... Europe has been incredibly important."

Singing along: Italy's Musixmatch aims to be the ultimate destination for song lyrics on-the-go
Comments 2
Follow the developments in the technology world. What would you like us to deliver to you?
All

NEXT
tech.eu M&A report - Q3 2014
In the third quarter of this year, tech.eu tracked a total of 88 exits (acquisitions, IPOs and/or mergers) of European technology companies,…
Robin Wauters