From Tech City to Tech Nation: 74% of digital companies in the UK are based outside of London (report)

According to research by Tech City, two-thirds of 'digital companies' in the UK are based outside of London. Across the UK, the digital sector currently employs about 1.5 million people, the data shows.
Robin Wauters 05 February 2015
Share
Facebook Twitter Linkedin

There's no question that the digital economy in the United Kingdom is in excellent shape and continuedly beefing up, cementing the country clearly at the very top of Europe's 'hottest' tech startup hubs.

Freshly ranked as the most entrepreneurial country in Europe (and fourth in the world), the UK is already home to approximately 400 ICT ‘scale-ups’, according to the most recent Startup Europe Partnership Monitor.

London, in particular, has become a lively starting place for thousands of promising young tech companies, who benefit from being at the epicentre of the European venture capital, accelerator and business angel scene but also at the center of Europe's banking and media industry.

But access to capital is only part of the story: London's ecosystem also thrives on the concentration of major global technology corporations, which often have sizeable offices and operations in the city, government support and plenty of options for (admittedly often pricey) workspace.

But, obviously, the UK is more than just London. A new report dubbed Tech Nation that aims to be the first comprehensive analysis of the digital tech clusters across the UK, proves just that.

Put together by government-backed Tech City UK with the help of more than half a dozen research partners, the analysis shows that the UK’s digital technology industry is growing, but perhaps more notably very diverse in sector and capability across the country.

According to the report, just south of 1.5 million people are currently employed by digital tech companies, or about 7.5 percent of the total UK workforce. Only about 250,000 of those people are employed in Inner London, the data shows.

An analysis of more than 47,000 digital companies in the UK shows that close to two-thirds (74 percent) of those are currently based outside of Inner London. Other so-called 'high-density' clusters identified in the UK include Brighton, Edinburgh and Cambridge, while Liverpool, Bournemouth and South Wales are among the fastest-growing clusters. 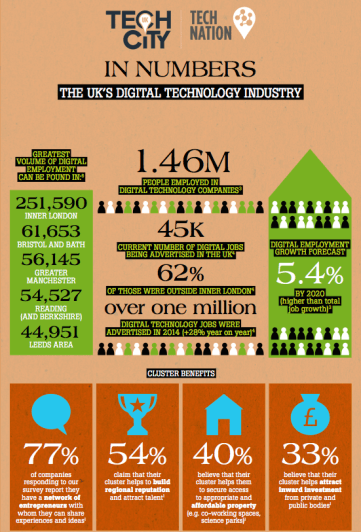 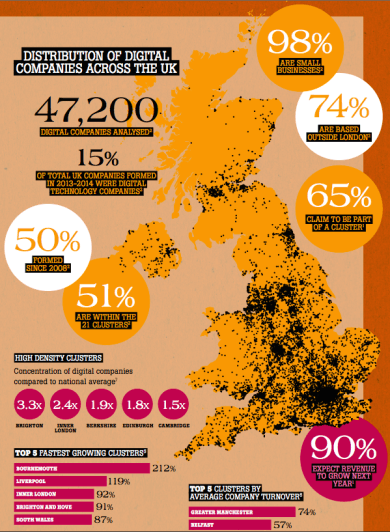 Across the UK, digital technology companies are also growing both in number and size, the analysis demonstrates. To wit, over half of the 47,200 companies analysed were formed since the start of 2008, with 15 percent of them set up in 2013-2014 alone.

The formation rate of new startups is rapidly ballooning, too, with 53 percent more digital technology companies formed in 2013 than in 2010.

Also worth noting: 90 percent of the UK’s digital companies surveyed expect their revenue to rise in 2015 (while 56 percent saw revenues rise in the last year).

According to one of the Tech Nation research partners, job board Adzuna, there are currently 45,000 digital jobs being advertised across the UK, of which about 62 percent were outside Inner London.

Digital job growth is predicted to outperform all other occupation categories by 2020.

"Backing the industries of the future is a key part of our long-term economic plan to support business, create more jobs and build a more resilient economy. The digital economy has become an integral part of our country and the rapid growth of many digital businesses has confirmed Britain’s position as a global hub of technology excellence.

We are committed to supporting the growth of our digital industry nationwide and Tech Nation shows the great innovation and thriving entrepreneurial spirit that is driving the sector forward across the country."

But not everyone is a fan. London-based early-stage tech investor Hussein Kanji, tweets:

Latest agitprop from UK. Wonder how accurate this research is, or if its designed to conclude what they want http://t.co/AAUyTZQ0SP

.@Ronin_Jim Just finished reading this. I don't get the point of this report. London has 250k "digital" jobs. Other regions are tiny.

Make up your own mind. The research is available in the form of an interactive guide thanks to another 'core project partner', DueDil. You can also access and download the PDF directly here.

From Tech City to Tech Nation: 74% of digital companies in the UK are based outside of London (report)
Comments
Follow the developments in the technology world. What would you like us to deliver to you?
All

NEXT
Photo essay of the Lift Conference: A peek into Swiss tech and startups from emerging markets
From an elaborate tech installation that…
Charmaine Li