Is Europe really betting on Bitcoin?

After the collapse of the Bitcoin price in summer 2014, we took a look at the state of the European Bitcoin startup ecosystem to see whether there's still money being invested into these companies.
Alex Barrera 02 March 2015
Share
Facebook Twitter Linkedin

One of the things that struck me after I moderated a panel at the How To Web conference on the Bitcoin economy last year was the amount of questions we got from the audience related to Bitcoin price and its use as a speculative vehicle.

Bitcoin is often portrayed as the poster child of high volatility currency assets. Until last summer that was, to some degree, true. While there are several drivers that affect the Bitcoin price, speculation and media attention are two of the most important without a doubt.

Since June 2014 though, the price has been on a downtrend and now seems to be stablising around the $200 mark. Apart from the collapse of several big trading houses, the decrease in media attention has also favoured the stabilization of the crypto currency. 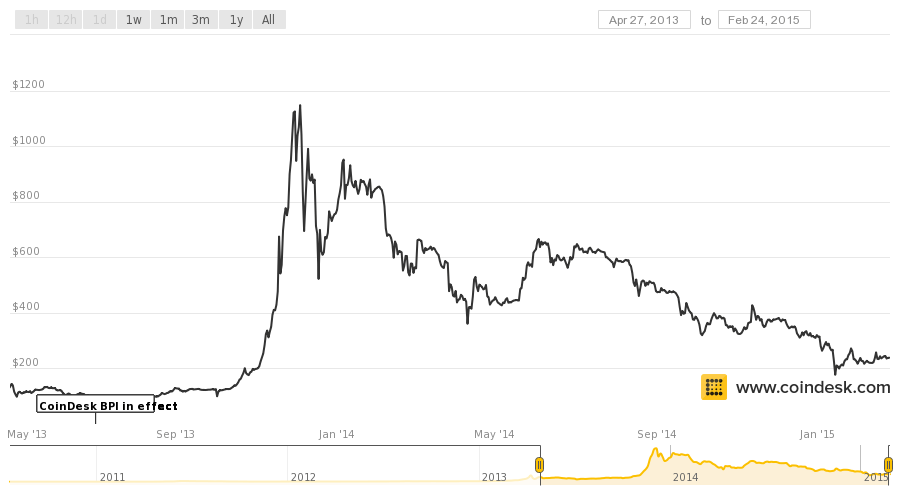 Despite all this, investors seem to be even more interested in Bitcoin, or rather Bitcoin-related startups than ever before. To assess this, we took a quick look at the numbers from our friends at CoinDesk, who have created a spreadsheet with a number of investment operations they've been tracking since 2012.

We decided to crunch some numbers and get some insight on how well Europe is doing in terms of Bitcoin investments. Keep in mind this data isn't all-encompassing and is missing minor operations, such as Coinffeine's recent round, and some others across Europe, but is still worth taking a look at.

As shown above, the difference between North America and other regions is quite staggering. Europe is the third largest region by number of operations, behind Asia. However, if we map the deals by volume, Europe stands out with a pretty decent volume of investment per deal:

While investment in North American Bitcoin startups are still way ahead of the rest of the world, Europe is catching up and has already surpassed the number of deals from Asia in 2015, which is good news. ALSO READ: A Guide to Bitcoin (Part I): A look under the hood It seems investors are finally seeing the potential of Bitcoin beyond its currency value and are investing on startups that are increasingly using the Bitcoin's Blockchain to build innovative products that go beyond obvious financial uses.

Finally, as seen above, mining is still getting most of the euros followed, unsurprisingly, by the 'wallet industry'. Eventually, it's likely we'll see a shift in pattern and new types of Bitcoin startups will start emerging as well as receiving more investment.

Overall, Europe isn't sticking out as a driving force in the Bitcoin investment community, but it isn't ignoring it either. The trends indicate an increasing momentum in the space and, hopefully, we'll start seeing more and more European startups emerging in this space.

ALSO READ: A Guide to Bitcoin (Part I): A look under the hood

Update: As requested in the comments, I've also added, for comparison's sake, the same chart but for the North America investment deals.

Is Europe really betting on Bitcoin?
Comments 4
Follow the developments in the technology world. What would you like us to deliver to you?
All

NEXT
Startup Spotlight: Q&A with Marko Guček, founder and CEO of shuttle transport booking startup GoOpti
Aside from shining a light on some of Europe's…
Robin Wauters