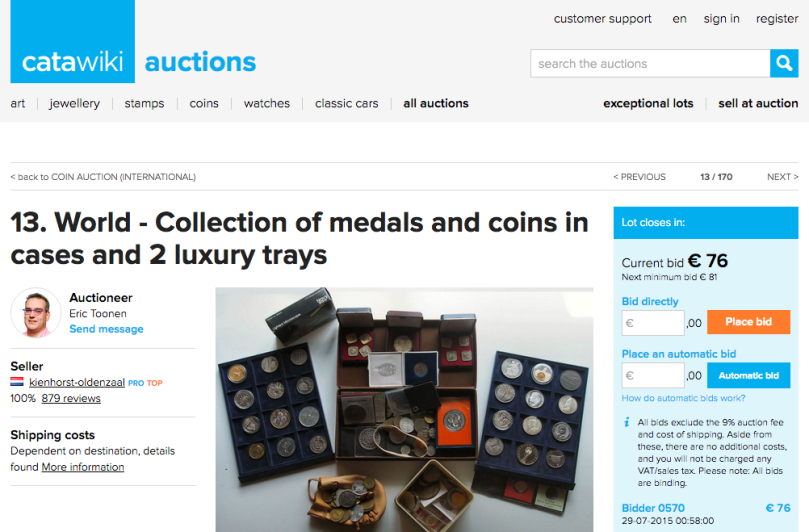 Amsterdam-based Catawiki, Europe’s fastest-growing online auction house for unique objects, has closed a $82 million Series C round of financing from international investors to support its growth.

Founded in 2008 by René Schoenmakers (CEO) and Marco Jansen (CTO), Catawiki was originally conceived as a community for collectors to buy and sell collectibles such as comic books and stamps, but it has since expanded to over 60 different categories and has grown into the premier online destination in Europe for trading special items, including art, watches and jewellery.

Lead investor in Catawiki's round is New York-based Lead Edge Capital, which has a track record in backing European high-growth companies - it also holds stakes in Delivery Hero and BlaBlaCar.

Prior backers Accel Partners and Berlin-based Project A Ventures also participated in the round, as did several former Booking.com executives, including ex-CMO Arthur Kosten.

The Series C investment, which is one of the largest funding rounds ever in a Dutch Internet company, follows rather impressive growth since the company’s €10 million Series B investment in 2014. Over the last 12 months, Catawiki says it has increased revenues by 300% and doubled its number of auction categories, selling over 15,000 lots per week. It has also launched in Italy, Spain and the UK.

The company already employs some 200 people in five countries but says is actively hiring for "hundreds of positions" now that their big funding round is closed.

**Also read:** These were the 20 biggest funding rounds in European tech in the first half of 2015

European online auction house Catawiki raises $82 million in Series C funding to spur growth
Comments
Follow the developments in the technology world. What would you like us to deliver to you?
All