As we’ve mentioned several times over the past few months, 2015 is poised to be a record year for the Spanish startup ecosystem. And now we have data to back up this claim.

According to data compiled by Novobrief, startups in Spain raised €409 million in the first three quarters of 2015, almost doubling (+83%) the amount raised in the same period a year ago (€223 million). When October is also taken into account, investment activity reaches €460 million, thus surpassing the $0.5 billion barrier for the first time ever.

These figures vastly exceed the capital that was deployed in both previous full years, 2013 and 2012, when €285 and €221 million were invested in local technology companies, respectively. The analysis does not include investments in biotech and pharma startups.

This significant increase in funding has a lot to do with two main circumstances. What we like to describe as the second coming of classifieds and mobile marketplaces, led by Wallapop, and the fast growth achieved by a number of startups that were founded at the beginning of the decade that have now expanded globally.

If eBay, Craigslist, Schibsted or OLX are the poster children of a wave of startups that disrupted the classifieds industry in the previous decade, Wallapop, Letgo and a handful of other competitors are trying to do the same with a mobile first approach.

What is relevant is that two of the most well-funded startups are both based in Barcelona and both have built significant war chests over the past few months.

As we first broke earlier this year, in Q1 Wallapop raised a $40 million round led by Insight Venture Partners and Accel Partners. TechCrunch later reported that in Q2 the company led by Agustín Gómez had gone fundraising again, to the tune of $100 million from Fidelity.

Wallapop never confirmed the funding and Fidelity did so without specifying its size, but we’ve now confirmed with numerous sources that the deal did indeed happen and came in between $75 to $100 million.

Wallapop’s Series C round included the participation of Accel, Insight Venture Partners and also two Nordics-based funds that had not yet been associated to the Barcelona company: Vostok New Ventures and Northzone VC. As a publicly listed fund, Vostok has to disclose vast information associated to its investments, and in its two latest filings, Vostok says that it has invested about $5 million in Wallapop and currently owns 12,575 shares in the company.

One of Wallapop’s closest and global competitors -both companies are focused on conquering the US market- is also headquartered in Barcelona. Many did not have Letgo in their radar until the company announced a $100 million investment from Naspers in September, but they sure do now. Letgo’s investment is so far the second biggest of 2015. 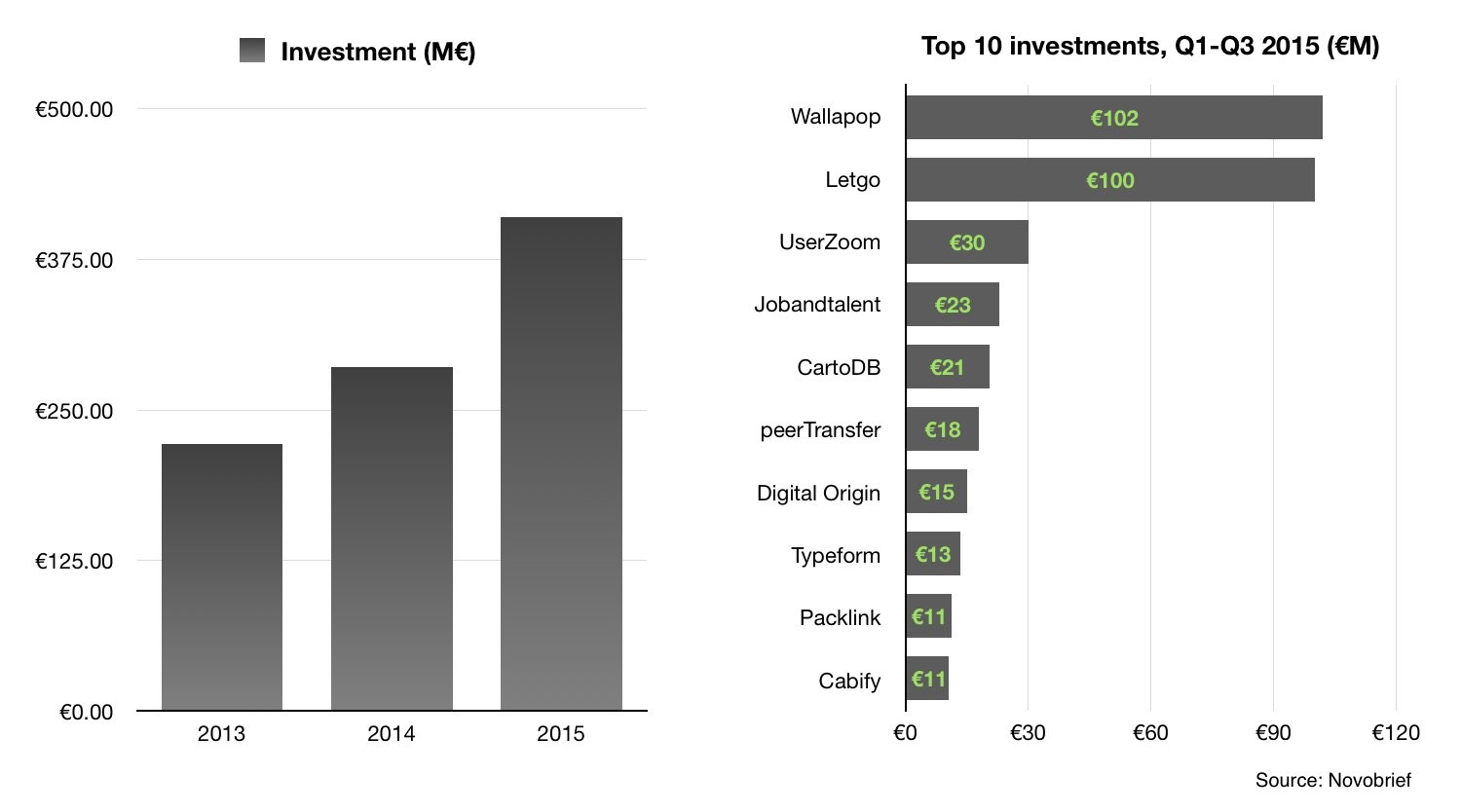 If these two companies represent the up-and-coming classifieds disruptors, a selected group of others epitomise what steady and balanced growth represents. UserZoom raised €30 million after being in business since 2007, Jobandtalent was founded in 2009, CartoDB and peerTransfer in 2009, and Typeform in 2011.

Capital is here and available. Exits are the next big step

Many in the industry have often claimed that one of the main weaknesses of the Spanish startup scene was the lack of funding at all stages. That no longer seems to be true at the early stage (seed and Series A), as the ecosystem of Venture Capital firms, business angels and accelerators has significantly increased over the past few years.

As FJME’s Pablo Ventura recently wrote, the Spanish VC industry has gone from an oligarchy controlled by a handful of firms to a democracy in just five years.

Growth capital is a totally different story, and startups that reach those stages are often forced to look for money it abroad. In fact, 9 of the 10 biggest rounds of 2015 have been led by international VC firms. Jobandtalent is the exception.

Two things to mention before everyone gets too excited: Spain is still behind countries like France, Germany, UK or Israel in terms of venture investment (see slide #11 of Gil Dibner’s deck) and what ends up moving the needle are not investments, but exits. And history tells us that very few have surpassed the €100 million barrier in Spain in recent years.

Hopefully that will also come to an end soon.

Facts and figures: the Spanish startup ecosystem in the first half of 2015

It’s not just the weather: Southern Europe’s startup ecosystem is heating up

A look at the state of entrepreneurship in Spain, Southern Europe and Latin America

Investment in Spanish startups to surpass $500 million in 2015 (for the first time ever)
Comments
Follow the developments in the technology world. What would you like us to deliver to you?
All

NEXT
Getting the most out of OSCON: what not to miss
Editor’s note: This is a sponsored article, which means it’s independently written by our…
Jonathan Keane