The Turkish startup ecosystem in Q3 2015: an analysis of funding, M&A transactions and trends

Turkey's hot topic early in the summer was the elections. Following the elections and the break up of the coalition talks, Turkish Lira plunged to new record lows against the US dollar. One might think that this swing in the FX rates would make investing in Turkish startups more attractive from a valuation perspective, but investors chose to wait out the next steps on the political front while maintaining their interest in the market with a cautious outlook.

Out of 62 new startups that were founded in Turkey, SaaS businesses led Q3 with the highest number of interest. More and more SaaS solutions are being brought to the market every quarter.

After the E-commerce and Group Buying wave in 2011, the Turkish startup ecosystem has been generating more SaaS, Gaming and Mobile business traction.

One of the fastest growing SaaS solution providers in Turkey is HotelRunner with a YOY client growth rate of 124% in the first nine months of 2015. SaaS companies with a focus on translation, HR and marketing automation solutions are on the rise in Turkey as well.

There were ten funding rounds in Q3 totalling $4.7 million, $3.7 million of which came from VCs. There is no dominant vertical in funding rounds but we've started to see some cleantech investments in Turkey. That's one of the interesting trends in recent months. Zaxe is the first funded 3D printer provider in Turkey. This is also a good sign for 3D printing businesses. 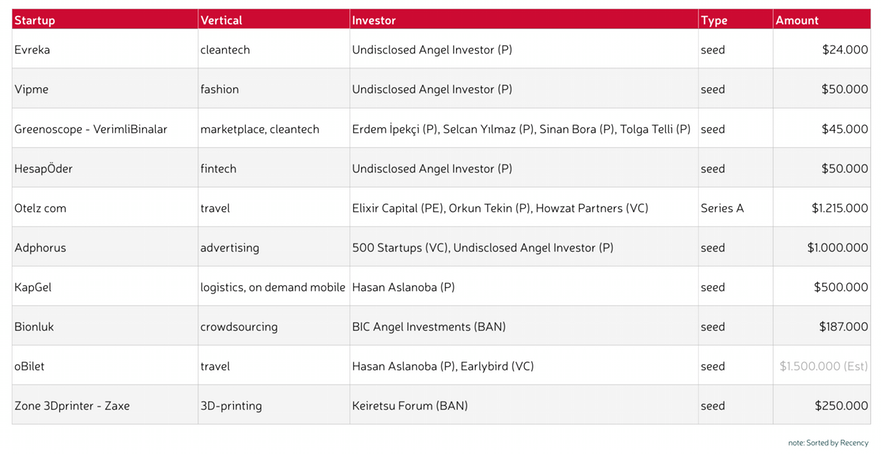 Compared to last year, the number of rounds remained the same but the investment deployed decreased more than 30%. Government grants are the first choice of Turkish entrepreneurs seeking seed funding. That may have affected the total amount of investments.

When we compare the VC backed funding amount to other European contries, Turkey is just above Latvia and Estonia. According to Gil Dibner's (VC) report, Turkey is ranked 18th in 20 European countries.

There were only two acquisitions in Q3. One is because of the end of an earn-out period. The other one is a fashion discovery and social networking site similar to Polyvore.

One of the negative signs in Q3 was the closure of Groupon's Turkey operation. Good signs: a new tech accelerator fund, ACT, was launched, TRPE has started to manage the Netas Wesley Clover Technology Fund and the number of accredited angel investors has reached 323.

One of the key highlights in Q3 was the emergence of on-demand mobile businesses. We've started to see some Uber for X startups, same-day delivery services etc.

In the content business, Onedio (the 'Buzzfeed of Turkey') has expanded its operations to the Russian market. One of the competitors of Onedio, Listelist, has booked 300% revenue growth compared to the previous quarter.

Iyzico (the 'Stripe of Turkey') also has a good traction in Q3. Their revenue growth is 300% compared to previous quarter.

To summarise, there are good developments in the right direction in the market but Turkey needs more global startups that are less affected by domestic economical and political unstabilities. Some mobile game startups shown the path to be global, the rest should follow the same path in the near future.

The Turkish startup ecosystem in Q3 2015: an analysis of funding, M&A transactions and trends
Comments
Follow the developments in the technology world. What would you like us to deliver to you?
All