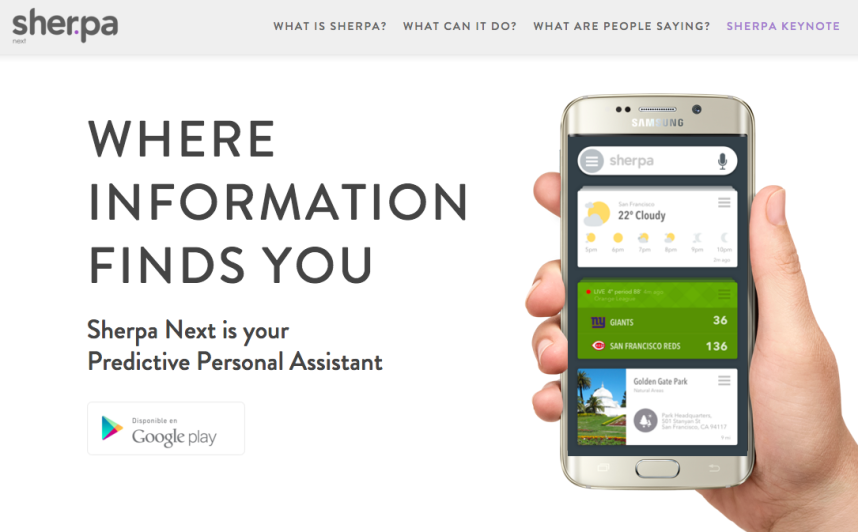 Sherpa, the Bilbao-based maker of a virtual personal assistant, is today debuting its new app (dubbed 'Sherpa Next') for iPhone. The company managed to convince Apple co-founder Steve 'Woz' Wozniak to join the startup's launch event (though, from what we gather, by video-conference only).

Other luminaries attending the Sherpa Keynote event are Celestino García, Vice President of Samsung, and Bernardo Hernández, the former Director of Marketing at Google.

Xabi Uribe-Etxebarria, the CEO and founder of Sherpa, announced that the company is venturing into the world of wearables, introducing an app-in-development for Samsung's Gear S2, the South Korean electronics giant's latest smartwatch.

“We have reinvented how information is consumed on mobile devices and are very excited about this new period that starts today, as we dive into the world of wearables. Since launching Sherpa's first beta, a lot of people have asked me when the iOS version would arrive, so after a lot of work, today, we can announce the new version and could not find a better way of doing it than in the presence of Apple Co-Founder Steve Wozniak," Uribe-Etxebarria commented.

Sherpa competes directly with Apple's Siri, Google Now, Microsoft's Cortana, Facebook M and scores of startups building personal assistant apps for smartphones, including Assistant.ai, Indigo, EasilyDo, 24me, Robin and GoButler just to name a few. Here's what it can do.

Apple co-founder Steve Wozniak helps Basque startup Sherpa launch its 'Next' app for iPhone today
Comments
Follow the developments in the technology world. What would you like us to deliver to you?
All