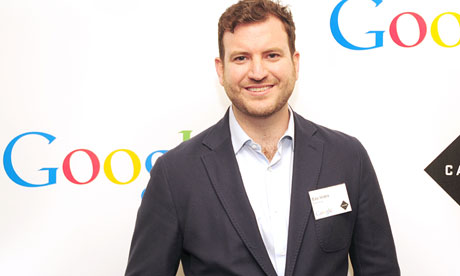 Mere weeks after Google discontinued its dedicated investment arm in and for Europe, Eze Vidra has quit his position as investment partner in Google Ventures - and the company altogether.

Vidra, who launched Google Shopping in Spain and other commerce products in a number of European markets, and established the successful (and first) Google Campus in London during the 5.5 years he worked at Google, is leaving at the end of this year.

In a farewell blog post published on Christmas Day, Vidra did not reveal anything about what he's up to next, vaguely saying he will 'continue to work with startups'. From the sound of it, figuratively speaking, it appears he will be moving out of London with his family shortly.

Vidra helped set up Google Ventures (now simply 'GV') in Europe and led its $60 million investment in music publishing and rights firm Kobalt. According to a recent report in the FT - and by Business Insider earlier this year - there was a lot of tension and frustration in the 'Google Ventures Europe' team about the inner workings of the corporate venture capital firm.

In fact, Eze Vidra is the second from an initial four investment partners Google Ventures had in Europe to depart; last Summer, another partner - Peter Read - walked away without explaining why.

Meanwhile, Vidra's profile on the GV website has already been erased.

Google Ventures loses another investment partner in Europe as Eze Vidra departs the company
Comments
Follow the developments in the technology world. What would you like us to deliver to you?
All