In a new, combined tech.eu report, we break down and analyse in-depth all of the European tech exit and funding deals we tracked and vetted during Q2 2017.
Robin Wauters 25 July 2017
Share
Facebook Twitter Linkedin

Our latest European Tech Funding and Exits Report shows that a high proportion of later-stage rounds made Q2 2017 the best quarter on record for European tech funding.

Our newly released European Tech Funding and Exits Report dives deep into these numbers.  It's the second time we are releasing one combined report that looks both at funding and exit figures in one comprehensive analysis.

The report is the culmination of our ongoing monitoring of 150+ news sources across Europe in 12+ languages - including Israel, Russia, the Balkans, Norway, Switzerland, Turkey and other countries we consider part of the European technology industry. These deals are also outlined on a weekly basis in our newsletter.

This is our fourth year producing in-depth reports, and each has proved to be a very valuable resource for corporates, VC and M&A firms, and other prominent actors in Europe’s ecosystem. 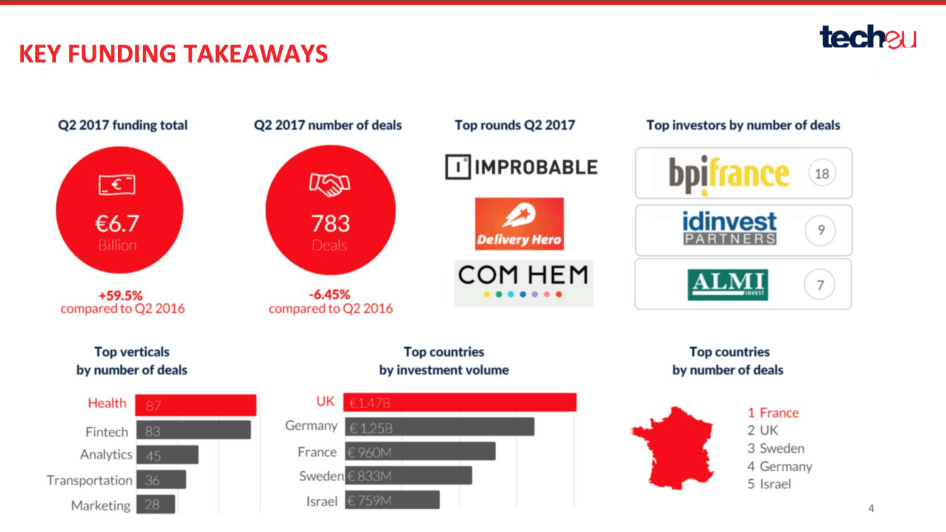 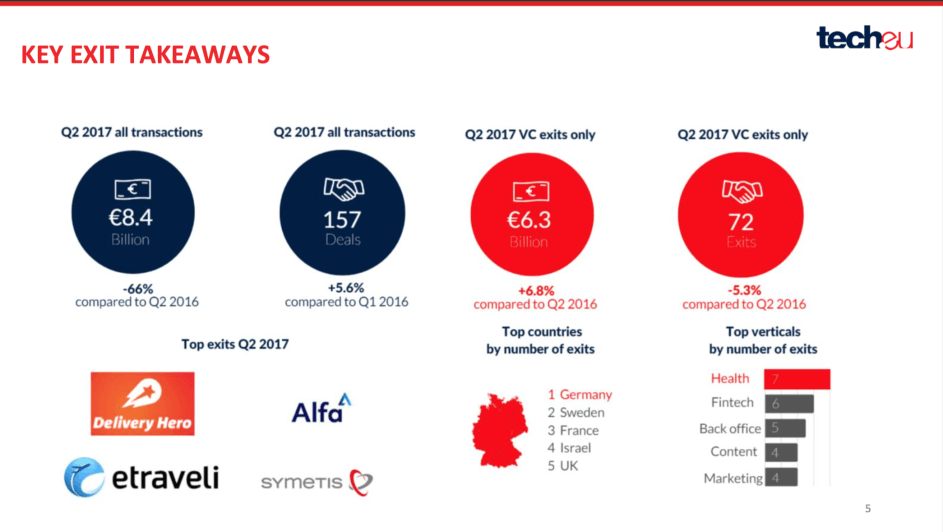 This is just a small taste of our comprehensive report into Europe's exit and funding scene, so what else can you expect?

- breakdowns of funding rounds tracked by tech.eu during the quarter analysed by stage, country, quarter, vertical, and size – breakdowns of exits (M&A transactions + IPOs) tracked by tech.eu during the quarter, analysed by type, size, vertical, acquirers, and country - analysis of the top funding rounds and exits in Q2 2017 - an overview and analysis of the most active investors in European tech companies, both in terms of funding and exit activity - a detailed analysis of the UK, Germany, Sweden, France, Israel, and Spain – a look at the total and average size for all disclosed exit and funding deals – insights into how many of the exited companies were backed by venture capital – insights into where and when most M&A activity in Europe took place – insights into where buyers of European tech companies were located – a closer look at some of the largest markets in Europe, and some notable exits

For a deep-dive into the above and our accompanying analysis, you can purchase the full report here for just £125. Any questions? Please use our contact form.

A solid start of the year: tech.eu releases Funding and Exits Report for Q1 2017

Record-breaking: tech.eu releases European Tech Funding and Exits Report for Q2 2017
Comments
Follow the developments in the technology world. What would you like us to deliver to you?
All