Tech.eu Insights creates insight and guides strategies with its comprehensive content and reports. Browse popular Insights content.
Examine the effects of the latest technology with the Tech.eu lens, see the details and create powerful strategies. Take immediate action to access exclusive articles and reports.
Review Advantageous Packages
Does your company have Insights access? Check it
Features/Profiles
Sponsored by EASME

EIC Innovators’ Summit in Berlin: No half-baked ideas on the Innovation Kitchen

Editor’s note: This is a sponsored article, which means it’s independently written by our editorial team but financially supported by another organisation, in this case, EASME. If you would like to learn more about sponsored posts on tech.eu, read this and contact us if you’re interested in partnering with us.

The European startup ecosystem is maturing rapidly, and so is the governmental support system built by the European Commission. Some of the progress made across the region was shown at the European Innovation Council (EIC) Innovators' Summit in Berlin last month, where almost a thousand entrepreneurs, investors, and corporates came together to share knowledge, make connections, and collaborate.

Spread over two event-packed days at the industrial-looking Station Berlin, the conference also offered a first glimpse at the future of the European Commission's effort towards improving the entrepreneurial landscape in the region. As part of this, Jean-David Malo, Director of Open Innovation and Open Science at the EC, outlined a new proposal that would see the program SME Instrument Phase 2 introduce equity-based investments alongside the traditional grant programme.

The idea was perceived positively by the startups we talked to. It seemed like most entrepreneurs who came to Berlin were the ones who received the so-called Phase 1 grant of €50,000, successfully developed an early-stage product, and now looking for a larger cash injection from the EIC pilot. In order to support these entrepreneurs, the Executive Agency for Small and Medium Enterprises (EASME) unveiled a new online platform where successful applicants, mentors, and the EC staff can collaborate and get support.

Also speaking on the main stage were representatives of larger companies and institutions that shared their vision and advice with the aspiring founders. Among other, the Chief People Officer at Innogy Innovation Hub Annemie Ress, VP at EIB Ambroise Fayolle, and Senior Vice President of the Global Listing Services and head of European Listings at NASDAQ Adam Kostyál took the stage over the course of the event. 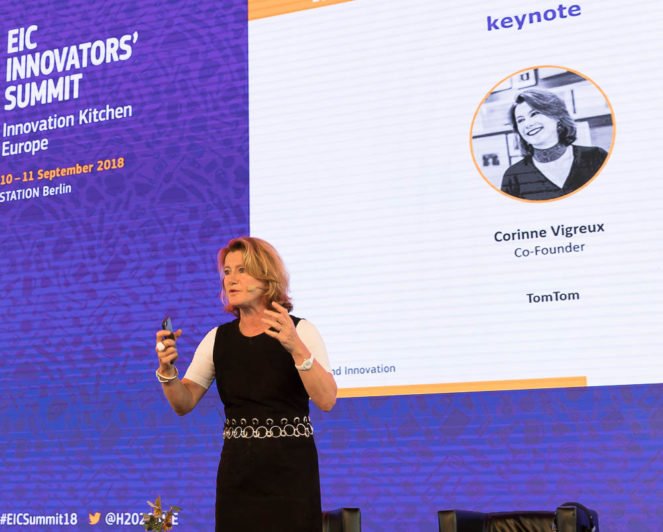 On the corporate side, the co-founder of TomTom Corinne Vigreux talked about Europe's ability to catch up with the US in terms of the entrepreneurial ecosystem development. (Check out longer interviews with Corinne Vigreux and EASME's Julien Guerrier on our podcast.)

“Europe used to rule the world in terms of technology innovation,” she said. “We invented GSM, we had some of the biggest phone manufacturers in the world… It's time for Europe to show its strength and build technology giants. The EIC pilot can identify those companies in certain areas, help them scale, and connect academia with the entrepreneurs with bright ideas.”

Alluding to the Innovation Kitchen theme of the summit, Vigreux added that “Europe needs to be not on the menu but at the table in the technology sphere.”

Territorially speaking, most of the space at the event was allocated for workshops, meetings, and stands where startups and larger companies that received funding from the EIC pilot. More than 30 workshops held during the summit focused on a wide range of topics relevant for startup founders and early employees, from communications to HR to fundraising. The futuristic-looking inflatable workshop pavilions were often full of participants sitting and standing around the tables and brainstorming together.

In one of the climactic points of the event, the startup pitching competition finals started towards the end of the second day. After a series of elimination rounds, eight founders came up on the main stage to pitch their projects and get a chance to become the number one. 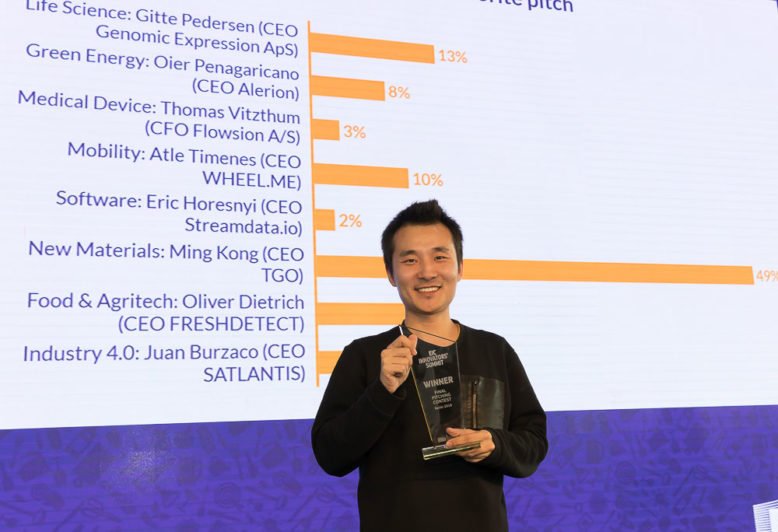 The public vote had clearly shown the winner, UK-based TG0 that secured Phase 1 funding from the EIC pilot in the past and competed in the New Materials track. As the CEO Ming Kong explained, the company produces a material that has not electronic sensors built in but is sensitive to touch, press, and other interactions. It could be used in a wide variety of sectors, including automotive interiors, consumer electronics, gaming consoles, and so on.

“Everybody is super approachable,” Kong said after the competition was over. “Just this afternoon alone I talked to more than 10 people, accumulated a bunch of business cards. I think that's the spirit — it doesn't matter which sector you're from, everybody is very open for a conversation. I'll definitely come back next time.”

EIC Innovators’ Summit in Berlin: No half-baked ideas on the Innovation Kitchen
Comments
Follow the developments in the technology world. What would you like us to deliver to you?
All