Musing on Medtech in the Mediterranean

tech.eu was recently at the Reflect Festival, held in beautiful Cyprus. the motto was "Where the history of the future will be shared". The speakers included the first Android citizen Sophia, who, unfortunately, I didn't have time to interview.

The poet Max Stossel ended the two days with poems about our lives with technology and how breakups are extra painful with social media, there to remind us and celebrate "anniversaries" of great days we'd had.

Giving us a strange and painful dose of endorphins. Broken hearts in a broken medium.

This leads me nicely to the panel we moderated on Medical Technology where start-ups are trying to fix our physical hearts.

Medical technology is big business in Europe and if we take into account of 12,000 patents filed in 2016, there's significant innovation too. But mostly it's worth a lot in monetary terms; "Europe has a positive medical technology trade balance of €17.5 billion (2016) and this represents a more than twofold increase since 2006." (Source: Medtech Europe - PDF)

Initially, Hicham Shatou (LeQuest), Yosef Harb (Happitech), and Tomas Brngal (Virtual Medicine) explained the progress of their own businesses around improving the use of medical technology, heart health, and VR. 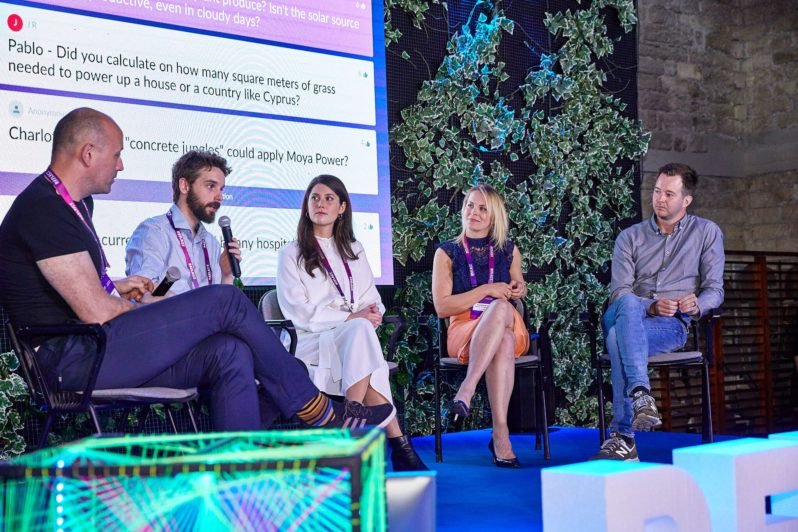 Hicham's entrepreneurial story started with sports technology, quickly cooling down athletes; this morphed into medical technology when it was seen that this would have benefits for chemo patients. But now he's moved to building programs that help doctors and others get on-boarded more quickly to their hospital technology with simulation and certification. It feels like the very definition of a "painkiller" application. Given that some very expensive machinery has written notes like "if the red button is flashing, don't press it" there is potential for progress. They are active in 15 countries and have over 40 employees.

Yosef's Happitech is using smartphone technology to detect nuances in our heart rhythms but is a real advance on existing apps that just check for a pulse. Their technology is "actual" medical technology because it identifies heart rhythm disorders including the often undiagnosed Arrhythmia i.e. it does more than your Fitbit.

Tomas received his medical degree at the Faculty of Medicine of Comenius University. With Miloš Svrček, he co-founded Virtual Medicine, which has developed for a VR application called Human Anatomy VR. This medical educational app is designed for students of medicine and doctors, working on the principle of virtual reality.

Questions from the audience circled around the adoption of these technologies. I was interested in how they build their businesses in a regulated environment, "with difficulty" it would appear.

Hicham even suggested that we could look to how the US adopts new technology and processes - championing how the US does healthcare is not something we hear that often. But it appears the biggest issue in the EU may be that hospitals are not rewarded for more efficiency, rather they may lose money if people are discharged more quickly.

My final impression was that this is an industry Europe shouldn't just be competitive in, it's one we could dominate. The talent is there, and we have the patients - and they are happily getting older...

ICYMI: Throughout May, tech.eu is focused on surfacing interesting stories, startups and people from the health/medtech industry, powered by Bayer G4A.

Musing on Medtech in the Mediterranean
Comments
Follow the developments in the technology world. What would you like us to deliver to you?
All

NEXT
UK-Israeli startup Ravin raises $4 million to apply AI to vehicle inspections
Ravin.AI, a startup based in Haifa and London, has landed a $4 million funding round led by…
Andrii Degeler