Insurtech in Europe: 2020 in review

Interestingly, COVID-19 had little to do with the drop in funding. The lack of German megarounds from 2019 was the main cause of the shrink of insurtech in Germany (€460m to €95m). The growth in other European countries didn’t manage to fill the gap.

Certainly, the numbers could have been better if covid-19 didn’t impact the VC/ startups space with 3 combined trends: (i) several startups didn’t manage to raise money due to poor KPI and/or shift among VCs from doing new deals into focusing on portfolio companies, (ii) others waited for a better market timing before kicking-off a new fundraising round, (iii) a few raised money but didn’t announce the round yet, waiting for a quiet moment to get more visibility.

To help you get a comprehensive view of the European insurtech scene, we are happy to provide you with further details on deals done in 2020. Based on astorya.io's market watch tool, every deal announced was spotted and analyzed, to build this report. You will find usual KPIs by size and countries, and a business-oriented analysis alongside the insurance value chain. 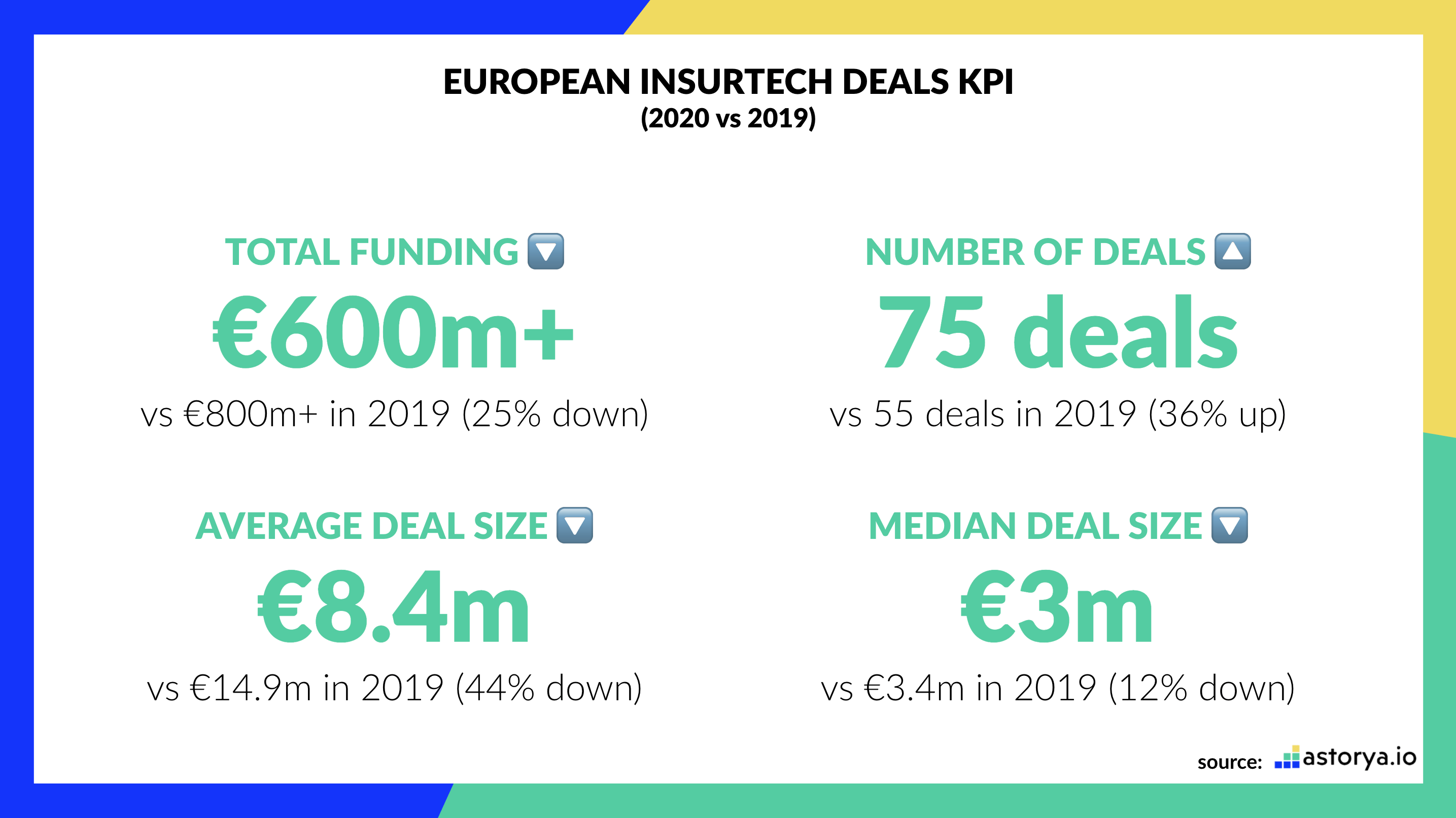 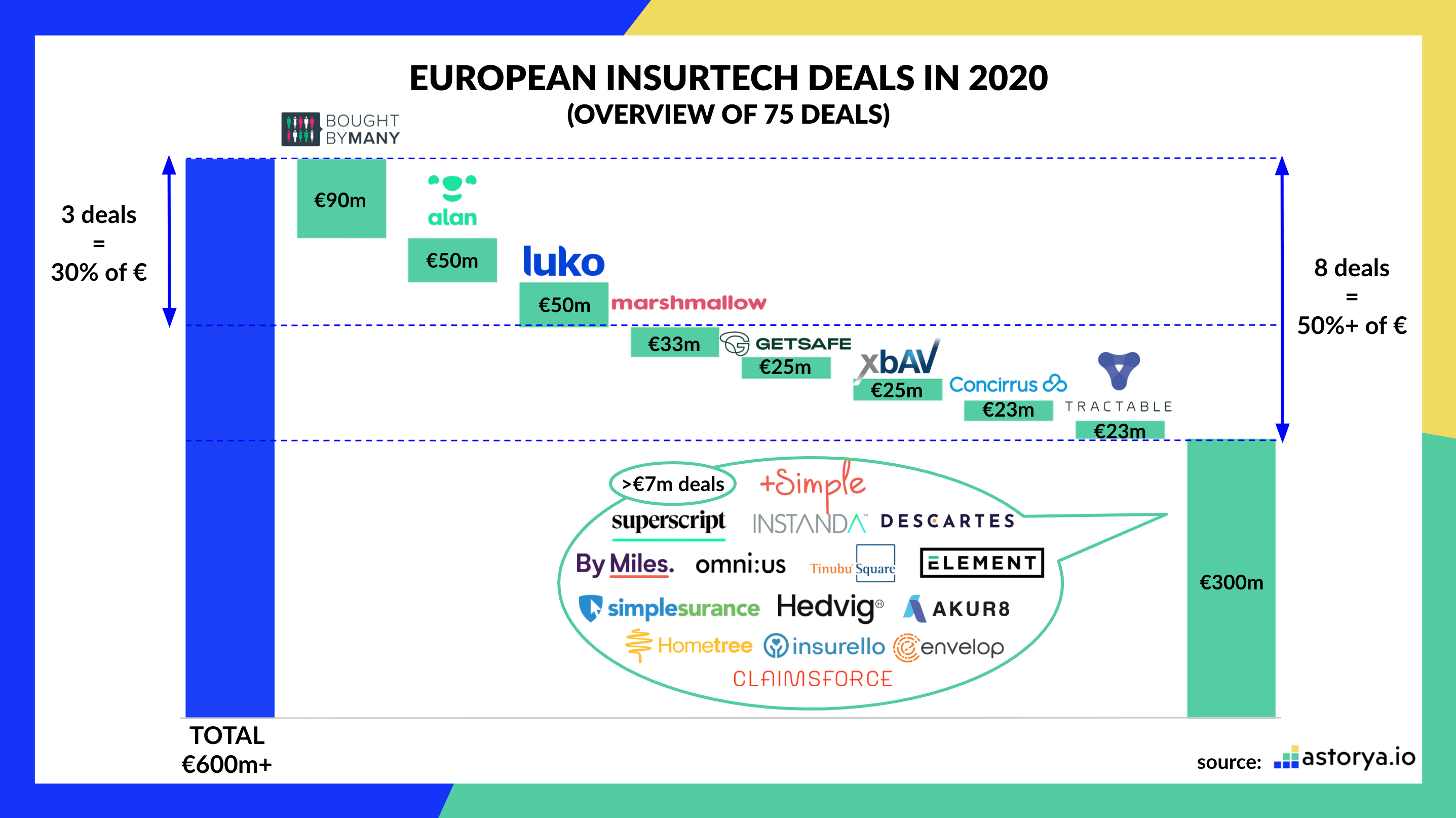 Interesting to see Alan and Luko both raising 50m€ and both reaching 100k customers in 2020. We shouldn’t forget though that they have two different business models. Alan is a licensed insurance company, therefore a risk carrier and it’s business model is based on underwriting profitability. Luko is an insurance MGA (agent) selling policies of an established carrier, hence its revenues are commissions on policies sold. 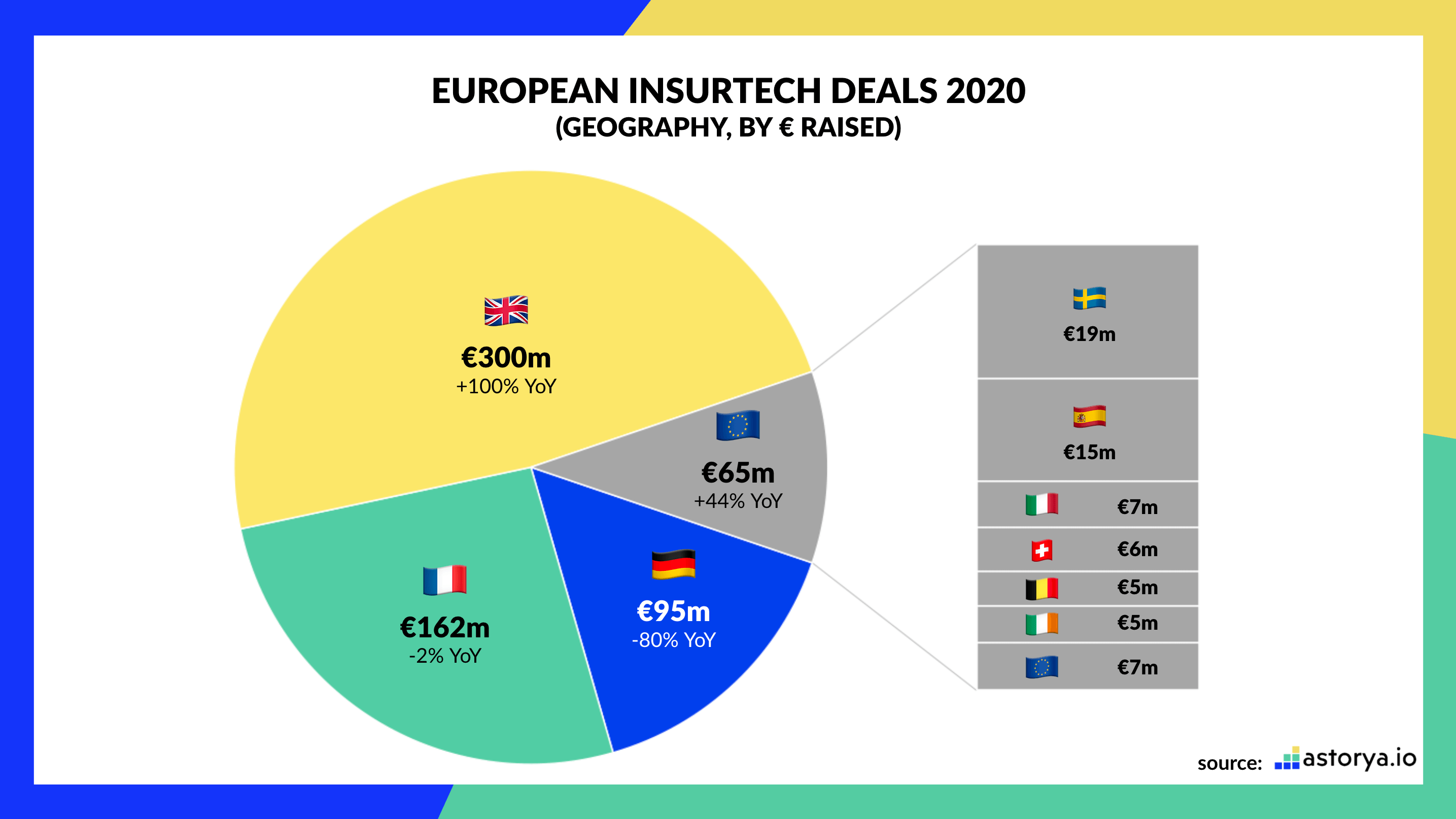 Although Germany has a few well established insurtechs, its entire ecosystem seems limited and undiversified (9 deals in 2019, 8 in 2020) compared to the UK (21, 29) and France (14, 17). What causes this conservatism in insurtech investments?

Bravo to the UK for doubling its insurtech funding YoY! Bravo to the rest of Europe for a nice increase (+44%), esp. Sweden and Spain! High five to France for maintaining its numbers! 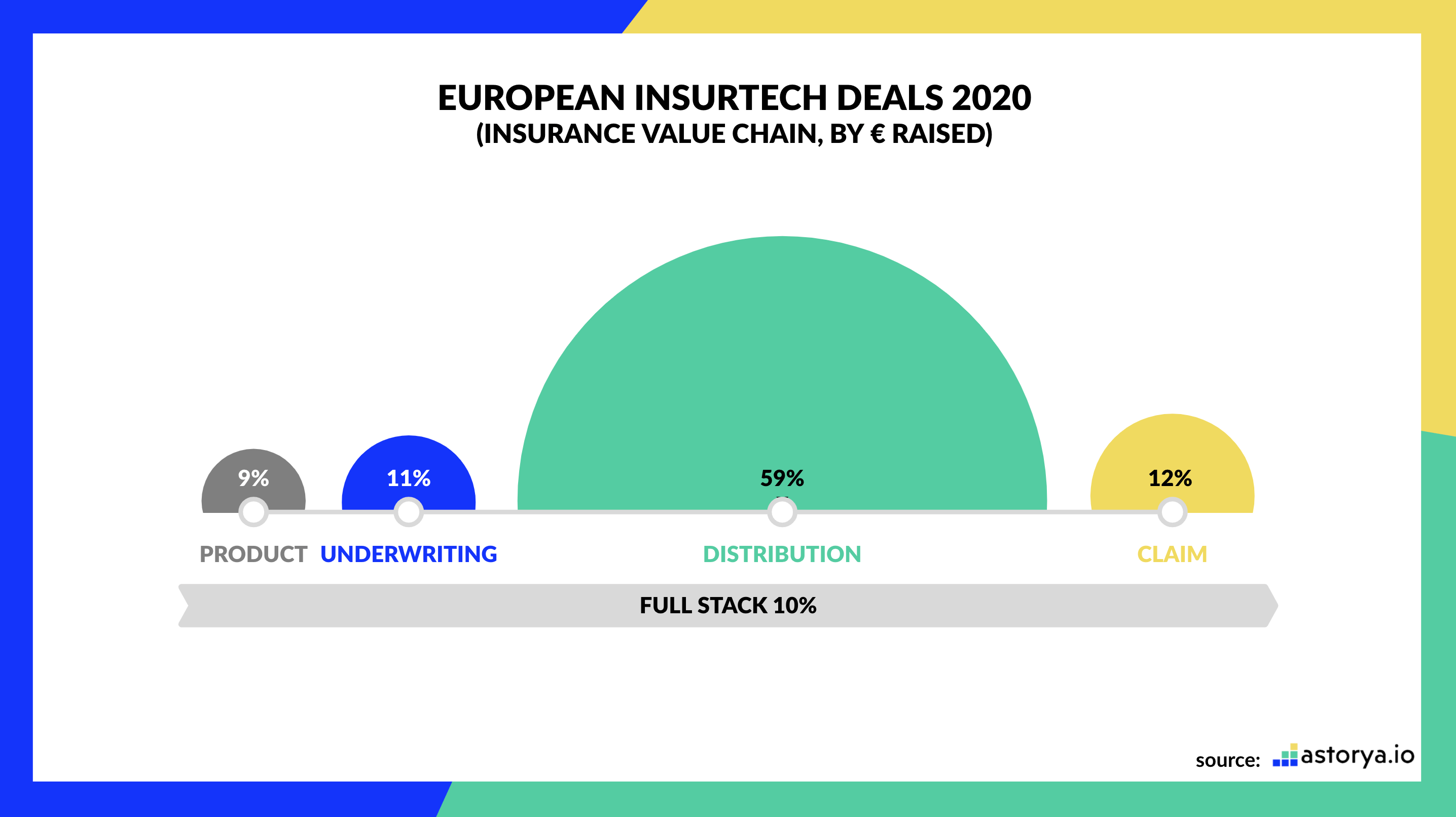 It’s great to see that distribution is leaving a bit of space to other parts of the value chain, which are often more tech savvy and have more impact on corporate development. In 2019, they took over 75% of funding, down to 59% in 2020.

Insurtechs building insurance products and underwriting models grew from 6% cumulatively in 2019 to 20% in 2020, which made us split them into two separate categories. As mentioned in astorya.io half-year review, our belief is that this growth is due to the significant growth of funding in the UK, the capital of actuarial talents.

Great news! (Pre-)series A deals grew in number and proportion, with 30+ deals below €3m for ~€50m in total. Bad news. We still need more very early stage funding, from angels, VCs and corporates!

Also check out our list of every investor that was active in the European insurtech space last year.

Beyond the investment activity that will happen this year - more or fewer deals than last year? smaller or bigger rounds? - insurtech startups' activity will have to be monitored closely. As a seed investor, we have spotted a few trends that may keep growing in the coming months:

Starting with insurtech positioning, we anticipate more startups will seek the insurance licence. It started with Zego that was the first insurtech startup in Europe to move up from MGA to licensed player at the end of 2019. And more recently Getsafe announced it was under the process to get a license too.

Another trend that we see surging on the market: platforms are progressively considering offering insurance as part of their customer journey. Hence, insurance may increasingly be embedded. In late 2020, Qover announced it was embedded into Revolut, and earlier the online driving school Ornikar announced its project to distribute car insurance. With a huge market opportunity (see here) we might see more platforms adding insurance to their offer.

Ultimately, after a first insurtech wave mainly focused on personal lines and mendatory products, more startups are now targeting SME - either with a direct to consumer or b2b2c approach - and we believe new risks (weather, business outage, cyber, etc) will remain an exciting opportunity for new players entering the insurtech space.

Insurtech in Europe: 2020 in review
Comments
Follow the developments in the technology world. What would you like us to deliver to you?
All