While companies are looking to the Baltics and Eastern Europe for talent, the truth of the matter is, that those resources are drying up. Here's why Google is doubling down on the Three Seas Region.
Julia Gifford 19 July 2022
Share
Facebook Twitter Linkedin

Google recently announced that they would be committing 5M USD to support non-profit projects driving digital inclusion in a very specific area – the Three Seas Region.

What is the Three Seas Region, you may ask?

It's a collection of 12 EU countries that connect the Baltic, Black, and Adriatic Seas. More specifically, Latvia, Lithuania, Estonia, Poland, the Czech Republic, Slovakia, Hungary, Slovenia, Austria, Croatia, Romania, and Bulgaria. They make up about 14% of the EU's GDP, are the fastest-growing countries in the EU, and arguably are the solution to Europe's biggest tech problem – talent shortage.

Europe's innovation scene has a growth problem. A study by the Korn Ferry Institute found that by 2030, Europe will have an unrealised output of 1.323 trillion euro due to a talent deficit, and the tech industry labour-skill shortage will reach 14.3 million workers. Startups and tech companies are already in a battle over talent to hire the best people to build out their visions – and for them to be able to grow to their full potential, they'll need a lot more than the current market has to offer right now.

That's why tech giants like Google are starting to focus on digital inclusion. While $5M sounds nice, is it enough?

Europe is divided – but not in the way you might think

First, some background. Society in Europe is siloed – one part is incredibly tech savvy, the ones building startups, coding, developing. Then there's the other half that can't even turn on a computer.

The Digital Economy and Society Index (DESI) shows that 4 out of 10 adults and every third person who works in Europe lacks basic digital skills. And only 31% of the European population holds advanced digital skills – something more than turning on a computer, creating a Word document, and maneuvering in email. Women are also poorly represented in the tech space, with only 1 out of 6 ICT specialists being women, as well as only 1 in 3 in STEM.

If you isolate the Three Seas region, those numbers fall even lower. 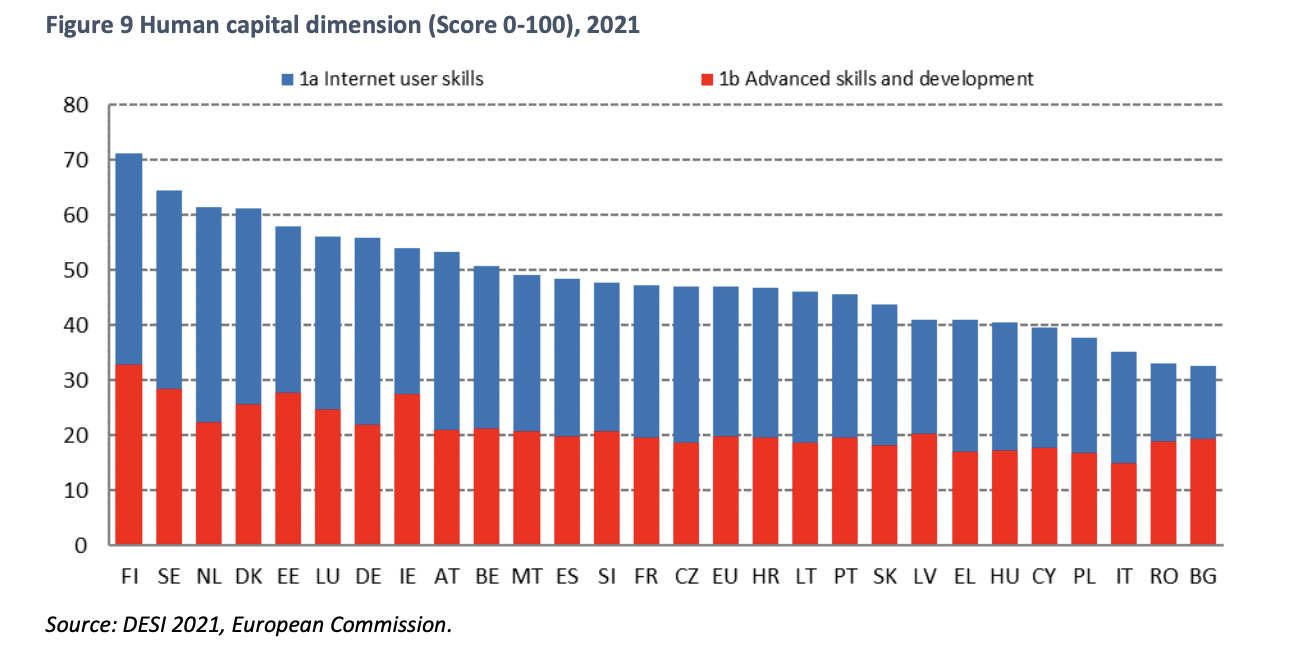 We can see that those countries in the Three Seas Region have, on average, lower tech proficiencies. And while that may seem like a negative, it also means that there's the most room for growth.

Imagine then the ROI on driving up those numbers in a region that holds 25% of the EU's population. There is huge potential for scaling the number of available tech workers.

The looming talent shortage a threat to European growth

Several industries and communities are already feeling the squeeze. Cyber and AI fields are sounding the alarms that there isn't enough talent to fill current needs – let alone those of the future, which will be considerably more significant.

Estonia has also developed a tech shortage action plan. Siim Sikkut, the former CIO of Estonia, presented a plan for tackling the talent shortage, which was presented at Startup Day in August of 2021. The plan detailed 3 solutions, including bringing talent from abroad, training young people, and finally, upskilling the rest of society.

Europe is facing the real risk that it won't have the workforce to continue to scale its startups.

This, in turn, spells trouble for European competitiveness as a whole.

It's been repeatedly emphasized from various sources that Europe is trailing behind the rest of the world. I spoke to Janis Grevins, the director of the Riga Business School, during the Three Seas Initiative Business Forum. He shared that Europe is behind the US, Canada, Asia, not in technology adoption, but in technology development. We run the risk of becoming chronic consumers, rather than creators and owners. We need the tech talent to build out these services.

This is a focus that the EU has adopted. The European Commission website states that “The European Commission is determined to tackle the digital skills gap and promote projects and strategies to improve the level of digital skills in Europe.” Their multiple programs, such as the Digital Skills and Jobs Platform, the Digital Europe Programme, the DIGITAL Work Programme 2021-2022, with funding at nearly €2B.

But is this enough?

The tech sector steps in

Big change can rarely be implemented by one company or one political institution alone. Change happens when the snowball really gets moving. And Google, with its investment, is looking to get it going.

The tech giant's reasoning for the $5M investment was that by supporting digital inclusion in 3SI countries, it would lead to a more resilient and connected civil society across the region. The announcement was made in Riga, Latvia, where the Three Seas Business Forum was held. The $5M is expected to be committed by the end of 2023, and will go to support non-profit projects that contribute to said digital inclusion. One of those, for example, would be Riga Tech Girls, a not-for-profit that provides tech education for girls and women.

Google isn't the only company investing in future tech talent.

MikroTik, the Latvian wireless ISP company, in collaboration with the Riga Business School, is investing majorly in the next generation of tech workers. This year, they're piloting a program in 5 schools, where Harvard IT programs are being translated to Latvian and taught at the high school level. They're also sending 30 teachers, 1 from each region, to study at Harvard. That way, there will be at least one Harvard-educated teacher in each region of Latvia. If successful, more programs will be translated, and more teachers will be sent for further training.

MikroTik also commits 1M euro per year to develop highly advanced digital skills in institutions of higher education – fostering the technology, high-speed networks, and knowhow for big data processing and High-Performance Computing to move forward in areas such as genome sequencing for cancer and Covid research.

It seems that MikroTik shares this sentiment with Google. But it also seems like MikroTik is making much more of a investment. Because let's be real – what is $5M spread across 12 countries? That's just about $417k each. The gesture is nice, though.

Closing the digital skill gap is our best bet

While companies are looking to the Baltics and Eastern Europe for talent, the truth of the matter is, that those resources are also drying up. For that reason, we're seeing the need for a focus on closing the digital skill gap, which is hilariously large for modern-day Europe. And public and private institutions alike know that this has to change – everyone's future well-being depends on it.

While $5M is a good place to start, we'll need far more action and interest at a grassroots level, and support for grassroots organizations, to bring the skills to the communities that have the biggest potential to impact the availability of tech talent in Europe.

Google's $5 million solution to Europe's biggest tech talent problem – investing in the Three Seas Region
Comments
Follow the developments in the technology world. What would you like us to deliver to you?
All