Despite all macro-economic trends and specifically imbalances which characterized the year 2022, the European technological ecosystem seems strong, although it shows a slight decline in investment in 2022 compared to 2021.
Tamara Djurickovic 07 December 2022
Share
Facebook Twitter Linkedin

Despite all macro-economic trends and specifically imbalances which characterised the year 2022, the European tech ecosystem remained strong, although it shows a slight decline in investment levels when compared to 2021.

It is quite clear that in some regions, Europe is facing a lack of digital adoption compared to other, more prosperous regions. Released today, the Atomico State of European Tech report shows that those countries that might have a problem with digital adoptions are the ones that had a lower level of investments in the tech ecosystem.

If we have in mind that 89% of the European population is using the internet, and 98% are aged between 15-24 (according to the ITU), it is definitely something that should be born in mind from both sides – companies and their services, but also investors when choosing where and in which kind of companies to invest in.

According to the Atomico report, the countries with a higher portion of European GDP especially compared to the portion of the European population are the ones that have the higher level of funding raised by VCs. However, there are a couple of technological leaders which are indispensable in this ecosystem like the UK, France, and Germany which raised more than 50% of total investments.

On the other side of the coin, although they are among the top 10 in terms of the total amount of funds collected by VCs, the level of collected investments in Spain and Italy is considerably lower compared to their population. The same situation appears with the countries outside of the top 10, the "Rest of Europe“ group. 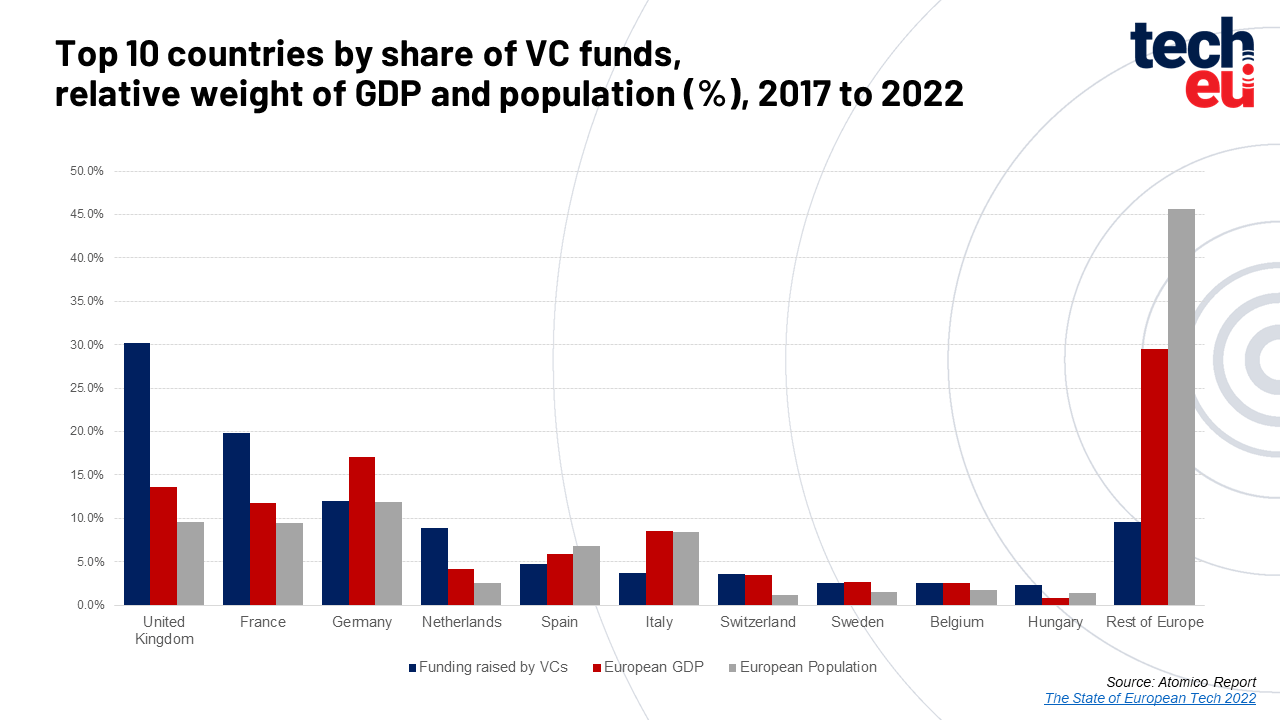 Another approach to analyzing the ecosystem is to see the share of investment in GDP. According to the Atomico report, Estonia is still the leader reaching an investment level of a 3.6% share of GDP (with an increase of 2% between 2020 and 2022). Croatia is the only other country that reached an investment level above 1% of GDP in 2022. 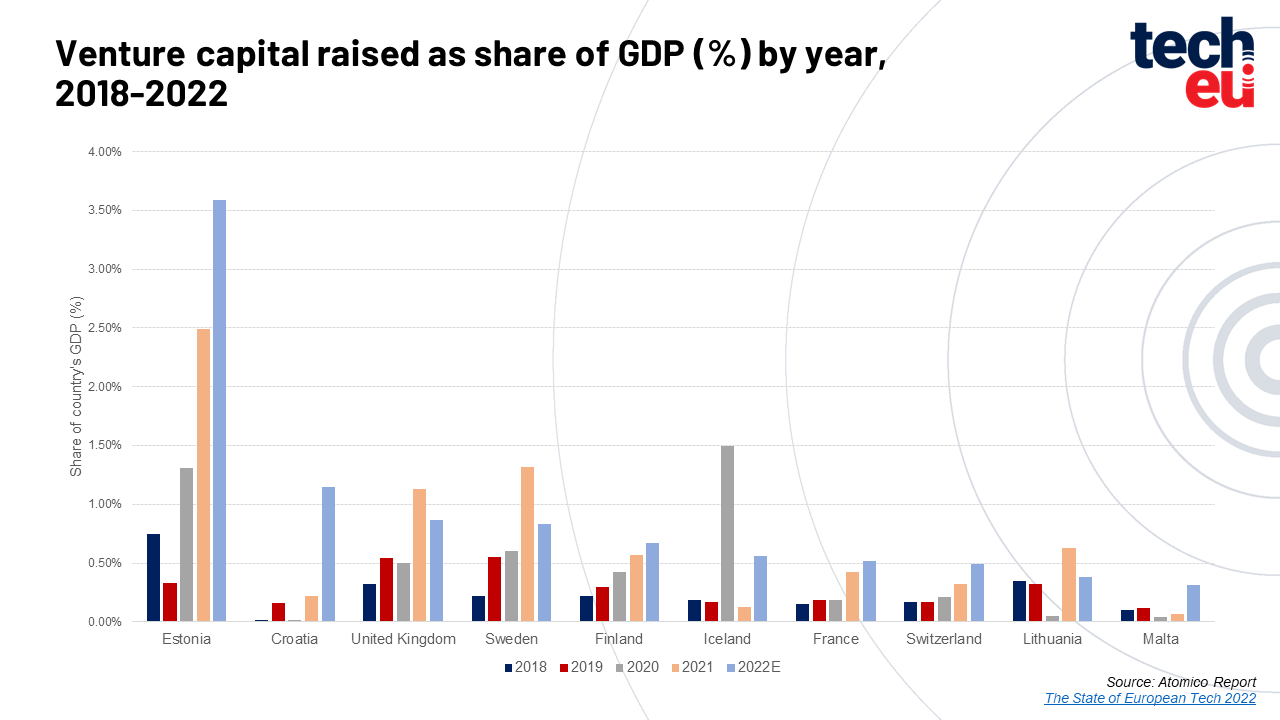 We might come to the conclusion that those countries that have higher GDP compared to the population, are the countries that encourage the development of the tech ecosystem, thus stimulating innovation and investments.

There are still technological leaders in the ecosystem but in relative terms, the rest of Europe shows strong growth

The Atomico report also shows that capital invested in Europe year-over-year is raising with a slight decrease in 2022. If we dig deeper, we will notice that in 2020, with the "covid pandemic“ peak in Europe, the level of investments was a bit lower compared to the year before.

On one side we could expect that the digital ecosystem could feel the benefits of working and educating from home, because of all the needs for digital services. But on the other side, a significant raise in investments can be noticed a year after, in 2021 (more than doubled compared to a year before). Probably 2020 was the year of reconsideration and planning, 2021 the year of implementation of these plans, and 2022 definitely the year of saturation in certain countries.

Although the countries outside of the top 10, or the so-called "Rest of Europe“ are significantly behind technological leaders, growth of the invested capital year over year is also noticeable here (from 9% in 2018 to 13% in 2022). 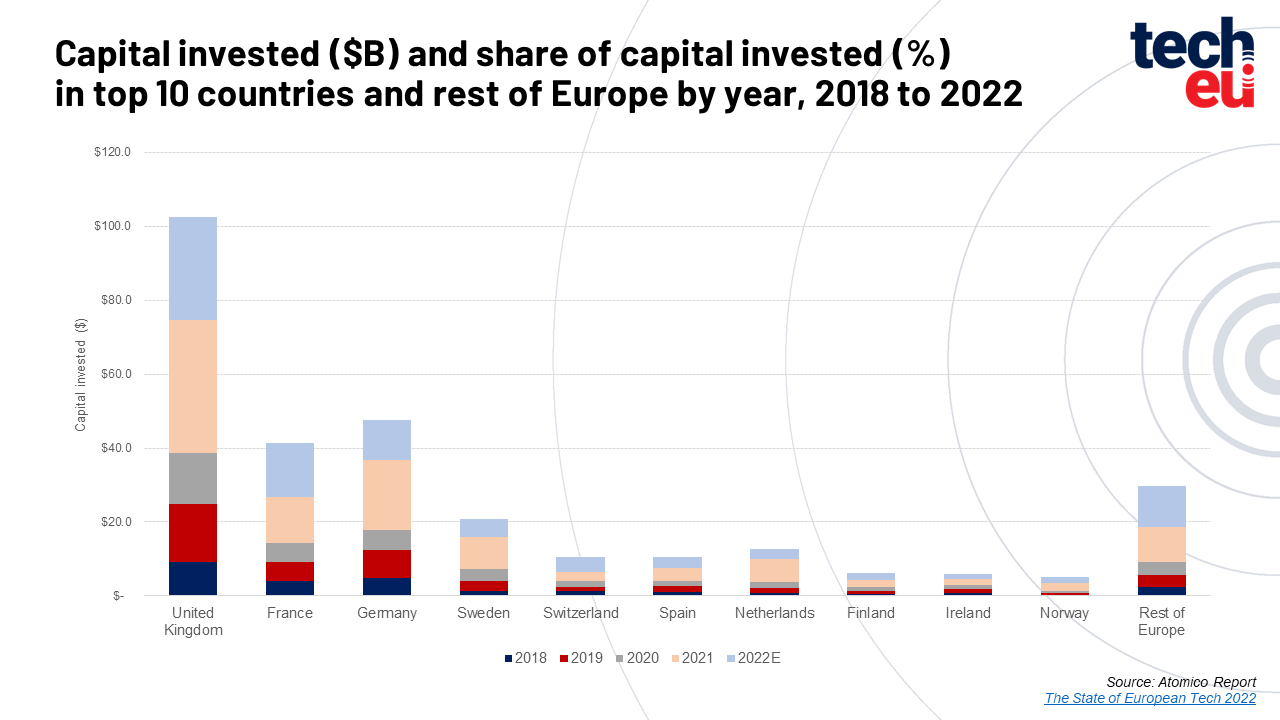 France and the rest of Europe are recording progress

Despite the fact that the UK and Germany are leaders when it comes to the absolute growth in capital investment (the UK has collected 35% of total investments in Europe in the last 5 years) these countries, on a relative basis have been losing share compared to other parts of Europe.

According to the Atomico report, the investment level in the UK is continuously dropping year over year (22%).  On the contrary side, France is continuing to increase its share with 17% total capital invested in Europe in  2022 and is the only country from the top 10 which has already reached the level of investments from 2021.

While Germany is still ahead of France in terms of the total value of investments collected in the five-year period, in 2022, France has definitely surpassed Germany and achieved greater growth. 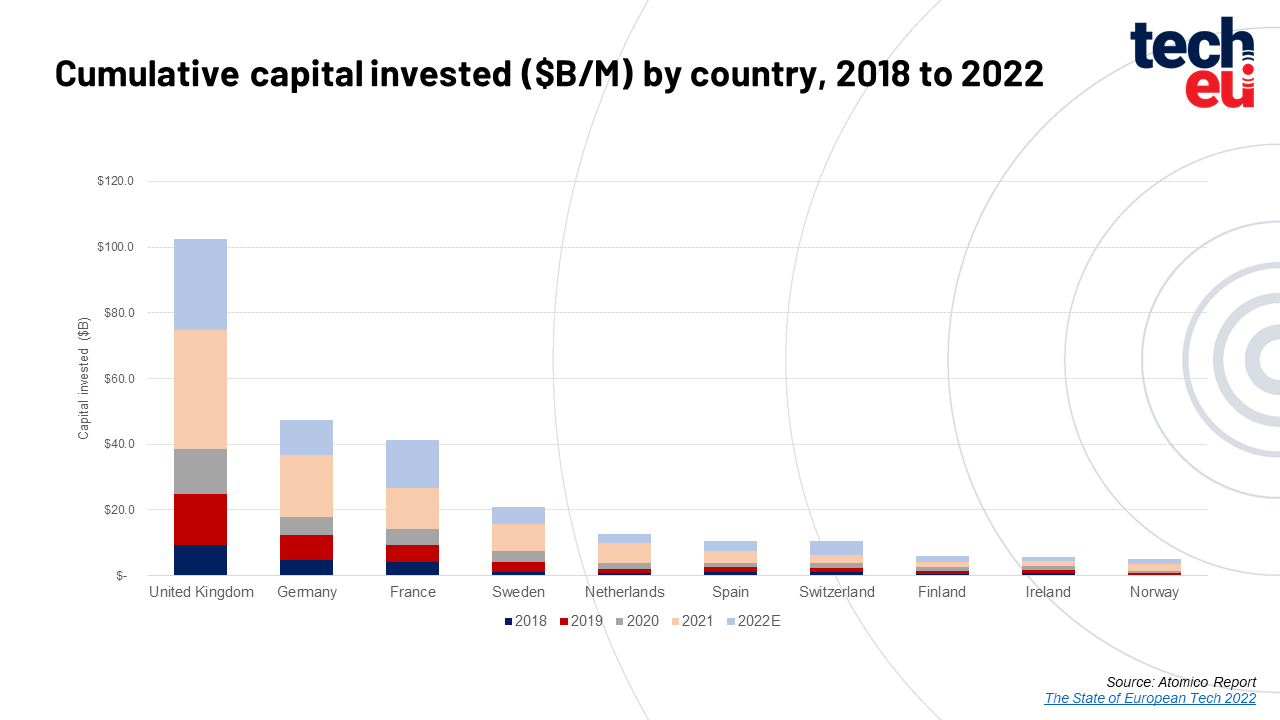 So the questions that arise here are – why is the rest of Europe facing a lower level of investments compared to the previous year? Is it because of the lack of initiatives, lack of strategic approach and understanding of the importance of digital development, policies that are not covering the technological ecosystem, and not protecting startups specifically in those countries that are lower on the development scale, etc?

One of the answers is contained within the geopolitical and economic disbalance that has gripped Europe in 2022. But besides that, there is a lot of optimism among European survey respondents about the future of the European technology ecosystem than a year before. According to the Atomico report, 61% of the respondents in Portugal felt very optimistic about the future of investments within the European tech ecosystem, while in Poland, nearly 40% of respondents were less optimistic than a year before.

There is definitely space for optimism about the development of the European technological ecosystem. As stated in Atomico report "the trendline is clear - investors have realized the increasingly geographically diverse set of opportunities that exist across Europe.“

Atomico's State of European Tech report can be downloaded here.

In addition to our top-level highlights of country trends above, we’ve also had a look at:

A country-specific analysis - European tech show resilience in 2022
Comments
Follow the developments in the technology world. What would you like us to deliver to you?
All