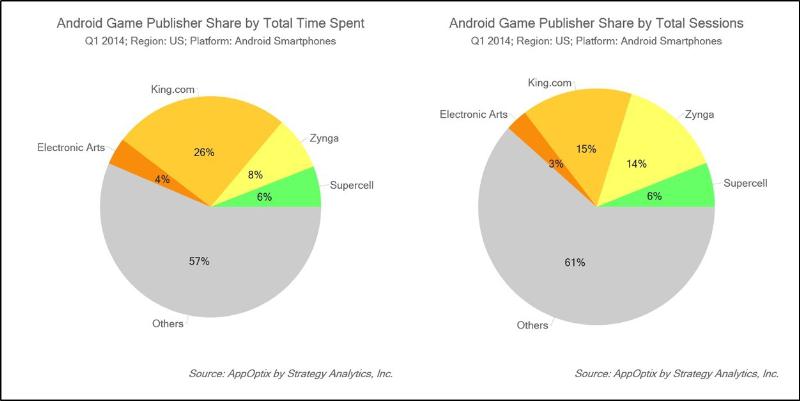 According to the most recent data from Strategy Analytics' AppOptix platform, Candy Crush Saga maker King.com is "comfortably ahead of others" in total time spent on gaming on Android in the US.

Across all of its titles, the Swedish-British publisher occupies 26 percent of the total time spent on gaming activities on Android smartphones in the United States, according to Strategy Analytics.

Both games are featured in Strategy Analytics' top 10 titles.

The analysis is based on more than 1 million individual gaming sessions across more than 1200 Android smartphone users in the US during Q1 2014.

Gaming as a category, occupies 13% of the time spent across all activities in Q1 2014. Based on our analysis, a typical user engages with gaming apps 17 minutes per day. > > > Our data suggests, the current market dynamics is a zero\-sum game, where time spent on a new title is likely to come at the expense of another title.

Candy Crush Saga maker King dominates in total time spent (26%) on Android gaming in the US: Strategy Analytics
Comments
Follow the developments in the technology world. What would you like us to deliver to you?
All