Doom and damnation for Europe's wearable tech startups! Unless ...

Editor's note: (This is a guest post by Wearable World CEO Redg Snodgrass, who just launched the first wearable tech-only accelerator programme in Europe and is hosting a related event called GLAZEDcon at BL-NK in London next week.)

Over the course of the last year, Wearable World analyst Craig Dudenhoeffer has indexed over 2,500 wearable tech startups for us and our partners (see graphic below) - and what we’ve seen is a significant uptick in brilliance and excellence, particularly in Europe.

On a major side note: the top wearable companies in the USA utilise MotionX for that, and that company is run by Philippe Kahn, a French transplant. Contour and its CMO James Harrison, originally from the UK, is GoPro’s biggest competitor. There are plenty more examples where those came from.

However, there are many pending issues on the horizon for EU wearable tech startups, and things may get tough if these issues remain unfixed. 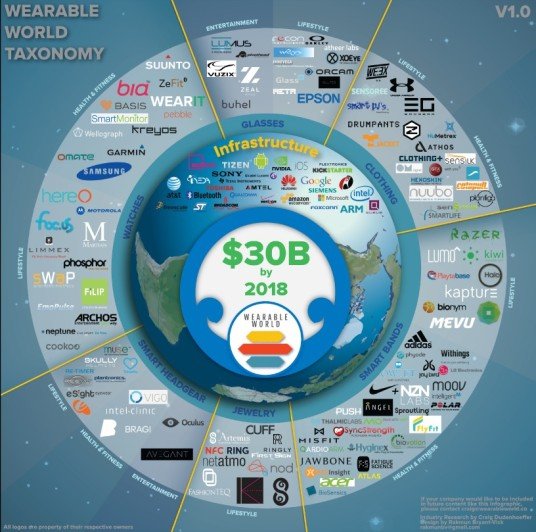 Yes, there are many European startups launching great products in the burgeoning wearable technology market, helped in no small part by the availability of badass and relatively inexpensive skilled workers, combined with some very smart thinkers (and tinkerers).

And yet, all the major acquisitions in this space have happened in the United States: Oculus Rift, Nest, Beats, SmartThings, Basis - need we go on?

Why is the case? One thing's certain: it's definitely NOT happenstance. What it ultimately comes down to is three things: DATA, FUNDING and MARKETING.

With regards to marketing: EU wearable tech startup founders should stop being such negative nancies, or as I'd like to say, European when it comes to marketing their wears.

In this (wearable) world, you don't get anywhere being modest and constantly trying to under-promise and over-deliver. What it will get you is last place in a group of unmentionable products. Instead, market like us Americans do! We brag, we cajole, and we do it with gusto.

The truth is your products are going to get delayed, have early design flaws and be limited in functionality and usability. Your initial set of users will be very gracious if you just listen to them and iterate the product based on their feedback. If you focus on hitting your product niche case and genuinely take care of your users, you'll turn them into a fan base while improving your product.

Promise the world and win your tiny wearable kingdom by making something your users want - and please don't forget to market the hell out of your product even if it's not quite there yet.

Under-promising and over-delivering sounds good for customer service and whatnot, but I promise you that doing it when your crowdfunding campaign kicks off is going to translate in little uptick. If some guy can raise $60,000 for a potato salad, then your startup should be able to get through this process untarnished. Just make it sizzle and pop a bit, okay?

My other beef is the shitty way European investors tend to look at the wearable technology market.

Aside from a handful of excellent ones such as DN Capital, it seems nearly impossible to even get angels or VCs to give the market some solid thought. Many of them are on their way to treat this market just like they did the mobile one, which is to miss the early-stage big return investments and then follow, only to make precious little money.

This should be steak and potatoes for European investors. We're talking about real, tangible products, and crowd-funding can prove early interest/revenue. What's holding them back?

There's a clear lack of angel investments in the European wearable tech market at the moment, particularly because of a "bad hunter/fisherman" mentality. Bad hunter means EU investors tend to pull so much equity away from the founders that, when their portfolio companies exit, too little is left for the entrepreneurs to become angels themselves.

I find that European investors take large pieces of equity for very little capital, which effectively increases rather than decreases the risk of failure. We've seen incubators take as much as 30 percent (Wearable World takes up to 3 percent). This has several knock-on effects.

It puts entrepreneurs at a disadvantage, and when confronted with aggressive VCs it makes deals untouchable because the founding team will be disincentivised and diluted to below market salary.

The capital required to get a (first iteration of a) wearable tech product to market and set up a solid crowd-funding campaign is about $150,000. One of our companies, Skully Helmets, hit their crowd-funding mark in the first 6 minutes and have gone on to be Indiegogo’s #1 crowd-funded wearable tech company. Raising $150,000 at a really low valuation would have been a complete non-starter for companies like them.

Data everywhere but European entrepreneurs seemingly dare not touch it. This mentality that peoples personal data is a sacriment is hindering EU startups dramatically.

Regardless of the good/bad and who, we all as a wearable community need to see data as transactional and conditional for building products of convenience. End users are willing to give this data up as long as your product enhances their quality of life. The real issues we have is collecting data just for the sake of it.

If you are going to succeed in this market you must understand context. Contextual understanding is determined through collection, interpretation, and product iteration. EU governments aren’t figuring out how to support the betterment of human life with their currently restrictive policies, yet EU startups will die in droves if they don’t collect and smartly use data.

We are all in favour of stiff penalties for idiots selling the data for no reason, but in order to leverage something for product iteration means we need to be able to use it to make better products.

To sum it up: there's no question EU startups are great at making beautiful, smart, well-designed wearable technology products. But if they don’t get their shit together about data collection, funding, and marketing they will become minor acqui-hires by American startups with lesser technology/design.

If I sound aggressive it's only because I think we are at a real inflection point for the European wearable tech ecosystem, and I’d love to see tons of successes! I invite you to join us in this conversation at GLAZEDcon in London next week.

Doom and damnation for Europe's wearable tech startups! Unless ...
Comments 9
Follow the developments in the technology world. What would you like us to deliver to you?
All

NEXT
Polish startup Brainly raises $9m to make a major push into the US with its social learning platform
Brainly, the Polish edtech startup that we…
Robin Wauters