Bulgaria-based Telerik has 1.4 million developers worldwide using its tools to build great software, but it has larger ambitions of becoming the next Oracle or SAP. Ivo Spigel grilled Telerik's co-CEOs on that.
Ivo Spigel 22 October 2014
Share
Facebook Twitter Linkedin

It's like a Pavlovian reflex. You say "Eastern Europe", I say "coding sweatshops!"

In the widespread tech stereotype, 'Eastern Europe' is a place where there are lots of smart – largely poor – people who can code really well. In fact, the further East you go – Ukraine, Russia, India, China – the smarter and cheaper they supposedly become.

Yes, outsourcing is thriving in Bulgaria – as it is in many countries worldwide. However, more and more Bulgarian companies are breaking out of the 'sweatshop' metaphor to build products and services that bring value to a global customer set.

Telerik, a software company founded in Sofia in 2002 is one such company. (The name is pronounced with the accent on the second 'e', to rhyme with 'Eric'.).

Newsflash: this just in: Telerik has been acquired by Progress Software for $262.5 million.

The four co-founders – Vassil Terziev, Svetozar Georgiev, Hristo Kosev, and Boyko Iaramov – realized early on that they needed to move from coding to building their own products.

Today, besides its headquarters in Sofia, Telerik's team of more than 800 employees is spread over offices in Europe (Munich, London, Copenhagen), the US (Boston, Austin, Palo Alto) as well as Australia (Sydney) and India (Gurgaon).

After being best-known for its Microsoft-based developer tools for Telerik's first seven to eight years, the company has more recently expanded not only beyond the Microsoft platform, but also beyond just developer tools, into enterprise-grade products and platforms such as the Sitefinity content management system and the 'Telerik Platform', a complete SaaS platform for developing web and mobile applications.

Recently, I caught up with Telerik co-CEO's Terziev and Georgiev about the company's journey in the last 12 years.

tech.eu: How and why did you start Telerik?

Terziev: We had a really great founding team at the start. Interestingly, only one out of the four of us was a developer. First, we started outsourcing just like everyone else in Bulgaria and the region. However, we quickly figured out that that wouldn't work, for a number of reasons.

We decided we would "productize" some research that Kosev, our CTO, had been working on. Kosev gave us an ultimatum to find at least one customer for this product in the next two weeks – and we succeeded. The product was a .NET component for rich text editing and we indeed had our first customer within two weeks. After that, we started adding more products and more customers and were able to grow quickly over the next 12 years.

When looking at the map of global locations, my assumption was that the office in Gurgaon, India is home to a hard working team of talented Indian developers.

"No, no," Terziev corrected me. "The bulk of our development team is in Sofia and we also have a great and growing development office in Boston. Our Indian presence – for the time being, at least – is there to support our customers and loyal community of developers. We're proud that many major US and global corporations are our customers, many of which have large dev teams in India using Telerik products. Once we get large Indian corporations to embrace Telerik products, the office in Gurgaon may very well expand to support a significant sales operation as well."

Telerik started out as 'developers building tools for developers' and the mindset is still very much present in the company's communications. For instance, its website urges you to "develop experiences" and describes the product portfolio as "UI frameworks and app development tools that 1.4 million developers love".

The word "developers" appears three times in the two main slogans – front and center – on Telerik's home page... Images of Steve Ballmer bouncing around the stage in those YouTube videos immediately come to mind.

Alhough, that image wouldn't be entirely misplaced. The dev tools Telerik first built were based on the Microsoft .NET platform. In the early years, this is what Telerik was known for: A builder of Microsoft-based tools and components or "developers for developers".

As the product portfolio grew, the developers buying and using its products increasingly became individuals and teams working inside some of the world's largest corporations. Today, reportedly 1.2 million developers in 130,000 companies, including 450 of the Fortune 500, are Telerik customers.

The company has expanded beyond the Microsoft platform to offer a full set of products for various platforms and, increasingly, mobile development. It is also pushing to expand beyond the "just tools" business into enterprise-grade "applications, solutions and platforms". The old "Microsft toolkit developers" legacy still seems to be haunting them, though.

tech.eu: Do you find that customers still mostly associate you with your Microsoft products?

Terziev: In all honesty – yes. For a while, we built the non-Microsoft products under a completely different brand, called Kendo UI. Then, last year, we realized our various product lines and brands were all over the map and we needed a much more integrated product and branding strategy. We then pulled everything under a single, simple consistent 'Telerik' brand. It's going to take a few years until customers stop looking at us as simply a 'tools business', but we have the strategy in place to achieve that.

Georgiev: Once we established good relationships with customers that trusted our products, we were able to follow their technology requirements as they evolved. That good relationship and customer trust is key to our business, not the technology we are building our products around. It was Microsoft before, now it's something else, who knows what it's going to be tomorrow?

Back in 2008, Boston-based Summit Partners invested about $10 million in Telerik. According to Terziev and Georgiev, they didn't do it for the money.

"We had been approached many times before by funds very keen to invest in Telerik," said Terziev. "However, we've been profitable since starting the company, so the financial aspect of an investment was never a priority. In the case of Summit, again, they came to us. We declined initially, but after conversations that took place over quite some time it became clear that they not only shared our vision, but had a lot to contribute besides cash."

"Working with Summit during the due diligence process and afterwards, they challenged everything about the way we do business and asked us hard, tough questions," he added. "Coming up with answers was critically important to us in defining our strategy over the next several years."

Earlier this year, a press release from Telerik hit my inbox announcing that Aaron Mahimainathan had joined the management team as Chief Product Officer.

In a way, the titles in the management team reflect the technical, developer-oriented DNA of the company. Besides the Chief Product Officer, there is also a "Chief Process Officer" (Iaramov), "Chief Scientist" (Kosev) and "Chief Technical Officer" (Faris Sweis).

Mahimainathan's background is strictly enterprise-class global software corporations: Siebel, Oracle and finally – prior to joining Telerik – SAP, where he was VP for the SAP HANA Platform. I was intrigued by the fact that someone with such credentials would join a company that may be large by local standards in Southeastern Europe, but still very, very small compared to his previous employers. 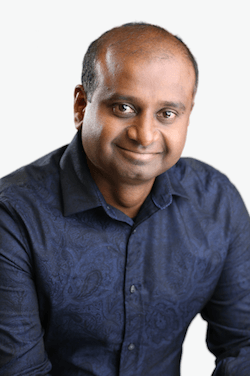 Mahimainathan (pictured on the right) was introduced to co-CEOs Terziev and Georgiev through former Siebel colleague Bogomil Balkansky, who is a Telerik board member.

"We met and talked many times before coming to an agreement that I would join Telerik as Chief of Product," Mahimainathan recalled. "What I saw here was a combination of ambition and cultural fit. On the cultural side, Terziev and Georgiev are amazing and ambitious entrepreneurs, but they also show a quality of humility and these are all values that I share... It's already a global company, but the aspiration and the ambition is to become the SAP or Oracle of the next generation."

When we touched on the issue of management titles – I pointed out that there wasn't a single management position that said either 'Sales' or 'Marketing'.

"I know – we'll fix it! Seriously, our first order of business was laying down the right strategy before we go out and find the right talent. But fair enough, it's a valid point," responded Mahimainathan.

When asked about what it would take to bring the company from the 'Visionary' classification to the all-important (to enterprise customer CIOs, at least) 'Leaders' quadrant, Mahimainathan responded:

"Gartner has two axes on that chart: Completeness of vision and ability to execute. We have clearly shown that our product lineup and strategy demonstrate vision. Now we need to execute on that strategy, in other words, show that a growing number of customers are willing to buy into that vision."

"That is a key part of my job – working with the dev team to make sure we have the right products for the market, and at the same time working closely with our key, enterprise customers in a way that keeps them happy and keeps us profitable. We're confident that executing on this strategy can take Telerik to the proverbial next level, and for us, that means becoming a multi-billion dollar company."

So what are the next strategic steps for the company?

"We need to build on our strengths," explained Mahimainathan. "Developers are our core community and there's no way we're abandoning them. Having said that, we are expanding beyond that core base and beyond our 'developer tools' DNA into higher-level applications and solutions. In terms of strategy, we've spent a significant amount of time over the past six to 12 months working that out, and our work is now cut out for us. It's primarily an issue of executing on that strategy."

Telerik co-founders Terziev, Georgiev, Kosev and Iaramov have built an awesome company from humble beginnings 12 years ago in Sofia, Bulgaria, in the middle of the Balkans. All that is history now, however, and not at all important to their global customers.

The key question is: Can they take it to the "proverbial next level", as Mahimainathan puts it, and realize their lofty ambitions of becoming the next SAP or Oracle? Only time will tell.

UPDATE: Time has indeed told! At the time of publishing this piece online, Telerik issued a press release announcing that the company has been acquired by US-based Progress Software. So, it seems Telerik will not, after all, be the "Oracle or SAP" of the next generation. It's a highly successful exit however, so we wish the Telerik team all the best as they continue as part of Progress Software.

From Sofia to Gurgaon via Boston - Telerik's ambition is no less than to become "the next Oracle or SAP"
Comments 1
Follow the developments in the technology world. What would you like us to deliver to you?
All