We take a close look at the 17 finalists for the upcoming LeWeb Startup Competition that have been announced so far, and made an attempt at categorising and weighing them before they hit the stage.
Robin Wauters 31 October 2014
Share
Facebook Twitter Linkedin

(Editor's note: this article was written by tech.eu in connection with a partnership with the upcoming Le Web conference in Paris, and was cross-posted on their blog.)

As a veteran of many a startup competition, and onetime lead organiser of one of the first European startup pitch battles for three years, I've seen my fair share of fledgling technology companies presenting their ideas through online application forms and on stage.

Serving as a judge for those applications and pitching sessions - many competition organisers ask 'outsiders' to rate startups for added perspective and to avoid bias - is hard work if you want to do it properly.

More often than not, we're talking about very early-stage companies, sometimes even downright embryonic, so what you are really judging is the founders' ability to convince you that they have a solid idea, team and a potential market in writing and/or presenting. It's not the easiest of tasks for them, but neither is the selection process for judges who take the task on hand seriously.

Enter LeWeb, which has been organising a global startup competition for as long as I can remember (the first LeWeb, which was actually called Les Blogs, took place in 2004). Previous winners of the competition, which include companies like Waze (acquired by Google for over $1 billion), tend to raise money from investors fairly quickly after emerging victoriously.

LeWeb recently announced the first 11 finalists for this year's startup competition; 9 more are or will be selected during its Startup Tour in 4 major European cities. As I wasn't part of the selection process for any of these finalists, I took a close look at 17 finalists that have been chosen to date, to see if there are any trends to be identified based on their respective profiles. The answer is: yeah, kind of.

In some cases, the finalists are seemingly doing something that's clearly based on real technological innovation and science - that is, if they can actually do what they promise.

One finalist, CrowdEmotion (UK), claims its cloud-based facial coding technology can capture micro-facial expressions to measure emotions. If companies can actually use that technology to get an idea of what their (potential) customers are feeling, desire or need, even with basic cameras on smartphones or laptops, that is an incredibly valuable proposition.

Another finalist all the way from Slovakia, RunForm, has built an iPhone app that it says can help people run more efficiently and without pain or injuries, by video-analysing their running behaviour through 'advanced algorithms' just like a - much more expensive - personal coach would do.

There are lots of runners out there, and you can bet most of them want to improve their skills or reduce the risk for injuries, so that's a big potential market - again, if the technology works.

A third finalist, Pilo (France), is building a new type of battery that recharges as you use it (for moving devices, specifically). The Pilo battery is still very much a promise/prototype, and it will store less energy compared to a regular AA battery, but apparently you will be able to recharge it simply by shaking - intentionally or otherwise - the device with intermittent energy needs that you're using.

It's fairly easy to write this one off in advance, but what if they can really make an eco-friendly battery that will last super-long? Plenty of use cases I can think of for that!

Originally founded by two physicists, NaturalCycles (Switzerland) is another LeWeb startup competition finalist that uses statistics and analytics instead of chemicals or surgical procedures in order to prevent pregnancies. It claims to be safer than the pill.

Not unlike Germany's Clue, the company makes mobile apps that essentially lets women monitor and manage their fertility cycles so they can be in control of when they (can) get pregnant. 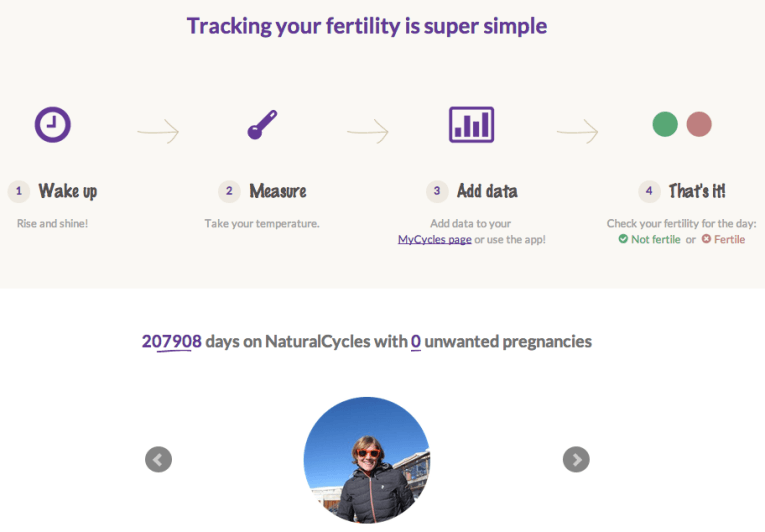 Some of the companies that will be pitching on stage in Paris next December are decidedly B2B-focused and often more services-enabled-by-technology companies than pure-play tech innovators.

A fifth finalist, ÖdeAl (Turkey), has developed an app that allows merchants to take short-term payments, no POS devices required. There are already a number of payment processing solutions for small businesses out there, but ÖdeAl is counting on its loyalty management tool, reporting system and compatibility with wearable technologies to make a splash.

It's entering a crowded space there, but on the other hand there's clearly a growing market for something like this.

Another B2B focused finalist is AirCall (France), which essentially lets businesses set up and manage their phone communications quickly and easily, using their existing devices.

Handling business calls across teams and locations is still a challenge for many customers, but it will be challenging for AirCall to break into such a saturated market. 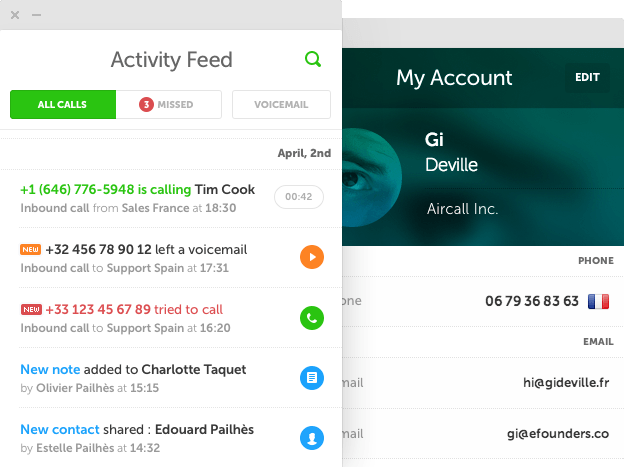 Not one but two finalists are focused on making online shopping for clothes easier, which isn't much of a surprise given that there's still a massive problem that needs to be solved here.

One is EasySize (Denmark), which analyses online shops' order history to 'predict' the size of their customers. The goal is pretty basic, but potentially lucrative: to help fashion e-commerce clients provide a better online shopping experience and to decrease returns.

Another is Fitle (France), which as far as I can tell from the fairly difficult-to-navigate website, aims to 'smarten up' e-shopping for clothes by only presenting customers with potential garments from a number of brands in their own size and style.

At the heart of the offering is a smartphone app that lets users create a 3D model of themselves with accurate measurements, so they can virtually try on clothes before buying.

Then there are a few companies focused on the advertising and content marketing industry.

Take for example Styla (Germany), whose says its enables brands to transform their content into a 'shoppable' magazines without any time-consuming layout or programming work. Its self-described mission is to bring "print-magazine aesthetics to online storytelling". 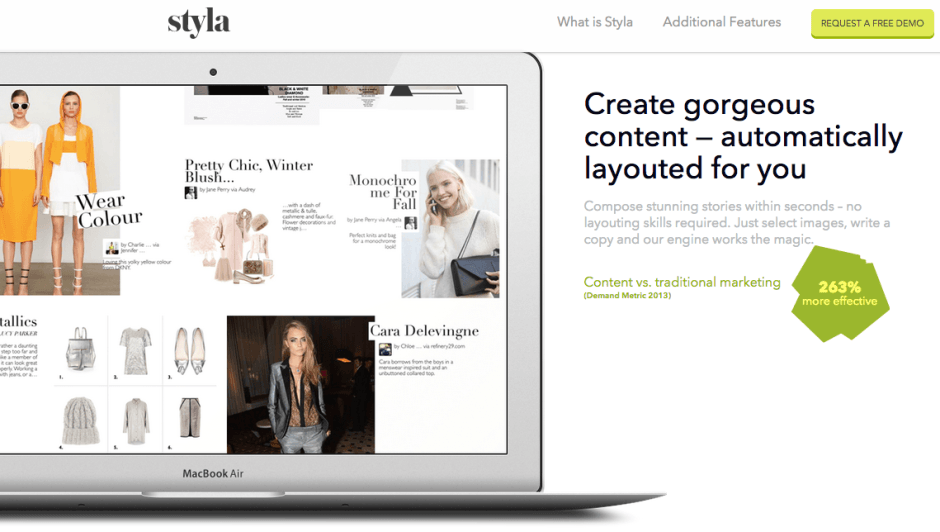 Another finalist tacking this space is SublimeSkinz (France), which says it has developed 'smart and efficient skin ads solutions for advertisers and publishers'. If, like me, you thought this was actually about advertising on your body, think again: what they mean is actually wallpaper ads for premium content sites, which are supposedly higher-impact. 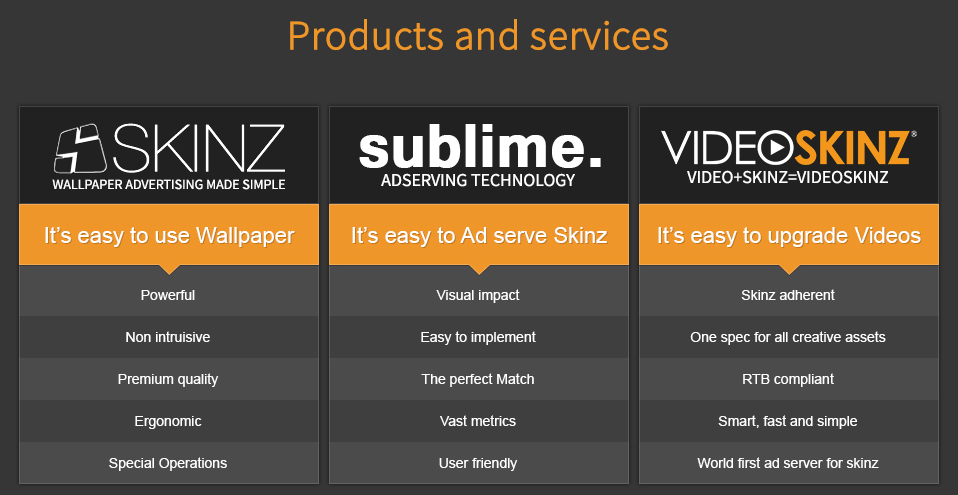 Another finalist, Proxy42 (USA), is a company made up of a "bunch of hackers, artists and game designers" that aims to build innovative game experiences that interact with people and the places and things around them.

The company has developed what it calls the "363R Trigger", a device especially created for mobile gaming and its first game, a Massive Multiplayer First Person Shooter that transforms the real world into a video game.

An interesting one is Kappo (Chile), a mobile social game designed to encourage users to use their bicycles more often by being in contact with their friends and/or cyclists from around the world.

To play it, users need to ride their bikes and get rewarded based on their efforts and environmental conditions, like jumps and weather. With all the data collected, Kappo offers cyclists insights and predictive analytics to help cities take better bicycle infrastructure decisions. 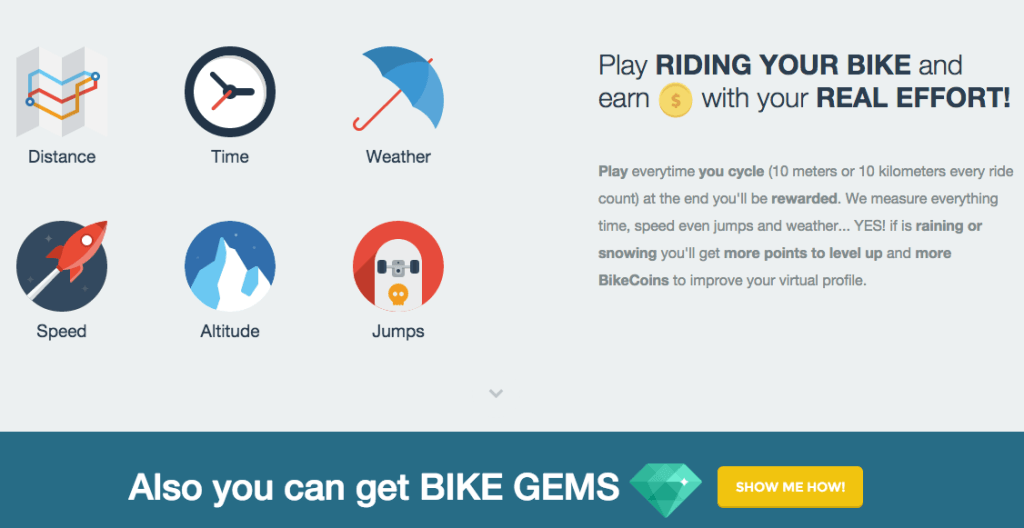 A bit surprising to see - so far - only one lean hardware startup in the list of finalists, and to be honest not even a totally original one.

Not unlike Germany's KIWI, Austrian startup Noki's plan is to create a smart door lock that removes the requirement for physical keys and connects to users' smartphones.

Still early days, though: Noki will kick off its crowd-funding campaign later this year.

Out of the box

And then there are the finalists that are almost impossible to categorise.

Take for example Jukedeck (UK), which builds software that writes personalised music by itself, note by note, at the touch of a button. Its technology composes original music based on a user’s settings, giving video creators, game developers and others a simple way of sourcing music.

Or Cuciniale (Germany), which develops products to 'digitalise cooking' and enable everybody to perfectly cook to one’s heart’s desire without any hassle. One of its products is GourmetPilot, which informs users about the ideal power level and cooking time, matched to their personal food preferences. Fairly oddball.

And finally we have local.app (Germany), which I can't quite figure out what they do. For what it's worth, it's described thusly: " a single app that automatically adapts its content to the point of interest, morphing itself into the location-specific 'local app'". Right.

The demo video makes it a bit clearer - it looks like an aggregator for local apps that automatically starts local businesses' apps based on your location - but still feels kinda gimmicky.

So, as you can tell from the many subtitles used, there's a lot of diversity in what these startups are all about, so that should make for an interesting competition.

A deep look at the 17 finalists of the upcoming LeWeb Startup Competition
Comments
Follow the developments in the technology world. What would you like us to deliver to you?
All

NEXT
A quick update from tech.eu
It's been a little over a year since we incorporated the UK company behind tech.eu, and 11 months since we launched the website. Since…
Robin Wauters