Holvi wants to build an online bank for SMEs and freelancers: A Q&A with CEO Johan Lorenzen

Holvi CEO Johan Lorenzen has set out to build an online bank for small businesses and freelancers. Ivo Spigel spoke with him recently to delve into what that means and how he plans to achieve it.
Ivo Spigel 11 December 2014
Share
Facebook Twitter Linkedin

The Pioneers Festival stage can be a formidable setting. Among the huge marble columns and chandeliers, a crowd of about a few thousand people are hungry for a spectacle. They want fancy, shining, colorful symbols of the new age of technology.

It's no surprise, then, that this crowd would be less than enthused if you walked up on stage to talk to them about... banking. Yes, banking. Isn't it just positively thrilling? Doesn't it send shivers down your spine when you think of ATM machines, mortgage status reports and the glorious image of piles of paperwork?

So Johan Lorenzen's job wasn't easy. Lorenzen is the CEO of Holvi, a new breed of bank. He managed to impress the audience, though, when speaking about the difficulties of banking today. Apparently, most of us would rather go to the dentist.

The crowd didn't exactly scream with excitement, nor did they storm the stage to rip Lorenzen's shirt off his back. I was intrigued, however. Intrigued enough to grab Lorenzen for a chat in the quiet back rooms of the Pioneers press space. It felt like we were both somewhat relieved to get away from the maddening crowd of the main stage and adjacent hallways.

The first time I met Lorenzen was also in Vienna – two years ago at the Pioneers Festival. He was a VC back then with Sunstone Capital. At the time, he hinted at leaving the VC world to cross over to the bright side of The Force.

Holvi, Finnish for "vault", wants to be a bank for the twenty-first century targeting freelancers and SMEs with a pan-European platform. It wants to be a full replacement to the traditional bank account we are all used to. It wants to be a user-friendly bank where you – perhaps together with a bunch of friends for the sake of planning a party – can open a bank account as quickly and easily as an account on any other web/mobile service or app nowadays.

Not that you'd be able to figure this out from looking at the Holvi website though.

It seems the company wants to keep it just a bit mysterious at the moment, but I pushed Lorenzen to provide some clarity and to explain a bit about the idea behind it.

tech.eu: Why doesn't your website actually explain what you do? Is that a mystery/stealth marketing strategy or simply something you need to do but just haven't gotten around to it yet?

Johan Lorenzen: Holvi was founded in Helsinki in 2011. It started with the needs of normal people and our aim is to solve problems that small businesses face every day. Our accounts replace traditional bank accounts and can be opened online in minutes across Europe. It's a simple one-stop shop to manage your business and finances. We are a payment institution authorized to operate across Europe by the Financial Supervisory Authority of Finland.

As to your question about the website – it's an issue we will be addressing shortly.

tech.eu: How long were your discussions with the Holvi team about joining them as CEO?

JL: We talked about this for quite a long time. I've known the founders for years, and then a year ago, I joined. We agreed there was a massive, massive opportunity in banking for small businesses. There's a huge number of micro and small companies overwhelmed with the way banks treat them today.

More and more people now make a living as freelancers or get their income from multiple sources. They might have steady jobs as teachers or doctors or lawyers, and then a hobby that's making some money, such as photography or translation or freelance PHP development. All of these small businesses and freelancers and professionals need a simple bank that works online and through an app that gives them the basic service/data they need to fill out their VAT forms.

With the banks today, we as customers need to pay for their mainframe IT systems, their multiple tiers of middle managers and their expensive glass and steel headquarters in the financial districts of London, New York and Hong Kong. We don't need any of that baggage at Holvi.

tech.eu: You have a really interesting group of investors, including Tekes (the Finnish government agency supporting innovation and R&D), Seedcamp and Speedinvest (an early stage VC out of Vienna). Can you tell me more about that?

JL: It's definitely a very interesting group, but also a great set of partners and we have worked together very well for the initial stage. Holvi joined the Seedcamp family a while ago. This year, in May, we closed a €1 million round with Vienna-based angel fund Speedinvest. Then, in July, we got regulatory approval and kicked off our first two pilot markets beyond Finland – Ireland and Austria. In September we got approval to start operating in 16 countries.

tech.eu: Which 16 and how did you pick them out from the 28 countries in the EU?

JL: We went primarily for the Eurozone countries.

tech.eu: I see Croatia is on that list, but the country doesn't have the Euro...

JL: Croatia was interesting to us for a number of reasons, such as the significant contribution of SMEs to the overall economy. We had a feeling that the people there were tech-friendly, so we would be able to get engagement with some early pilots. There were a few other indicators as well. We also wanted to get started in a few countries outside the Eurozone. Aside from Croatia, Poland is another one of these. 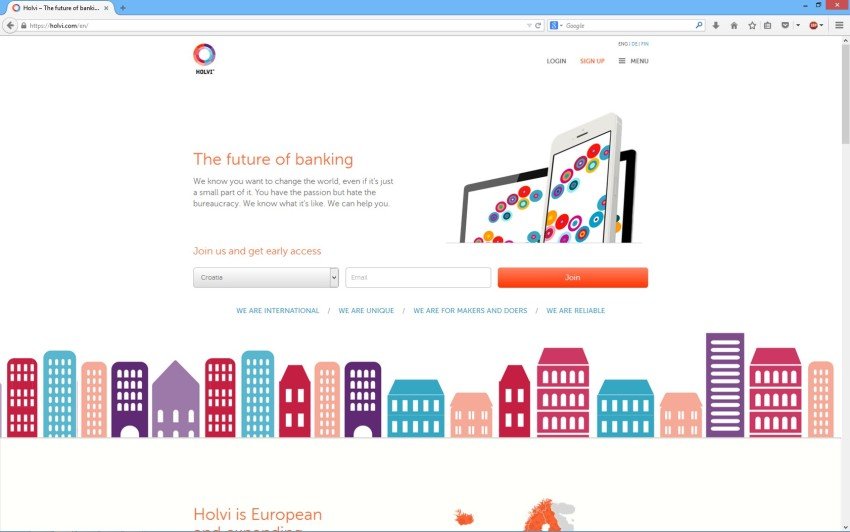 tech.eu: So you're not focusing on individual, retail consumers, nor on big companies?

JL: No. At this stage we want to focus very, very closely on a well-defined niche group of customers – a pretty large niche, by the way. These are very small companies as well as small crafts, individual professionals and freelancers. There is an enormous number of companies in Europe and worldwide that have five or fewer employees and the contribution of small companies, crafts and freelancers to the economy is growing fast.

tech.eu: Holvi is not a layer on top of my existing banking, right? So I don't need a bank account to use it?

JL: No, we definitely don't want to be, and are not a layer. Thanks to the pan-European Payment Services Directive, once we have received regulatory approval in Finland we can operate – completely within financial regulations – EU-wide.

tech.eu: Well, at least that's one good thing coming from the EU.

JL: Totally. So – you don't need any other bank account to open a Holvi account. You can sell online, issue invoices for your services, get paid as well as pay invoices and bills from others. If you choose to do so, your account can be shared with your friends just like a shared Dropbox or Google Drive folder.

tech.eu: Many freelancers use PayPal, do you support it?

JL: Not yet – we are working on PayPal integration, as well as others.We support all major credit cards and payment methods, including local payment methods like EPS in Austria and Sofort in Germany. We haven't seen major demand for PayPal yet.

Quite soon we will also have Holvi-branded credit cards so you can use funds on your Holvi account to pay via credit card.

tech.eu: What are the next steps for Holvi?

JL: We're going to be hiring a lot of people and working agressively on internationalization. Our priority is rapid expansion in Europe with a focus on the core countries. There are a lot of people here frustrated with their banks.

Holvi wants to build an online bank for SMEs and freelancers: A Q&A with CEO Johan Lorenzen
Comments 1
Follow the developments in the technology world. What would you like us to deliver to you?
All

NEXT
Q&A with David Lindsay, the tech brains behind fast-growing fashion e-commerce phenomenon Farfetch
As LeWeb describes him, David Lindsay is an…
Jaime Novoa