This morning, I attended a Google event in the Résidence Palace, a complex of buildings in the European Quarter of Brussels and a stone's throw away from European Commission HQ, Berlaymont.

Part press conference, part charm offensive, the event was organised in collaboration with organisations like DIGITALEUROPE and The Lisbon Council, with as its aim to position Google as a "growth engine for European business" and to support the 'Digital Single Market' idea.

Not expecting any major unveilings, I attended the opening keynote by Matt Brittin, who previously led Google’s northern and western European arm. Turns out Brittin's new title is 'President, EMEA Business and Operations', as Google chose today to announce that it is consolidating its European businesses under one banner, led by Brittin as its single exec.

Essentially, Google previously had two separate arms, split into a duo of regional groups. Those will now be consolidated into a single entity, henceforth spearheaded by Brittin.

Carlo D’Asaro Biondo, who had been in charge of Google's southern and eastern European business, will now lead on commercial partnerships across the wider region.

The rather drastic overhaul of Google's European business comes as the American company faces an increasingly combative regulatory landscape and scrutiny continent-wide. To wit: across Europe, legislators and business competitors are pushing to curb Google's power.

The new structure - which I honestly find more logical - should make Google better equipped to respond to 'local and continental challenges', Brittin said. Google's new head honcho for its EMEA business, who I also briefly met at the event as you can see below, will be based in London. 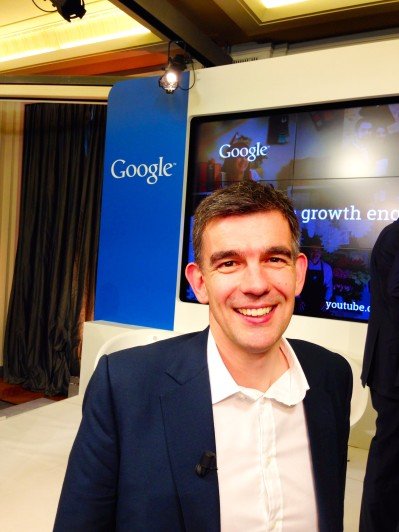 Also at the event this morning were 20 small business owners from 10 EU countries - including the UK’s Look Fabulous Forever, Germany’s Book A Tiger and Sweden’s Happy Socks - to explain why they love Google and how a EU-wide Digital Single Market could help them scale their businesses faster.

There were more announcements at the event, however.

Brittin said Google will earmark 25 million euros for a 'training hub' and train up to 1 million Europeans in 'digital skills' (using Google tools and platforms of course) by 2016.

Brittin said that Google has over 9,000 people working in Europe, and that most are in fact Europeans.

No more information about the digital skills training hub and plans was provided, but it's likely that they will look a lot like existing Google initiatives like Welweit Wachsen in Germany, or Actívate in Spain.

Brittin also made it clear that Google is backing a proposal to create a so-called Digital Single Market in Europe, one of European Commission President Juncker's top priorities.

Such a Digital Single Market would allow for a single set of rules to govern things like competition, data protection and privacy in all 28 European member states.

"We need a single market in the digital world that reflects the single market we enjoy in the physical world already. With over two dozen regulatory and frameworks to contend with, businesses stumble when they seek to sell, grow or hire across borders. The European Commission has rightly identified the digital single market as one of Europe’s top priorities," Brittin wrote in a blog post.

(All images above: credit tech.eu)

Under pressure, Google moves to consolidate its European operations and hands the reins to Matt Brittin
Comments
Follow the developments in the technology world. What would you like us to deliver to you?
All

NEXT
Meet Teamwork, the Irish collaboration software startup that grew to 2 million users with no VC funding - and no salespeople
(Editor’s note: In a series of articles,…
Charmaine Li