(Editors note: this article was written by tech.eu in connection with a partnership with the Startup Iceland conference in Reykjavik.)

In our latest 'Startup Spotlight' series, which features relatively under-the-radar but interesting European tech startups on a weekly basis, we shine a light on Reykjavik-based games maker Radiant Games.

Founded in May 2014 by Vignir Gudmundsson, Haukur Logason, Gudmundur Vidarsson and Þorgeir Karlsson, Radiant Games is a young startup aiming to spark children's interest in coding. The company's first game, dubbed Box Island, is slated to soft-launch in late July in Iceland.

We spoke to CEO and founder Gudmundsson in Reykjavik about how it all started, the benefits/challenges of working in the Icelandic startup scene and what's coming up next for the fledgling company.

Can you start by telling us briefly what Radiant Games is? 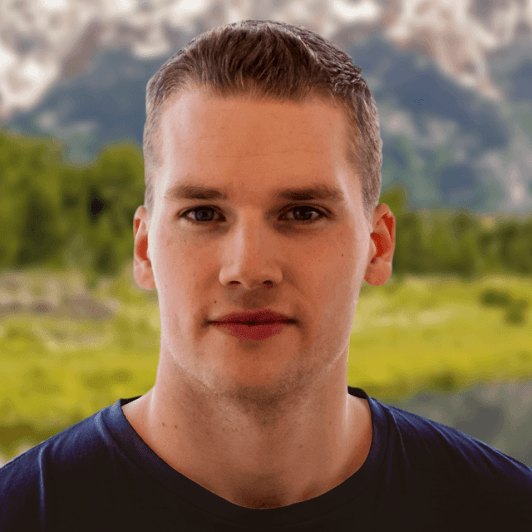 Vignir Gudmundsson: Radiant Games creates playful learning experiences that empowers children. We see a lot of kids who like playing on the iPad or Playstation, but find it very boring to turn off those devices and finish their homework. Not just that, a majority of the educational games out there lack focus on fun and entertainment. We are believers that if there isn’t any fun, there isn’t going to be any learning.

Currently, we’re building a logical puzzle game for tablets called Box Island. The demographics is eight or nine-year-olds and older.

We’re trying to create a learning experience that promotes a nice introduction into the world of coding. The goal is not to be very curriculum-driven or teach per se. We’re very careful when we talk about teaching versus sparking interest. We want to spark interest. Then it’s up to the many other partners like the schools, family and the parents to take it onwards.

How did you develop the game? What kind of research is it based on?

In September 2014, we started doing a lot of prototyping, researching, analysing and understanding the potential-market fit and seeing what’s out there in the market. We especially analysed many of the tablet games available to us because that’s the market we’re heading into. The MIT Media Lab is one of the core mechanisms in this coding industry for sparking the interest.

They offer Scratch, which is visual programming language that has been around for along time. Many of the applications from competitors have been built around this mechanism of dragging and dropping actions to form a visual program.

Of course, we're inspired by that and by other organizations but we really wanted to focus on the entertainment value. We looked at a lot of games that eight or nine-year-olds play when they can pick what they want.

How did you meet your co-founders?

Three out of four of the founders were from Reykjavik University. We didn’t know each other before that, but met through this shared passion and mutual friends who introduced us. We really wanted to change this because we felt like it was a huge problem. Coding has become the twentieth century literacy and we felt this problem ourselves so we were inspired by a younger version of ourselves. 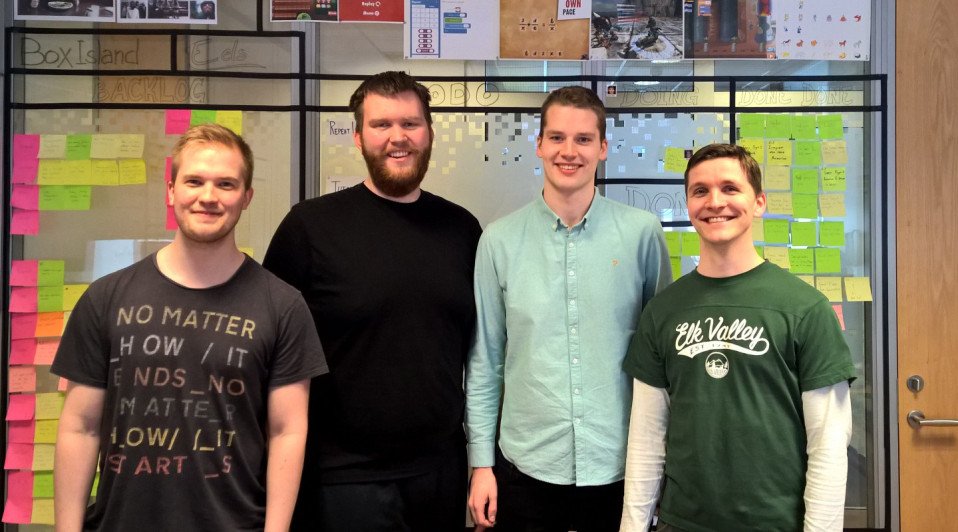 Three out of four of us have a computer science background, but most of us didn’t have any idea of what computer science or programming was until we were headed into university. We were like, 'Why are we getting the introduction when we’re around 20-years-old?' For me, for example, I was very good at math from an early age, but I didn’t understand the connection between math and programming or computer science until I was around 20. I felt like that was ridiculous, and so, so late. I wanted to get this introduction at least when I was 10 years old.

How is Box Island different from other games in this realm?

We try to focus on promoting this incentive – we ask ourselves: Why would a child want to participate in a game? We promote a story context and want to get you immediately into the game with these funny little boxes and trying to help save this little baby box in an adventure.

That’s one thing that seems to be lacking with competitors, they’re very driven on, 'Here’s a puzzle or a challenge and here’s another one.'

Essentially, yes, we’re building a puzzle game, so there’s a lot of puzzles, but we have standard game elements on top of it. There’s a map, you’re travelling on a journey and you’re collecting things. We’re trying to get the user to forget what the game is about and to just participate in the journey.

How much funding have you raised?

We haven’t raised any money yet, but we received a technological development grant here in Iceland. That was a little over $100,000 per year, for three years.

Will you be raising funding in the future?

We want to do it like in parallel to the soft launch so right now I’m working on going to the conferences. We’re working on the connections, networking and demonstrating our case. The aim is to close a seed round in the fall after the soft launch.

Can you talk about your plans for monetization?

For Box Island, for the soft launch at least, it’s going to be a paid app – so a premium game. What we see is that free-to-play or freemium is dominating the games category, but that’s more for hardcore games or casual games. With the education category, we see that it’s close to 50:50, free-to-play versus premium games. It’s very hard to stick to a business model for such a young a company as ours, so we just have to test it, but we truly believe that premium is the fitting one.

We received a lot feedback from people that believe it’s relevant for Box Island. There's no advertisement or buying something irrelevant in the game.

We hear so many parents talk about how that’s the business model they want to see and that it fits them very well. But what the parent would need to know before buying the game is seeing good ratings, good reviews, and influencers, like educators or the media for example, saying it’s a cool product.

That’s the stamp we need to get to build trust for a premium product in this market and that’s a part of the strategy.

How big is the team at the moment?

We’re four founders, but in total we're 10 people that work on tasks like audio, promotional art, the website and all that stuff. It's difficult because for many other types of companies, a founder can say, 'I’ll do the accounting for now' or 'I’ll just do this for now', but for games it’s hard. I can’t just go and do the sound – it’s never going to work. It’s such an expertise to get the quality up there that it wouldn’t be worth my time to try to do that, so we work with other people for that.

So you’ve been working the Icelandic startup scene for about a year now – how would you characterise it? What are some benefits and challenges?

It’s vibrant. The benefits are that it’s easy to get good connections. There are big companies here and while we don’t have many dozens of them, we do have them. This means with one phone call I can get to a CEO that has been around in the game for 10 to 15 years for advice or feedback. The short connections are great as an advantage.

READ MORE: Impressions of Iceland: A photo essay of the Reykjavik startup scene

Also, Iceland is quite tech-savvy as a country. If you’re targeting the US as a market eventually, I think testing with children here is quite similar as it would be in the US – at least the gaming experience. As a location, we’re kind of in between US and Europe and that’s exactly what the culture is like. This is also an advantage - to use Iceland as a test market for the product-market fit; it’s not too big and not too small for most cases. It’s usually a good start for most of the startups here.

I think especially for gaming companies, but also in general, it's finding the right tech talent. There’s now many more people applying and going into computer science in the universities, but still in terms of game development and designers, you’re fighting with the big guys here. We have Plain Vanilla Games here, the creators of QuizUp, and CCP Games. We’re competing with them, of course, and they already have a lack of talent, so finding the right people can be a challenge.

In terms of the investors, there are new funds here and that’s fantastic, but the funds are here are quite general. Because we’re a small country with a limited number of startups, they want to see everyone.

So we don’t have funds that invest in specific types of companies. But if we go to the Nordic Game conference, you see VCs for gaming there and there may be a VC there that invests in not only just games, but free-to-play hardcore or midcore games – and that’s the only thing they invest in. It’s very specific. We're finding it difficult to get the right advisors and feedback for the market we’re heading in.

What does work/life balance mean to you as an entrepreneur? How do you maintain it?

We’re at the point of a startup lifetime where I believe we should be showing to investors and the community that we’re better than the startup next to us. I truly believe that this is the moment to show you want it more than the startups around you, because there are relatively few VCs and angels, and pretty good startups here.

Right now, we’re really focused on the work thing and not that focused on the life thing, in terms of the balance. We maybe take one day vacation, maybe a Sunday off, but I haven’t been doing that in a while.

Making a game for a new startup and doing that for the first time, well there's just going to be walls that we’re hitting and we just have to work more at this point in time. But we’re learning so much. I don’t know what it’s going to be in three months, whether it’s going to be a better balance, but at the moment, we’re just doing everything we can to fulfill our promise of soft-launching in late July.

The interview has been condensed and edited.

Startup Spotlight: Meet Radiant Games, the Icelandic startup aiming to spark children's interest in coding
Comments
Follow the developments in the technology world. What would you like us to deliver to you?
All

NEXT
Let there be jobs: 47% of entrepreneurs expect to increase their global workforce this year
If you were still in doubt: it's entrepreneurs…
Robin Wauters