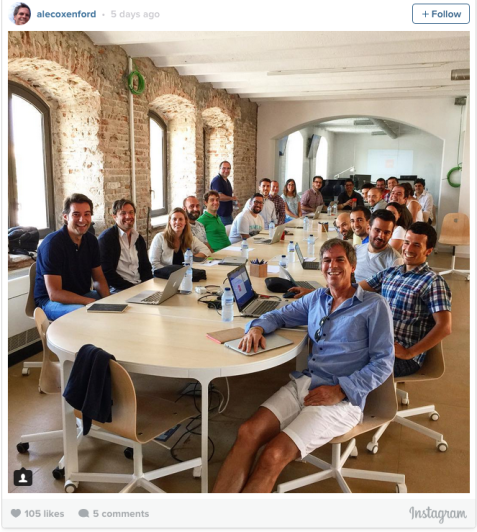 If this continues, Barcelona might soon become one of the main cities in the world when it comes to housing startups that are trying to disrupt the classifieds industry from a mobile point of view.

The new kid on the block is Letgo, a startup co-founded by serial entrepreneur Alec Oxenfordand Jordi Castelló. Both Alec and Jordi come from OLX, the classifieds juggernaut that has more than 240 million users in emerging markets, essentially having become ‘the Craigslist of developing countries’.

As Wallapop, OfferUp and others, Letgo applies a geolocation layer to classifieds and the selling of second-hand goods. The app shows what other people in your surroundings are selling, and then it’s up to the buyer and seller to meet in person to complete the transactions. Letgo doesn’t make any money yet as all transactions are free; the same is the case with Wallapop.

Selltag, based in Madrid, is also a competitor in the space.

While OLX quickly became a giant company in emerging markets, this time Alec Oxenford has new plans for his new venture: the US. “There has been a lack of innovation in the US classifieds space, particularly when it comes to mobile”, he said in a statement. Craigslist and eBay still control the majority of the market and companies like Letgo, Wallapop and others that were born States-side, such as OfferUp, see the US as their biggest market and main opportunity.

Letgo was launched without much fanfare earlier this year and is based in New York City and Barcelona -Ambatana Inc, the company behind the Letgo brand, is registered in Delaware-. Since then the app has been downloaded 2 million times -not that this means much in the world of paid installs and mobile app marketing- and it has quickly attracted the attention of one particular investor: Naspers.

The South African media entity has just invested $100 million in the company, placing Letgo almost on par with Wallapop, who rumours say it has already raised close to $150 million. Startup investing is not new territory for Naspers, as it has previously backed other tech companies such as Tencent, Mail.ru or Alec’s prior venture, OLX.

The company says that it will spend about $75 million in marketing and $25 million in growing its engineering and marketing teams. Letgo currently has 39 employees, with at least half of its staff being in Barcelona.

Besides Jordi Castelló, who has split his time between Barcelona, Buenos Aires and Singapore over the past few years, Letgo is also being led by Carles Grau Molto (CTO), Ricard Coll Fonollosa, Adrià Vallés (formerly of Softonic) or David Wieseneck (VP of Finance, based in NYC and previously of OLX).

Money alone doesn’t create winners or losers, but the mobile classifieds industry is surely heating up and Spanish companies have a lot to say on a global scale.

Wallapop clone and Barcelona-based Letgo raises $100 million from Naspers
Comments
Follow the developments in the technology world. What would you like us to deliver to you?
All

NEXT
The future of tech.eu
When we launched tech.eu in late 2013, we believed there was a huge gap in the reporting on the ongoing development of the European technology…
Robin Wauters