Greece is setting up a new €260 million fund-of-funds. Here's how it will work

All this more or less jump-started with the local VC market being revived in late 2012 with the formation of the so-called “JEREMIE funds”; seed and post-seed funds put together under a scheme of public and private co-financing in a 70/30% ratio.

Under the management of the European Investment Fund-EIF, public financing came from national and EU structural funds (from the national Operational Programme ‘Digital Convergence’ and JEREMIE scheme), while the private financing came from both institutional (mainly banks) and individual private investors.

The JEREMIE funds (Jeremie Openfund II, Piraeus Jeremie Tech Catalyst Fund, Odyssey Jeremie Partners and Elikonos Jeremie SICAR) during their mandate participated alone or along with other Greek and/or international investors in 61 different companies in 93 deals of an accumulated amount of at least €59.02 million. (*preliminary, personally collected data for 2013-2016. Some data are incomplete or some deals may have not been recorded. Rounds raised or announced in US dollars have been converted using the average European Central Bank USD-EUR rate for the month that the funding round was raised or announced. Accumulated amount refers to the total size of rounds one or more JEREMIE fund(s) participated and not to their sole participation in each round).

Despite some criticism on JEREMIE funds’ modus operandi (deal flow, investment criteria, lack of visibility), they have generally been considered as successful by the Greek startup ecosystem, having provided with capital some promising tech companies in and outside of the capital city of Athens and triggering other ‘players’ to get involved and expand the startup and VC ecosystems.

Now the Greek government, with the JEREMIE funds investment period having expired, is seeking to further move forward tech entrepreneurship and funding opportunities for scalable businesses by setting up a new fund-of-funds along with EIF to pour at least €260 million to Greek startups through intermediary VC and PE funds. The EquiFund, as it has been named, was officially signed and announced on December 22nd 2016, by the Minister of Economy and Development, Dimitris Papadimitriou, and the European Investment Bank President, Werner Hoyer, in a press event that was attended by the Greek Prime Minister Alexis Tsipras and the EU Commissioner for Regional Development, Corina Cretu.

At its launch, the EquiFund will be financed with €200 million through the Operational Programme ‘Competitiveness, Entrepreneurship and Innovation 2014-2020’ that is being financed by the Greek Government and the European Structural and Investment Funds, as well as with €60 million by EIF, including up to €10 million from the European Fund for Strategic Investments (‘Juncker Plan’). EIF will also serve as the EquiFund manager, issuing the calls for interest and assessing the intermediary funds that will be set up.

It’s worth noting that EquiFund is a different fund-of-funds from the one announced in November by the European Commission and the EIF that will contribute up to €400 million in funds that will invest across the European Union.

Under each window, a number of independently managed funds will be created that will be co-financed by EquiFund and private investors. The Ministry’s announcement is mentioning a leverage ratio goal of up to 1:10. The expressed goal is for the EquiFund leverage to total €1bn, from the participation of private investors in the ‘sub-funds’ as well as from the participation of other independent investors in the fund-of-funds itself. The Ministry’s announcement is mentioning institutions such as the European Bank for Reconstruction and Development, World Bank and Black Sea Bank. However, there is no official information on any agreement between the Greek government and the aforementioned investors to participate in EquiFund. What the Ministry has revealed though (see image below) is that the European Investment Bank is discussing participating on its own right with another €60mn euros from the ‘Juncker Plan’. 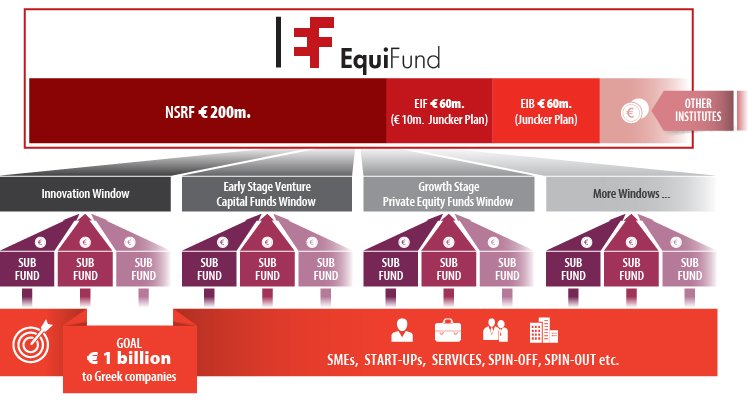 For the “Research and Innovation window”, the goal is for 1-3 funds to be established in two sub-sectors: - Technology Transfer; aiming at projects and companies coming from universities, research centers and other institutions. The “TT Fund” will finance business plans from existing companies, setting up spin-offs and spin-outs, commercial exploitation of patents etc. in pre-seed, proof-of-concept and seed stages. - Acceleration; aiming at projects, teams or startups in incubators, co-working spaces, technology parks and similar structures. The “Acceleration Fund” is set to be eyeing projects and companies in pre-seed, proof-of-concept and seed stages.

For the “General Entrepreneurship window” the goal is for 4-8 funds to be established in two sub-windows (2-4 funds each): - Early Stage Venture Capital; - Growth Stage Private Equity. In both stages, the funds that will be created are set to be investing in any kind of businesses, although the focus will be on strategic economy sectors, ie. tourism, energy, agriculture, gastronomy, environment, logistics, ICT, health and pharmaceuticals, creative industries, culture and materials-construction.

(source: Ministry of Finance and Development of Greece, NSRF, www.espa.gr)

The calls for interest for the intermediary funds have been published already and the most important terms include:

- Deadline for expression of interest submission has been set to March 1st, 2017.

- The combined resources of EquiFund will be allocated as: Up to €80mn to the Technology Transfer and Acceleration funds, up to €100mn to Early Stage funds and up to €80mn to Growth Funds (according to sources this allocation might change down the road, as €180mn to pre-seed, seed and early-stage companies are considered by the local VC market as a lot to drive substantial deal flow. EIF’s call also envisages a possible change in indicative capital allocation to the sub-fund windows).

- EIF might invest also in fund managers from other parts of Europe that will focus on Greek companies (this point is not particularly clear, as it is mentioned on EIF’s EquiFund website, although it isn’t clarified in the calls for interest).

- All funds shall only invest in companies with an establishment or branch in Greece.

- Minimum private participation for each fund has been set to 10% at the fund level for the Technology Transfer and Acceleration funds, 30% for Early Stage funds, and 40% for Growth Stage funds. - Fund manager commitments are set to 1% for Technology Transfer and Acceleration funds and to 2% for Early Stage and Growth Equity funds.

- All new funds will be able to invest in newly-formed companies, or in companies of 7 years old after their first commercial sale, or in companies that are looking to enter a new product or geographical market and their capital needs exceeds 50% of their average annual turnover for the preceding 5 years.

- Typical maximum investment per company for each fund has been set to 15% of the total fund, while initial and follow-on investments shall not exceed €15mn per single investee.

Now that the calls have been published speculation is firing up among the local scene about who will be raising new funds under EquiFund.

After the expiration of the JEREMIE funds investment period in 2016, essentially the only active startup investors are currently the National Bank of Greece through the NBG Business Seeds programme, Quest group of companies through IQbility initiative and VentureFriends, entrepreneur-turned-investor Apostolos Apostolakis-led fund that invested aggressively in 2016 both in greek and international startups.

More silent venture capitals in Greece include independent Fundbox Capital and Charamida Investment Group, part of pharmaceuticals group of companies ELPEN. From the JEREMIE funds, some Openfund partners have publicly commented on wishing to raise new funds but it’s unclear under which management team. Possibly interested in continuing their VC activities should be Odyssey Venture Partners and Elikonos, as well as Attica Bank’s venture capital arm Attica Ventures, which had previously raised public funds under the TANEO fund-of-funds (The New Economy Development Fund, set up in 2002 with co-financing by the Greek Government and EU Regional Development Funds that invested in 11 VC and PE funds). On the other hand, it’s not clear what the intentions of Piraeus Bank Group for a continuation of its own PJ Tech Catalyst Fund might be. Other funds having shown activity in tech companies include private equity Diorama Investments Sicar, whose shareholders include EIF, EBRD and EIB.

It won’t be a surprise, however, to see new ‘players’ attempting to play the VC game under the new EquiFund, as several universities, corporates, angels and former or current entrepreneurs have showcased a substantial activity in startups.

Greece is setting up a new €260 million fund-of-funds. Here's how it will work
Comments
Follow the developments in the technology world. What would you like us to deliver to you?
All