Tech.eu Insights creates insight and guides strategies with its comprehensive content and reports. Browse popular Insights content.
Examine the effects of the latest technology with the Tech.eu lens, see the details and create powerful strategies. Take immediate action to access exclusive articles and reports.
Review Advantageous Packages
Does your company have Insights access? Check it
Features/Profiles
Sponsored by Highland Europe

The results of a recent survey from Highland Europe demonstrates that founders may struggle with adapting to the challenge of scaling their businesses.
Jonathan Keane 08 June 2017
Share
Facebook Twitter Linkedin

Editor’s note: This is a sponsored article, which means it’s independently written by our editorial team but financially supported by another organisation, in this case, Highland Europe. If you would like to learn more about sponsored posts on tech.eu, read this and contact us if you’re interested in partnering with us.

VC firm Highland Europe has published findings from its Scaling Businesses survey, which shows that founders themselves pose the biggest risk to a business’ ability to scale.

Half of the founders surveyed expressed doubts over their ability to manage a company as it scales as well as adapt their strategies for these challenges. Structuring the business was cited as a much bigger hurdle than seeking capital.

The Highland Europe report surveyed 173 European company leaders, two-thirds of whom were founders. The report aimed to uncover the biggest encounters and hurdles for growth for European companies. The survey questioned a wide variety of companies at different stages of their growth, from pre-scale to scaling to successfully scaled. While companies face their fair share of challenges at the very beginning of their journey, the biggest hurdles start to pop up when it comes time to scale. 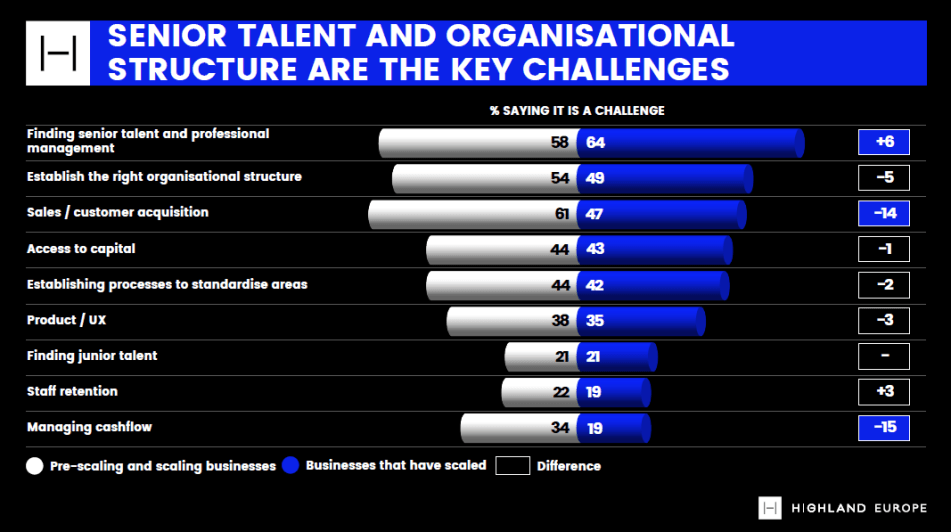 As companies begin to scale, many founders stated that they had concerns over their ability to transition from founder to CEO. Forty-nine percent of businesses said this ability to manage the business during scaling was a significant risk while 47% said the management team needed to be able to execute quickly on strategy changes or risk falling behind.

Businesses at various phases of scaling noted that two of the biggest tests for their growth as sales and customer acquisition (61%) and finding senior talent and managers (58%).

Other major hurdles include: organisational structure (54%), access to funding (44%), and standardising processes in the company (44%).

Meanwhile for companies that have successfully scaled, they found the biggest challenge in securing talent (64%) and establishing organisational structure (49%) rather than sales and customer acquisition (47%). 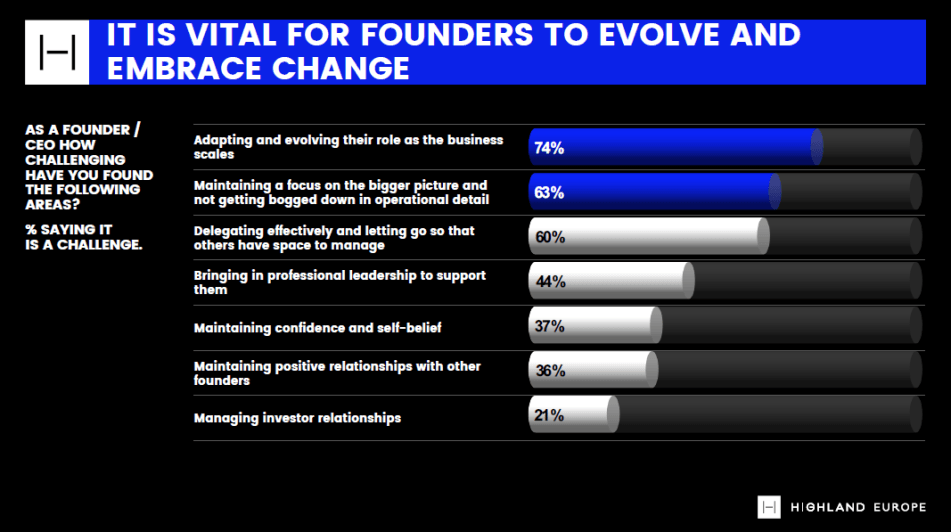 The report added that UK startups are much less confident than European and international startups. Of all the companies surveyed, two-thirds said they believed their companies had unicorn potential (revenues of $1 billion or more) but only 47% of UK businesses had as much confidence in their business. Furthermore, 80% of founders said they were confident in their company’s ability to grow in the country they are based.

The vast majority, 93%, of companies said that it was vital that they grow but only 40% had identified an optimal growth rate and only 62% had regular growth strategy planning exercises. 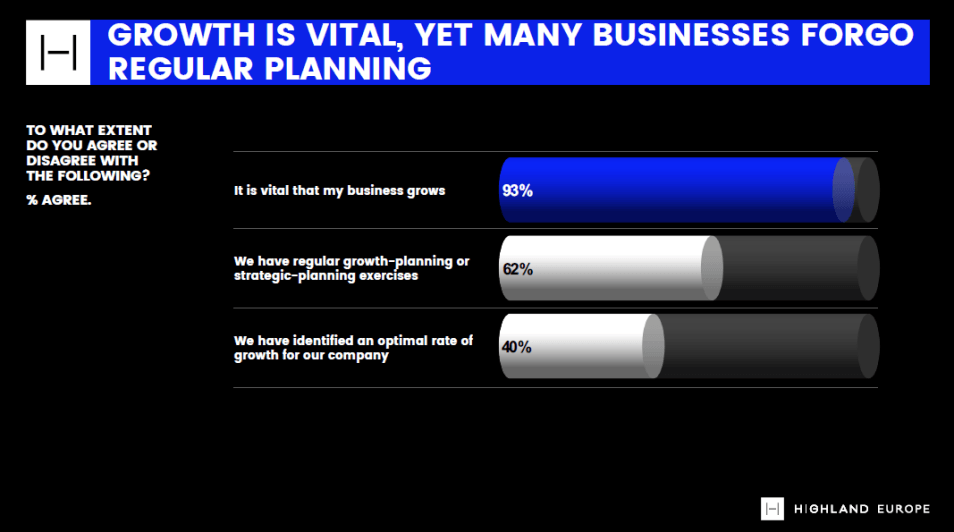 Respondents had a variety of different ways to measure their growth:

“At JUNIQE, we believe in sustainable growth. This means that our focus extends far beyond monthly sales targets. All elements of our daily work are geared towards long-term profitability,” said Lea Lange, managing director of art marketplace, JUNIQE. “In many markets our journey has only just begun and we still see tremendous potential for further growth. It has taken a substantial amount of hard work and dedication to get to where we are today. And we are as excited as ever for the challenges that lie ahead.”

There are a slew of challenges facing scaleups in Europe with pitfalls that founders may not expect, said Tony Zappala, partner at Highland Europe.

“With this research, we see that entrepreneurs and leaders of growing businesses are naturally optimistic, with two-thirds certain that their business has unicorn potential. However they are also aware of the pitfalls - from not being able to maintain their clear vision to being unable to access finance,” he said.

“Interestingly, as a business grows, its major concerns over building sales and customers become slightly less critical. In fact, this research suggests that pre-scaling businesses may overstate the challenge of sales and customer acquisition. As growth continues, increasingly management issues surface, including the ability to hire senior talent and managers.”

Gordon Willoughby, CEO of file transfer service WeTransfer, described the company as being “squarely in the ‘scale-up’ phase” and has experienced much of the organisational infrastructure and capability hurdles cited in the survey.

“Having supportive investors who can contribute to solving these issues through their prior experience or network of business contacts has been incredibly helpful for us,” he added.

Founders’ ability to adapt and manage are the biggest risk to tech startups trying to scale
Comments
Follow the developments in the technology world. What would you like us to deliver to you?
All