2018: Records for the Estonian startup sector + a new wave of entrepreneurs in the community

(Editor's note: This post was syndicated from the Startup Estonia blog, with permission)

In summer 2018, we published our semi-annual statistics (see blogpost) where our seasonal startup entrepreneurs and investors were forecasting a record breaking year for the Estonian startup sector. As forecasted, 2018 brought us many good news, starting from welcoming our newest unicorn Taxify, recognising new young successful startup entrepreneurs as role models (Veriff, eAgronom) and becoming more diverse and stronger in our startup ecosystem than ever before (high growth in foreign talent relocating to Estonia).

To recap the year, we've pulled in interesting analysis about the development of the sector, statistics about biggest employers, investments, employment taxes paid, turnovers and more. In addition to the statistics, we also have comments from seasoned members of Estonian startup scene.

There are currently around 550 startups in Estonia from a variety of sectors ranging from Fintech to Greentech and beyond.

Allan Martinson, CEO of LeapIN, seasoned entrepreneur and investor starts us off:

"2018 was a without a doubt a superb year for Estonian startups in the funding raised as well as overall growth. Tech startups are shifting the direction more and more of the Estonian economy, constituting several percentage points from the whole economy and growing more and more every year. This kind of fast growth is not visible in any other sector."

"Although startups raised more than 320M EUR there was a trend visible - the big startups got even bigger, but the early stage fundraising decreased. This is similar to what is happening in the world in general. Technology sector is leaning towards mature enterprises which might not even be called startups anymore. For me, it would be interesting to see if in 2019 the trend will break and new fresh startups will get investments and increase sales."

"This is definitely needed so that the industry would not tableau. In 2019 the competition for talent will definitely increase. What we are seeing now is just the beginning. The key question will be the sector’s ability to hire from abroad. Already today, every 4th or 5th person is a foreigner. If this trend continues, half the workforce will be from abroad in a couple of years. The salaries are already on the EU level in the technology sector. It is cheaper to hire in Spain, Portugal or Central England than in Estonia."

To start off, we consider it important to define the term “startup” in Estonian economy.

“A start-up is a business unit owned by a company registered in Estonia that is commencing operations and whose goal is to develop and launch an innovative and repeatable business model with great global growth potential and which contributes significantly to the development of the business environment in Estonia.” (Alien's Act) In Estonia, we additionally look at the age of the startup company and typically, a start-up company is not older than 10 years.

The 2018 statistics from the Estonian Tax and Customs Board show that Estonian startups employ 3763 people in their offices in Estonia. In 2017, the same number was 2981, meaning the annual growth was 26%. 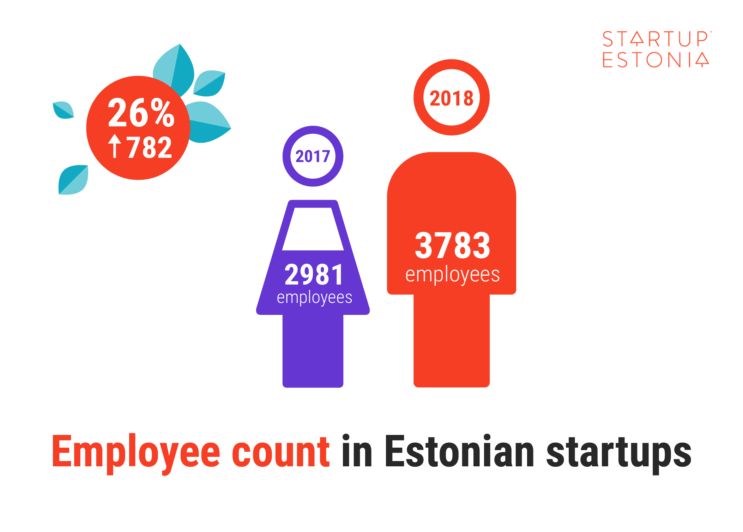 The top 20 startups in Estonia account for an astonishing 62% of the new jobs created by startups in 2018. Transferwise has been the biggest recruiter (+239) followed by Taxify (+92) Monese (+57), Veriff (+54) and Pipedrive (+53). Veriff has shown the biggest increase percentage-wise, with +490% employee growth in their Estonian office. They also just announced this week that they’ve hit the 100 employee mark in all of their offices and that they are looking to add 100 more people in the next 6 months. 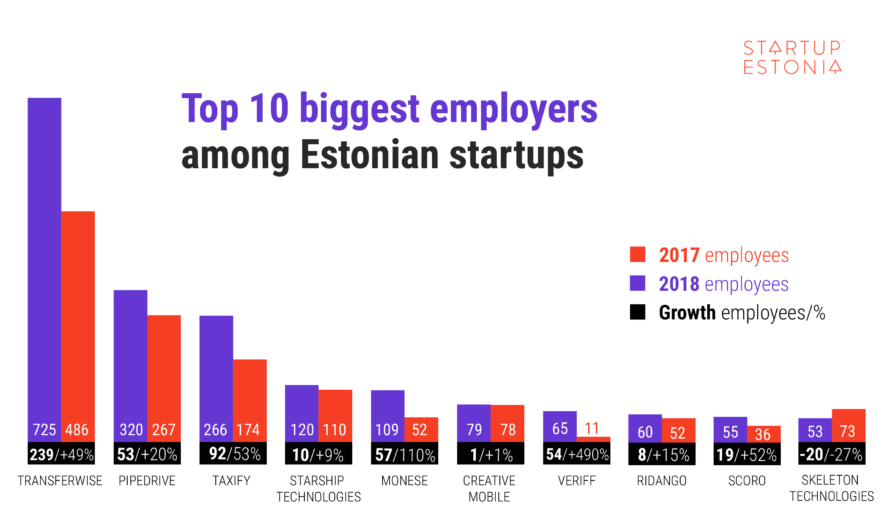 Data collected by the Estonian Startup Leaders Club suggests that startups in Estonia employ 581 people from abroad. Throughout the years, it is estimated, that ¼ of the people working in Estonian startups, are based in their offices outside of Estonia. According to Startup Leaders Club, that number is even higher for 2018, as they counted 2260 people working abroad in their crowdsourced database (this also accounts people working in companies no longer startups by definition - either acquired or companies older than 10 years).

According to the annual “Desirable Employer Survey of 2019” (conducted by CV Keskus), Estonian startups are among the top companies, people would like to work for. Following the already matured technology company Cleveron, second and third place in the category of employers with 50 to 249 employees were taken by Starship Technologies and Veriff. This clearly shows that startups are considered as an attractive work environment among Estonian people.

“In 2018 I saw a big increase of the new wave of Estonian startups. Funding was raised, bigger offices were built and more people were hired. 2019 will be the year of newcomers. Veriff has received a lot of support from #EstonianMafia on our road to success so now we are trying to support the newcomers. I see that the “giving-back mentality” is the key element and that allows us to get even more smart people on board who will allow us to do even bigger things. We will gladly be the first clients to newcomers, test their solutions and help them to get to the big markets,” says Kaarel Kotkas, the co-founder of Veriff. Nordic Business Report positioned Kaarel along with Markus Villig (Taxify) and Timmu Tõke (Wolf3D) among the brightest young entrepreneurs from the Nordics (25 and Under in Northern Europe). 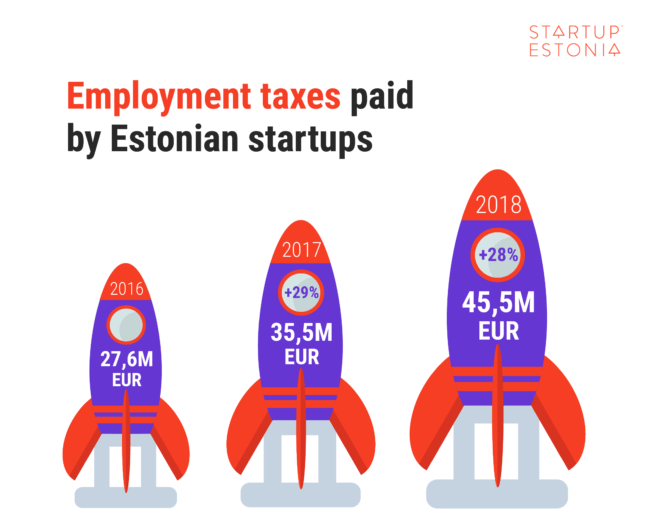 Markus Villig, founder and CEO of Taxify: "2018 was a special year for Taxify – we raised the biggest funding round ever for an Estonian-based tech company and also became the first company to be valued at over $1 billion. This shows to startups and investors that Estonia has reached a stage where companies don’t need to migrate overseas, thanks to the great business environment, supportive government and fast-growing talent pool in Estonia."

He adds: "In 2018, we more than doubled in size as our team grew from 400 to 800 people globally. In 2019, Taxify continues to be one of the fastest growing tech companies in Europe and is constantly looking for top talent. As we focus on the long perspective, we have to take a serious look at Estonian education system to make sure we will have world-class people who graduate Estonian universities also in 5 and 10 years." 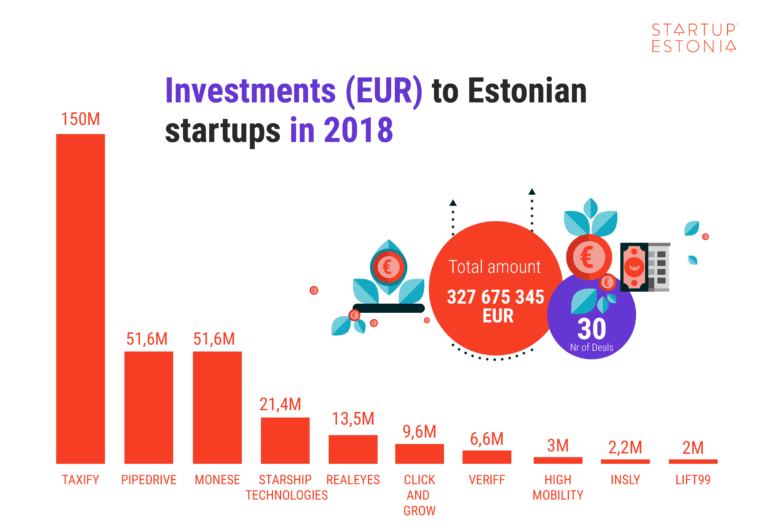 The same trends of number of deals going down but the amount of investments getting higher is seen worldwide. For Europe, we see a sign of maturation given that the number of deals went down significantly. What is also interesting - fintech, medtech/health tech, transportation/mobility and cybersecurity being as the main strongholds in European tech, reflected both in exits and funding numbers. (See the full report on early-stage tech startup activity in Europe). Since 2010 the proportion of investments raised from abroad to Estonian startups have been growing year-by-year, reaching to the highest percentage in 2018 (96,3%). The increased interest of foreign investors confirms that Estonian startups are being noticed globally, we have a strong startup ecosystem and a credible transparent business environment. 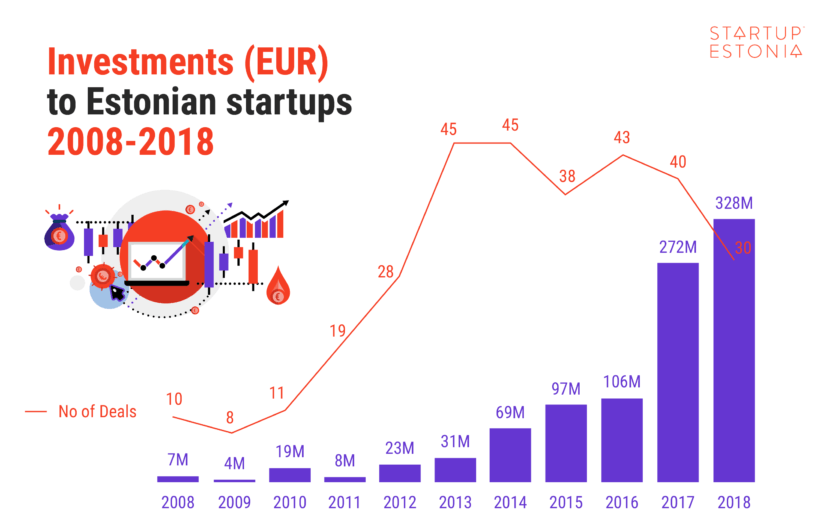 "Capital supply in 2018 was historically the best on Estonian venture capital market – assets under management by Estonian based venture capital funds reached a 150 million EUR milestone and we saw closing of three new funds last year. Most of this capital is yet to be invested and can be seen in the results of upcoming years. This means another significant step forward for our start-up ecosystem and a remarkable leap from Estonian Development Fund in 2008 to local accelerators, and from then on to venture capital funds being raised in Estonia since 2016 when we started seeing supply of institutional capital in early stage investments. As a result, local venture capital financing is diverse and well accessible to start-ups, and complements Estonian start-up environment and founders’ community," says Sille Pettai, the Board Member of Smartcap.

Sille adds: "In 2019, we expect to see new additions to the list of strong venture capital fund managers in Estonia and also second closings of 2018 vintage funds. Therefore we also expect the assets under management by local players to exceed 200 million EUR."

The Estonian startup community is as vibrant as ever. We see more and more community based organisations popping up, renewing their programs or starting something totally new - all of that to support the growth of startup mindset, vertical based startups and/or new technologies. Stay tuned for news about Estonian startup in 2019!

2018: Records for the Estonian startup sector + a new wave of entrepreneurs in the community
Comments
Follow the developments in the technology world. What would you like us to deliver to you?
All