Tech.eu Insights creates insight and guides strategies with its comprehensive content and reports. Browse popular Insights content.
Examine the effects of the latest technology with the Tech.eu lens, see the details and create powerful strategies. Take immediate action to access exclusive articles and reports.
Review Advantageous Packages
Does your company have Insights access? Check it
Profiles

Copenhagen-based Valuer.ai identifies some of Europe's Medtech startups to watch

Last month, when tech.eu was focusing our attention on the latest innovations in European medtech and digital health, I reached out to Valuer.ai to get their take on what startups we should have a look at. Valuer.ai is an intelligent matchmaking platform for corporates, investors, accelerators and startups based in Copenhagen. They help firms discover, analyze and connect with new companies that can help boost their innovation activities. They have curated a list of over 400,000 startups thanks to a network of over 5000 technology scouts working worldwide. Their AI algorithm has made over 650 matches between startups and corporate clients and utilizes over 30,800,000 data points to ensure the best connections. Each day, an average of 250 new companies are added to their platform.

When it came to identifying some of the most interesting medtech companies to watch, Valuer used a combination of their database infused with artificial intelligence matching technology alongside data from external sources (such as Crunchbase and Angel.co) to choose one early stage company from each country. Valuer’s medtech picks, and the full size of the map above, can be found here. While they did not disclose how exactly they came to determine what startups were "top", interestingly, Valuer’s matching technology identified two of the companies that we featured in our Medtech month coverage, Greece’s RT Safe and Bulgaria’s FindMeCure.

How did Valuer get started? 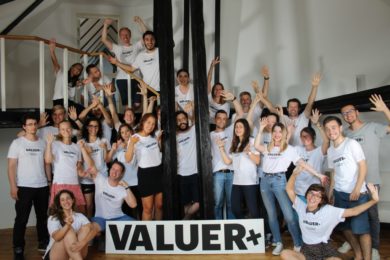 Valuer.ai was first conceived by Daniel Laursen before a startup weekend in 2011. A longtime fixture of Copenhagen’s startup ecosystem, Daniel had started a number of companies including Trendsonline.dk, Startuponline.dk, Startupstamp.com (stepping stone to Valuer) and ecosystem activities, co-founding TechBBQ, NordicGameBits, and NordicStartupBits. Through his work, Daniel knew there needed to be a better way to match startups and corporates. At the time, the market wasn’t quite yet ready for the Valuer.ai concept. He held on to the idea, and by 2016, Daniel felt the timing was right. Looking for co-founders, Daniel sent out a Linkedin message about the project, which put him in touch with Dennis Poulsen, a serial entrepreneur and product manager. Over coffee, Dennis and Daniel found that they had shared visions about the project, and Dennis agreed to join after that meeting. The entire team came together in 2017 when Co-Founder René Giese joined the project after connecting with Daniel at an IoT event in Copenhagen. An experienced leader in Digital IT Solutions, René had experienced many of the pain points that Valuer aimed to solve in his corporate roles, and found Valuer to be an ideal solution.

After raising angel funding, the company has grown organically off revenue. As Co-Founder Daniel Laursen explains, “All three co-founders have a commercial mindset and the focus from day one have been to bring on clients to the platform. We succeed with this and used the first customers to create the product and change the focus a bit. After we had brought on the first few clients on to the platform it was easier to raise more.”

Today, Valuer has a staff of over 80 people from all over the world and their product is used by a number of clients including Microsoft, BMW, Grunfos, Danske Bank, Nilfisk, and others.

Valuer.ai also appeared in tech.eu's Seed the Future report, featuring stories and analysis on the journey of early-stage companies across Europe. In case you missed it, you can pick up the report for free here.

Copenhagen-based Valuer.ai identifies some of Europe's Medtech startups to watch
Comments
Follow the developments in the technology world. What would you like us to deliver to you?
All