Why your headshots and PR photos suck, and how to fix it

I see a lot, and I do mean a LOT of really, really bad photos attached to some really interesting news, which, quite frankly, kills the buzz. Here's how you fix it.
Dan Taylor 06 July 2021
Share
Facebook Twitter Linkedin

In my role as Managing Editor at Tech.eu, I sift through anywhere between 25 to 30 press releases a day and pick and choose what I believe will bring you, dear reader, the most value. In so much, I also receive a lot of really, really bad photos.

Now, most of you might know me as a writer, but did you know that prior to joining the good ship Tech.eu, I spent almost a decade documenting the startup world through event and headshot/portrait photography?

If a picture truly does say a thousand words, and you’re putting crap imagery out in the world, what does that say about your startup, product, fund? Exactly.

Let me help you fix that.

Note: No malice is intended. These are just my opinions and advice garnered from 10,000+ hours of shooting, editing, re-editing, and honing a craft. I could be completely full of shit. But I doubt it.

Why your photos suck

Let’s get something straight right outta the box - there’s a very slim chance that your friend, co-founder, or mum has a reasonably good concept of visual composition. I’ve seen imagery arrive from some professional photographers where I’ve had to ask myself the, “Am I the asshole?” question. A few months back I created a Telegram group of some of my favourite colleagues where we regularly check each other’s pulse. 92.8% of the time, I am not the asshole.

The biggest advice I can offer when you’re preparing your publicity photos: Hire a professional. And hire a good one. Talk to your colleagues, talk to your investors, talk to journalists and PR pros that have great images. Hell, talk to me, we'll point you to the right people.

If you think you can’t afford a pro, ask yourself this one simple question, “Can you afford not to?”

This is perhaps the biggest offender that I see time and time again. For the purposes of this illustration, I'm going to push things a bit, but trust me when I say this; I've seen images very similar to this pass my desk on a number of occasions.

Here's a shot I produced with the one and only Colette Ballou of Ballou PR. 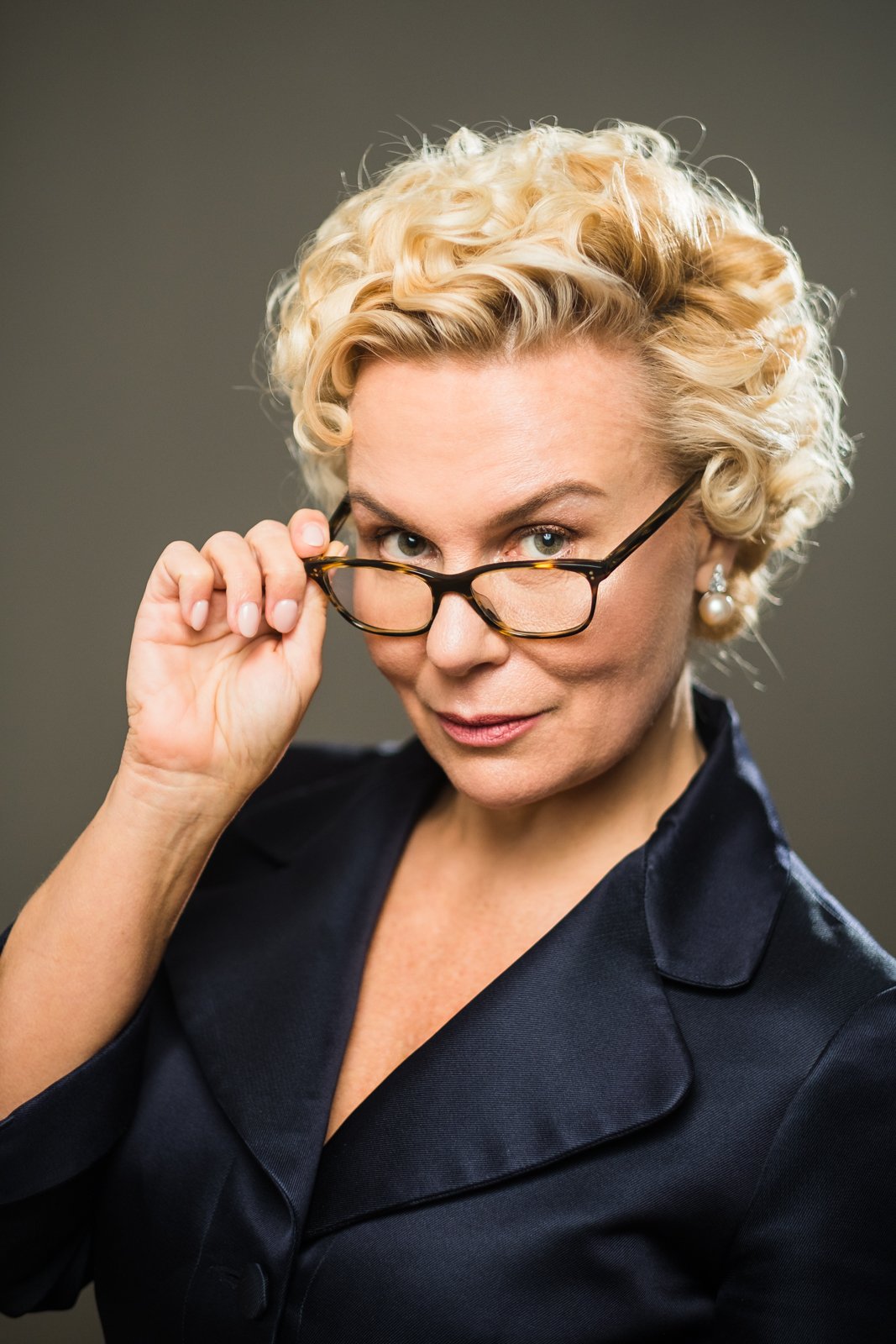 Nothing wrong here, right? Mmmm ... yes. Yes, there is a LOT wrong here.

Now let me show you what proper colour balancing looks like. 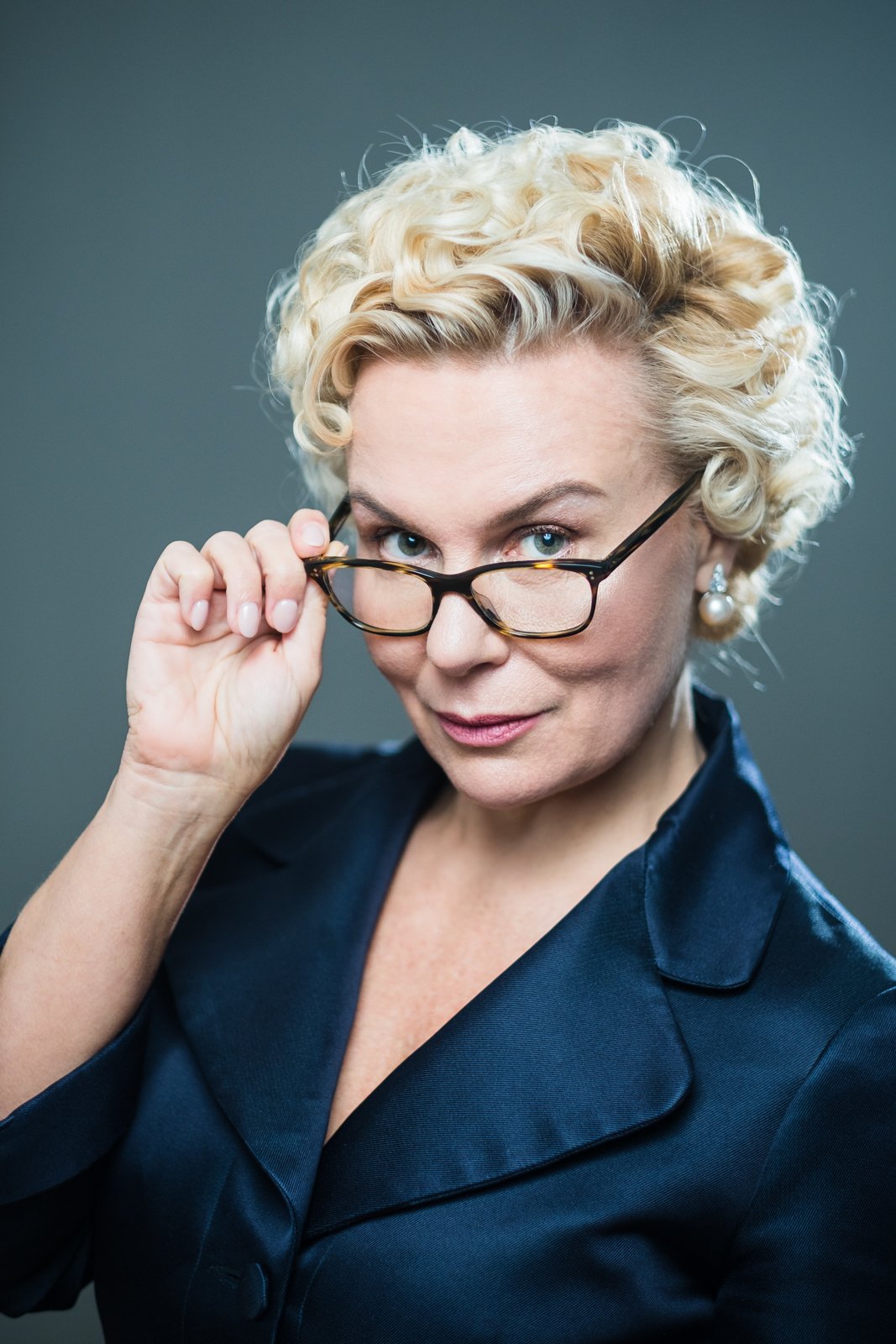 Et voilà! We went from a heady shade of Oompa Loompa orange to much more natural skin tones. Total time to correct this fail in photoshop? 2.38 seconds.

And speaking of photoshop ... 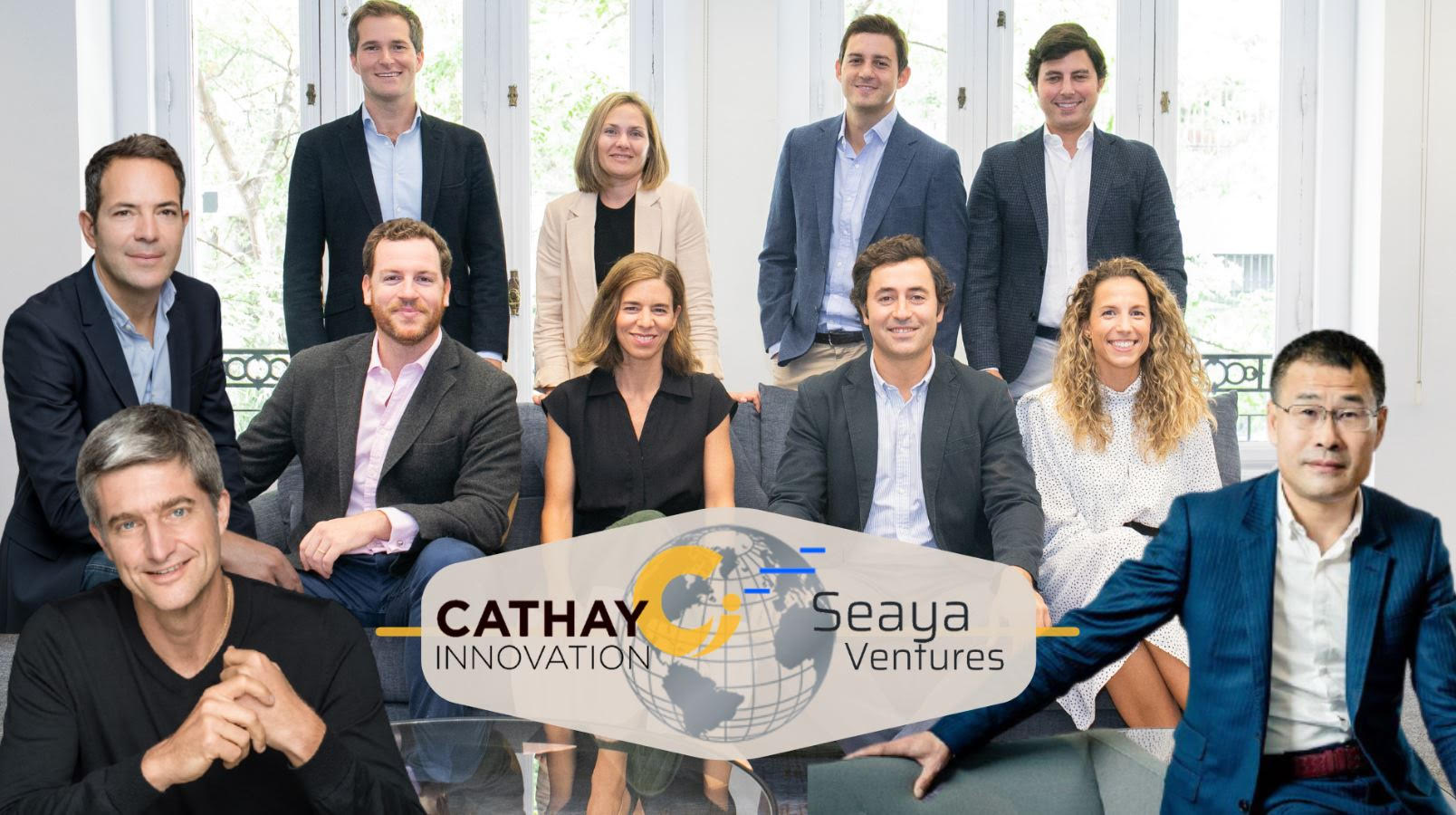 I understand that sometimes not everyone can be there for the group picture. And that’s fine. But for the love of God, do NOT photoshop them in. Bottom left, “Where exactly is this guy sitting?” Just above him, “Whoa! We’ve got a giant here. Why is he so much bigger than the others?” Far-right, “Man, that’s a really awkward place to put a couch.”

Will your average reader actively notice things like this? Probably not. Robin didn’t see it at first, but the minute I pointed it out to him, we had a good laugh.

I’m honestly hard-pressed to pull an image from my archives to demonstrate because I’ve simply never done it. Ever.

The greatest lesson that’s served me in photography and life: When in doubt, leave it out. 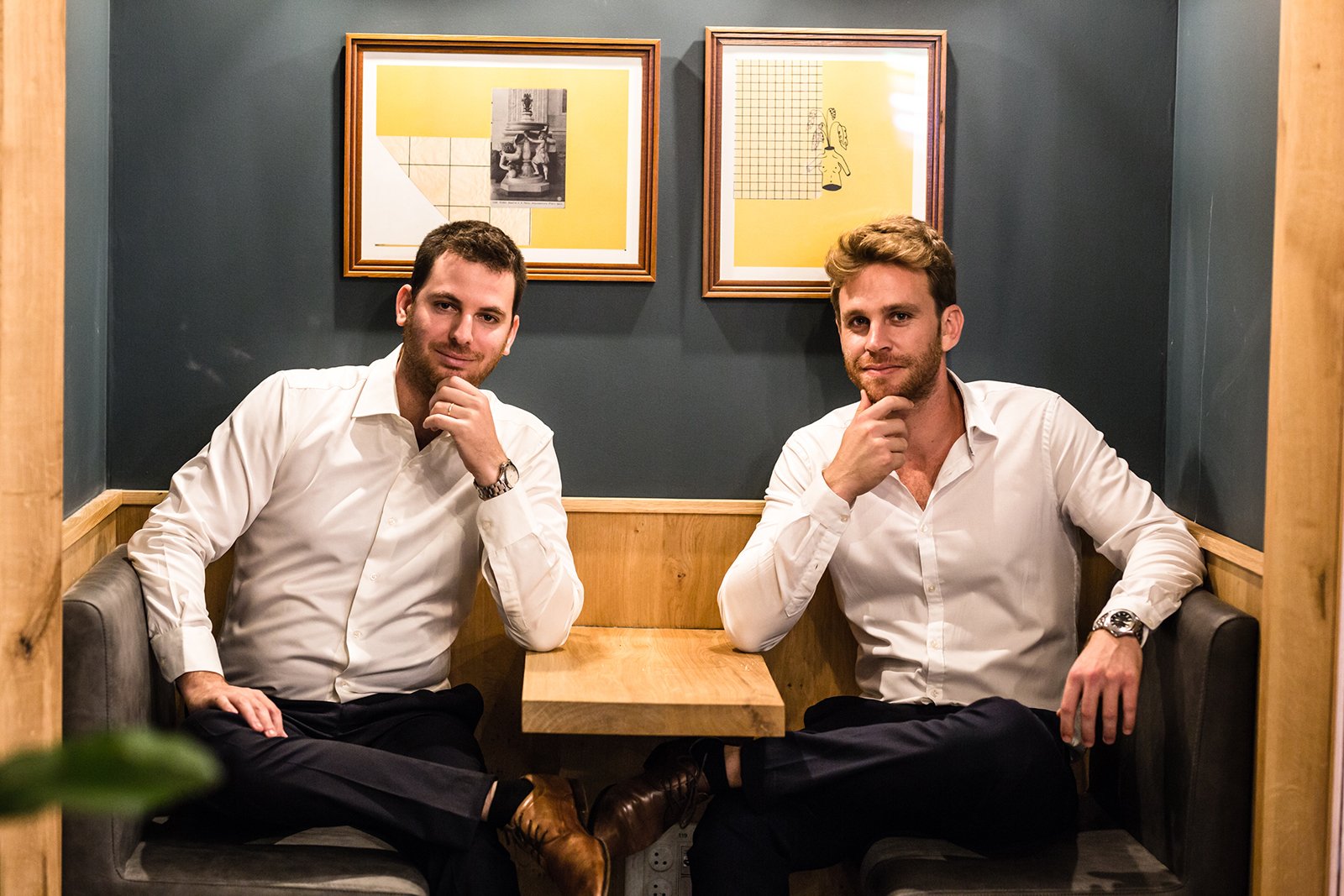 What the actual hell is going on here? Are these guys on a boat? Can we get a structural engineer in here to have a look at this? ASAP, please? Oh, and could no one move that plant?

Let's set that leaning tower of whoknowswhere upright. While I'm at it, let's ditch the Oompa Loompa look as well. The plant did not want to cooperate. 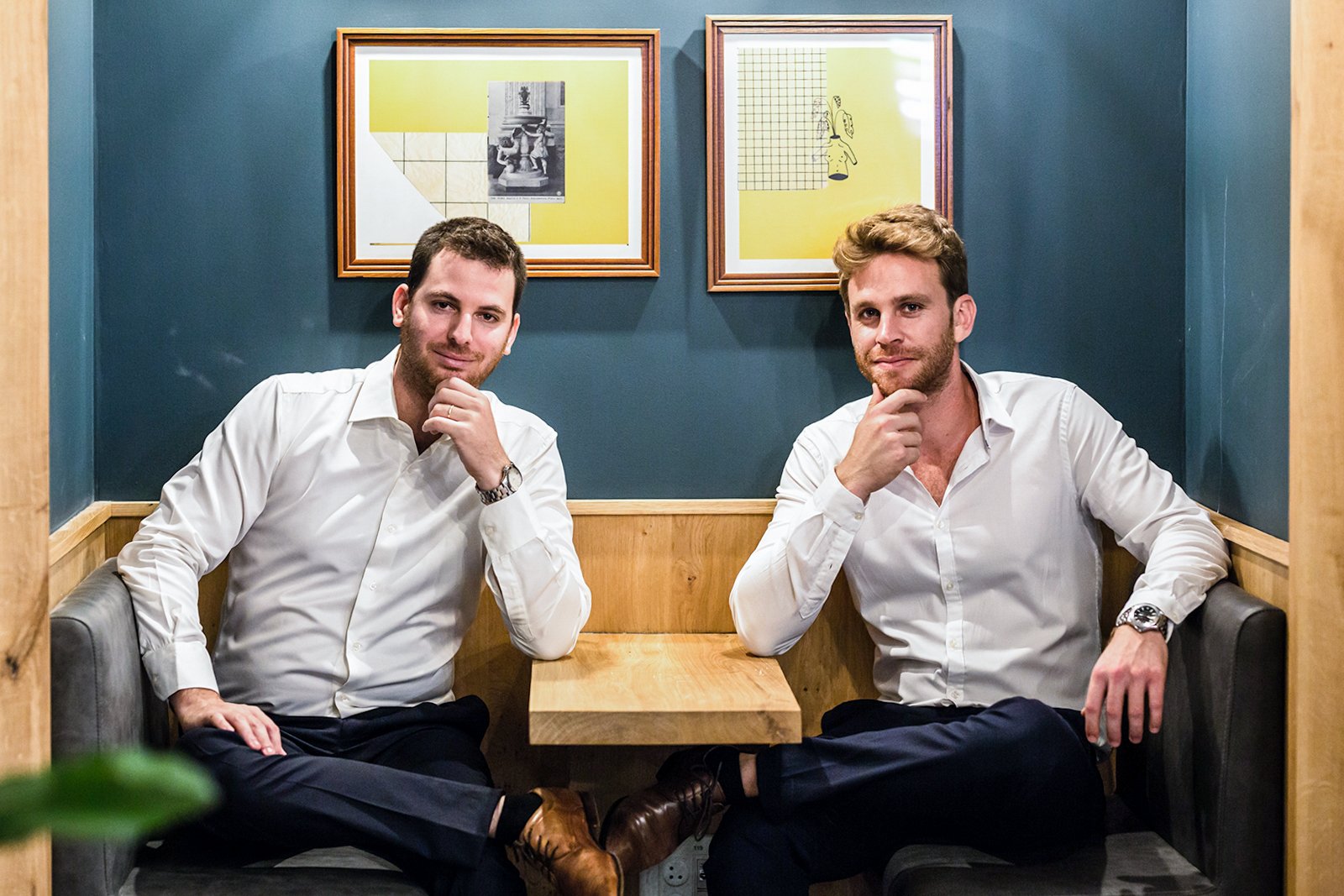 I can't believe I even have to bring this up, but make sure the image is in focus. This was Pale Blue Dot's announcement of closing an €87 million fund. Let's leave the overly used "jump shot" out of the picture for a second. (Please, STOP THIS). 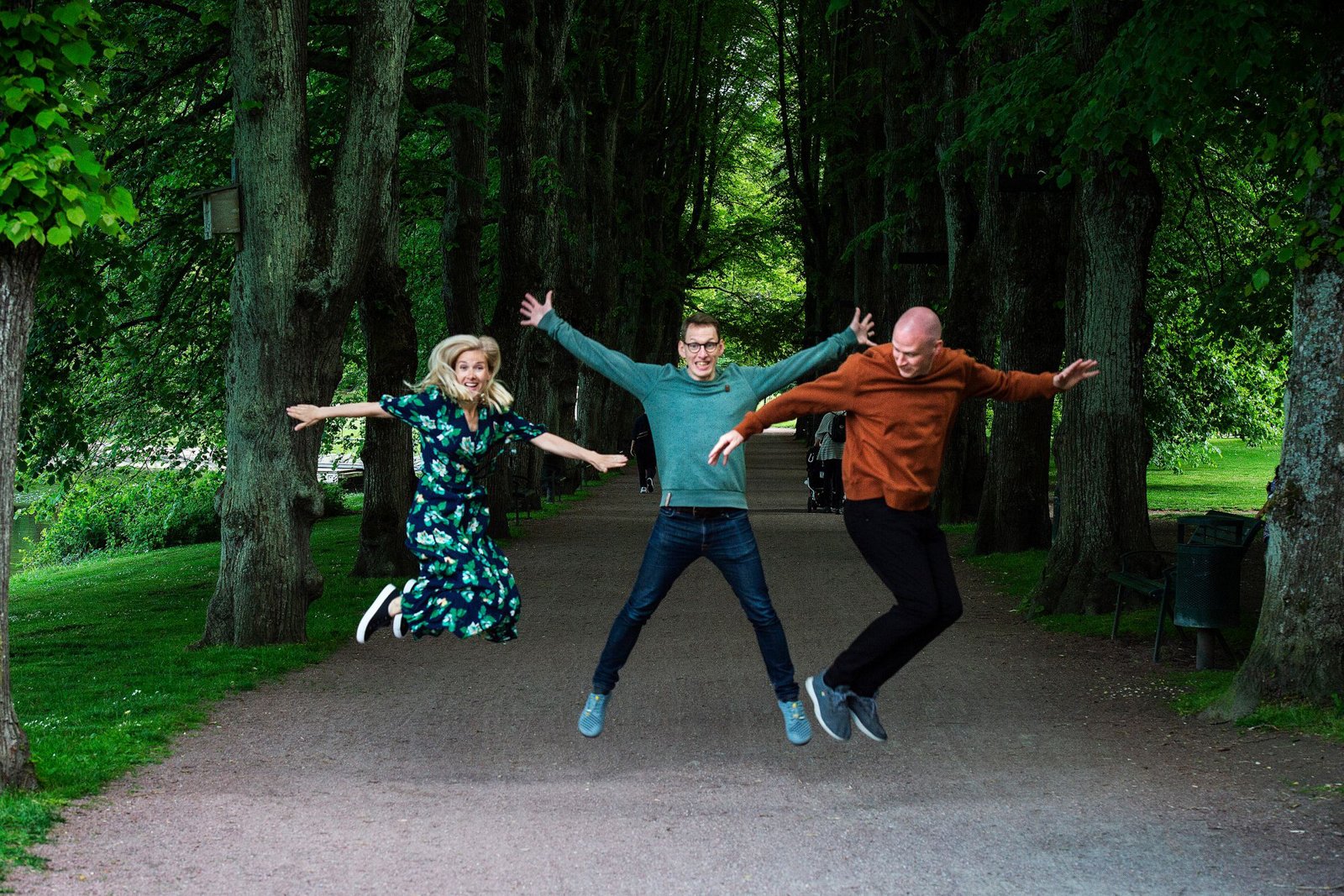 Fine and dandy, right? Let's have a closer look at that. 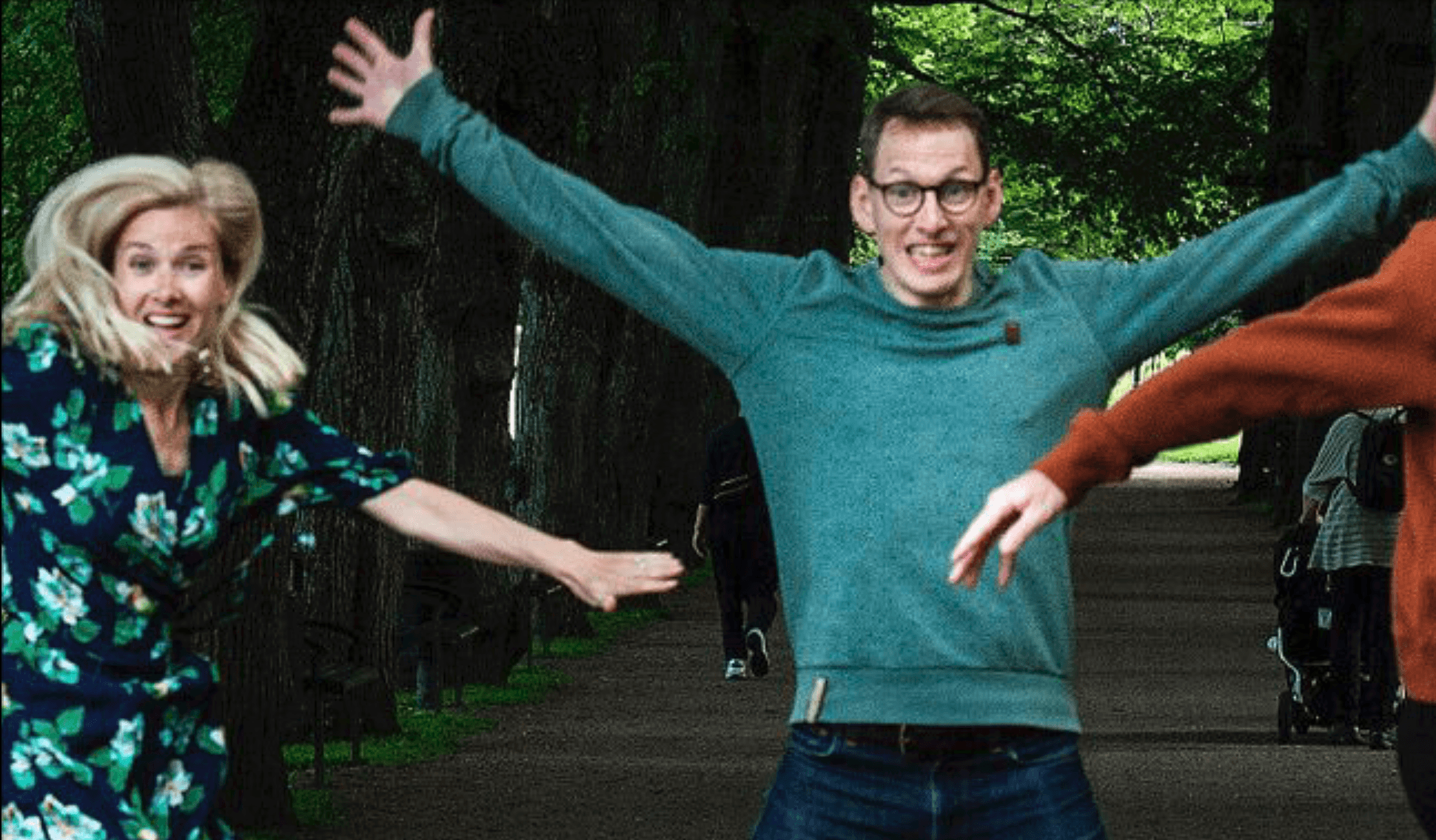 Notice that the walkers and the trees in the background are in focus and yet our three subjects are quite clearly out of focus? Success is about details.

And speaking of details ...

Similar to levels and perspective, paying attention to the background can be just as important as you the subject.

Here we’ve got a shot of Anton Soulier from Taster. This is the shot that accompanied a $37 million funding round. Taster runs a collective of digital restaurant brands. On the surface, founder, kitchen, all good right? 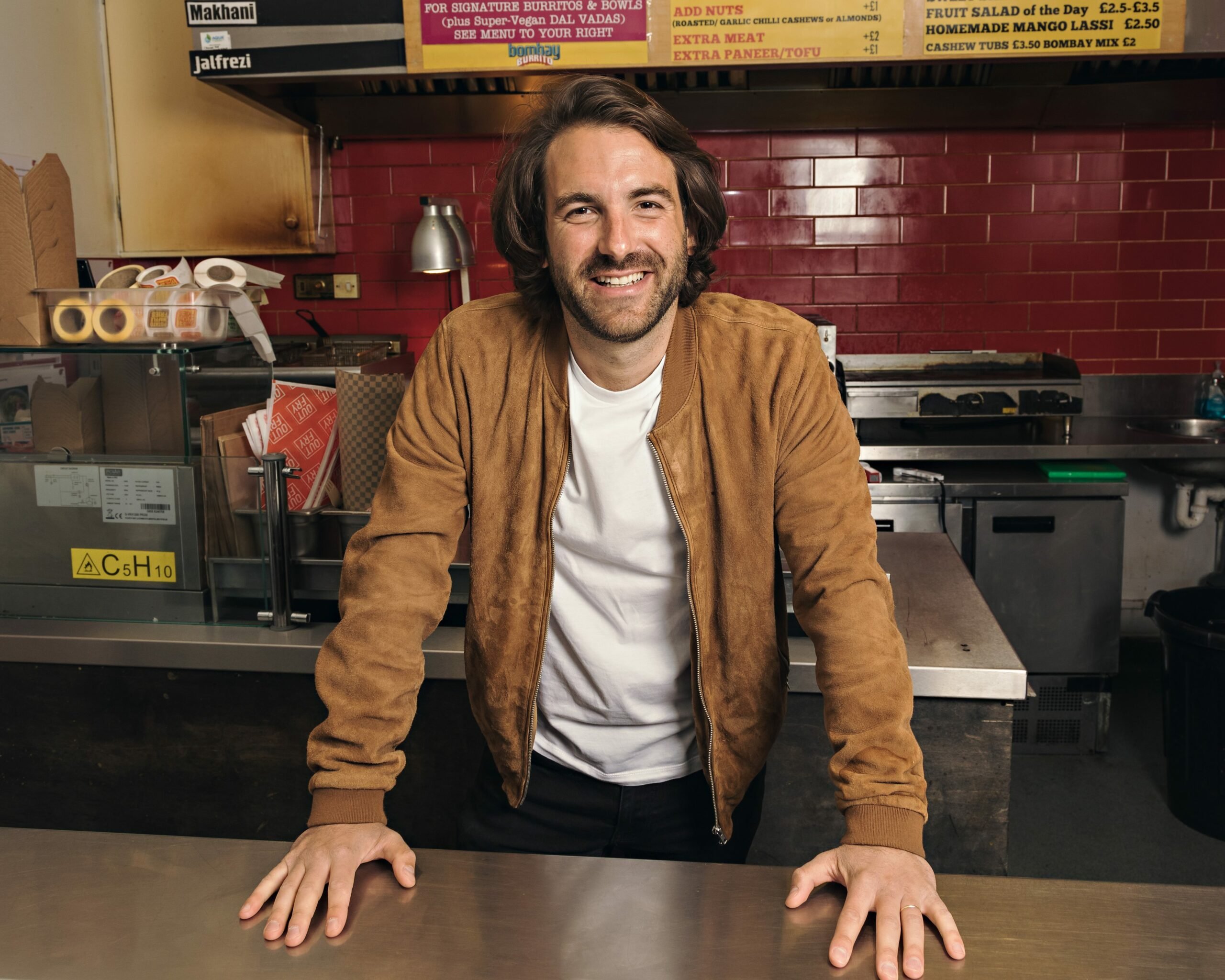 Remember that Telegram group I mentioned above? This is one of the best replies I’ve ever had to my question. 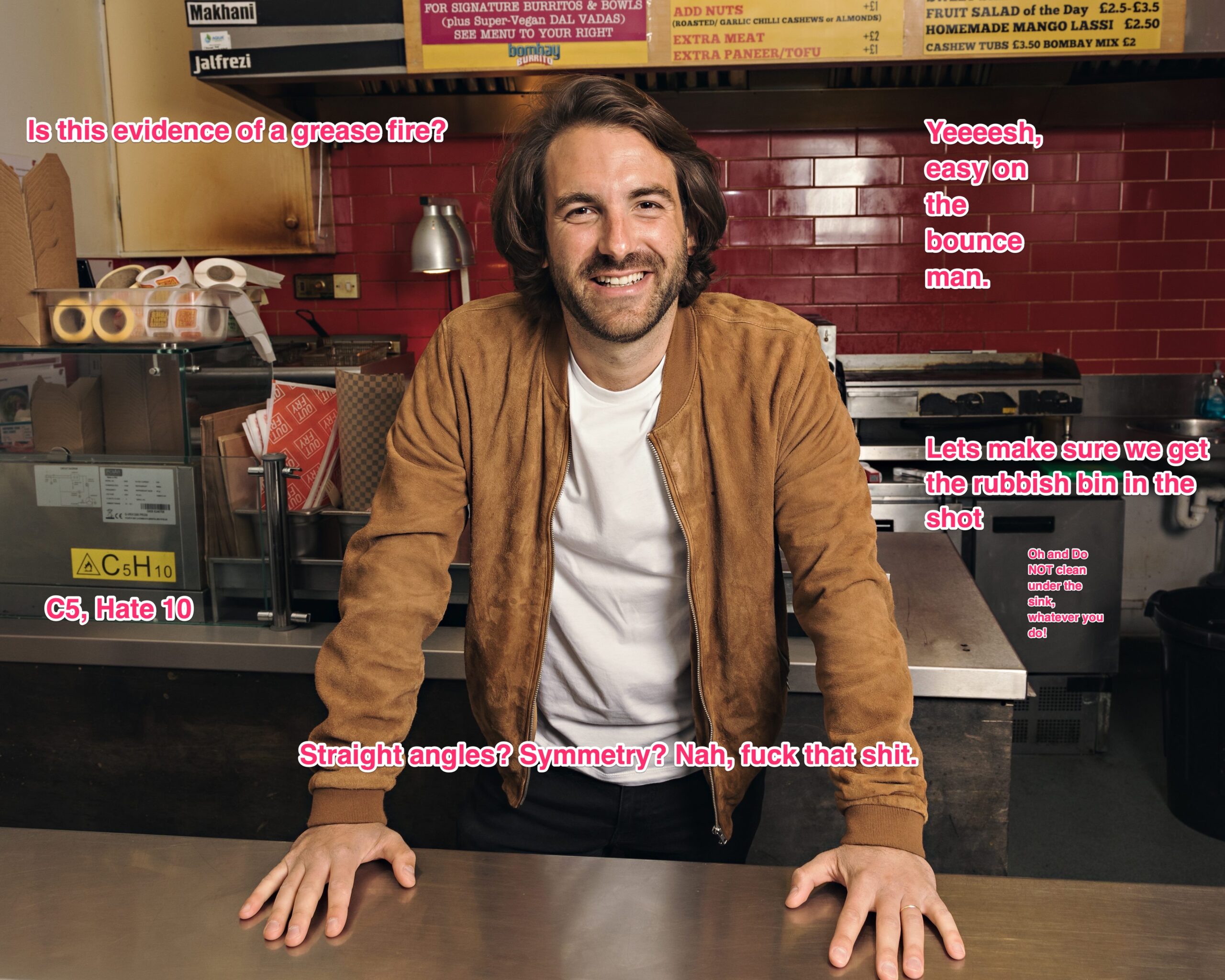 Albert Watson and Steve Jobs collaborated to create one of the most iconic tech industry images ever. In 20 minutes, nonetheless. You and your photographer are not Steve Jobs and Albert Watson. Do not even try.

Because if you do, each and every single viewer of that image is going to think, “Oh, it’s ‘the Steve Jobs’. Wait, this company is nowhere even close to Apple.” Do not be that company.

When I shot this image of Women in Tech podcaster and "Girl who Gets it Done", Espree Devora, we were fooling around in my studio and I was wearing the t-shirt you see pictured here. She commented on how rad it was, and I literally gave her the shirt off my back.

When I saw it on her, the nerd glasses came to mind immediately, and I asked her to put them on. She wasn’t completely sold, so I asked her to look up at the light source. 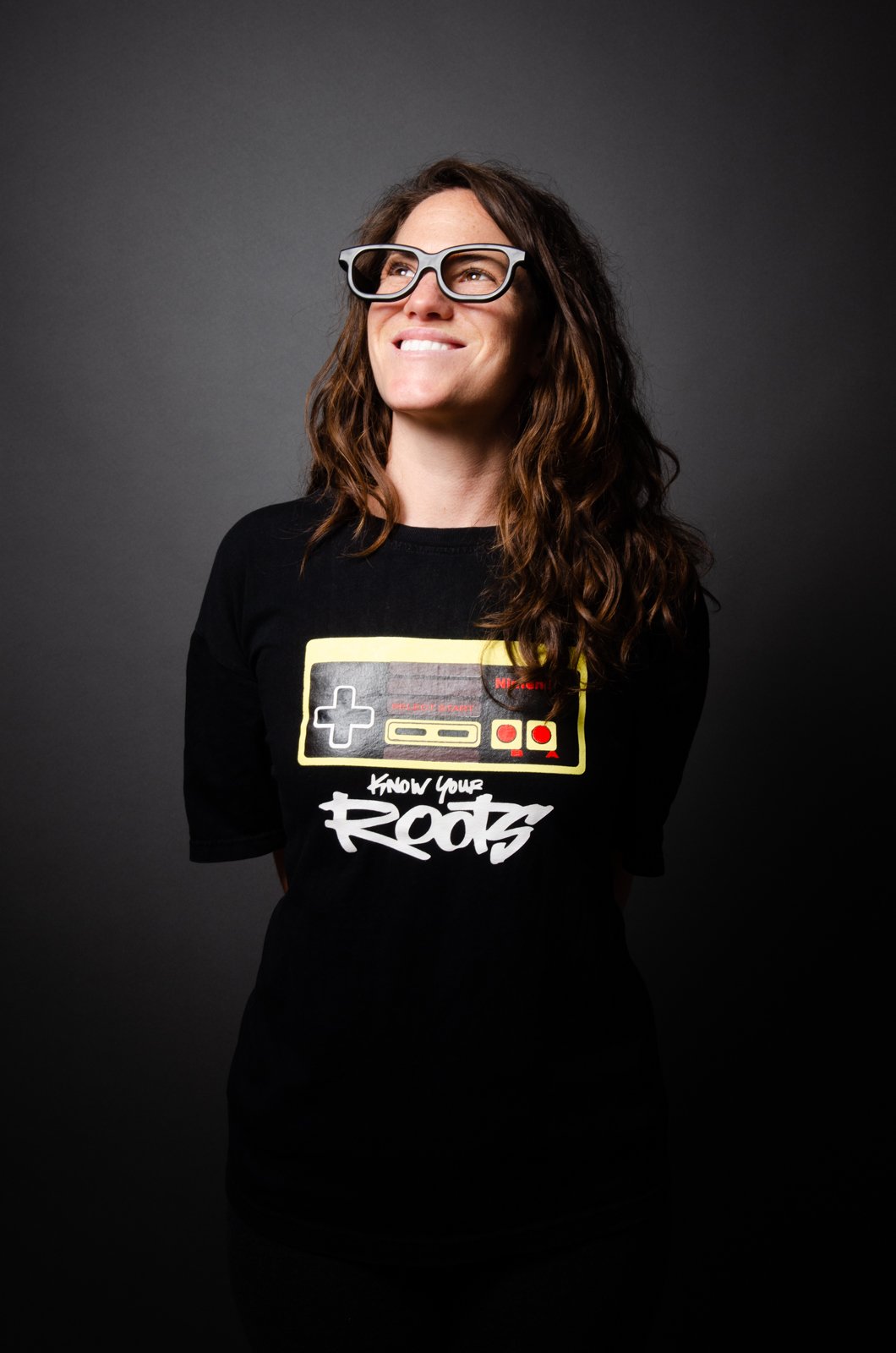 Some 8 years later, she still tells me that it is one of her favourite images of all time. And apparently, Clubhouse agreed. 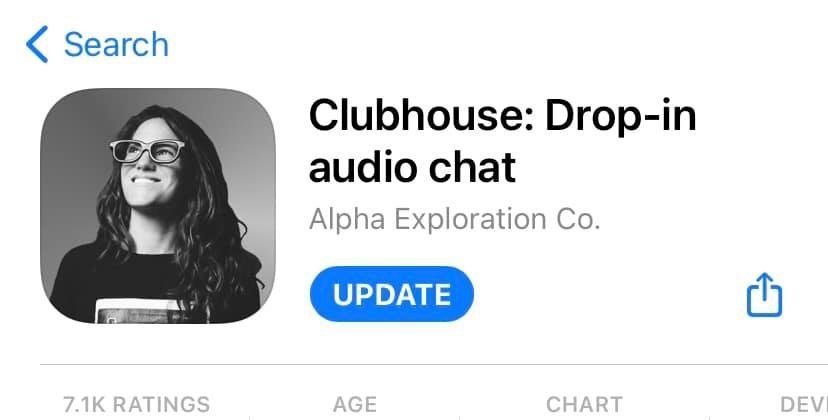 Boris Veldhuijzen van Zanten and I have worked together a number of times via TNW’s events. One memorable afternoon in New York City, I had shot what I needed to on stage, and Boris and I were standing around backstage having a laugh when I said to him, “Hey Boris, let’s make some art?” 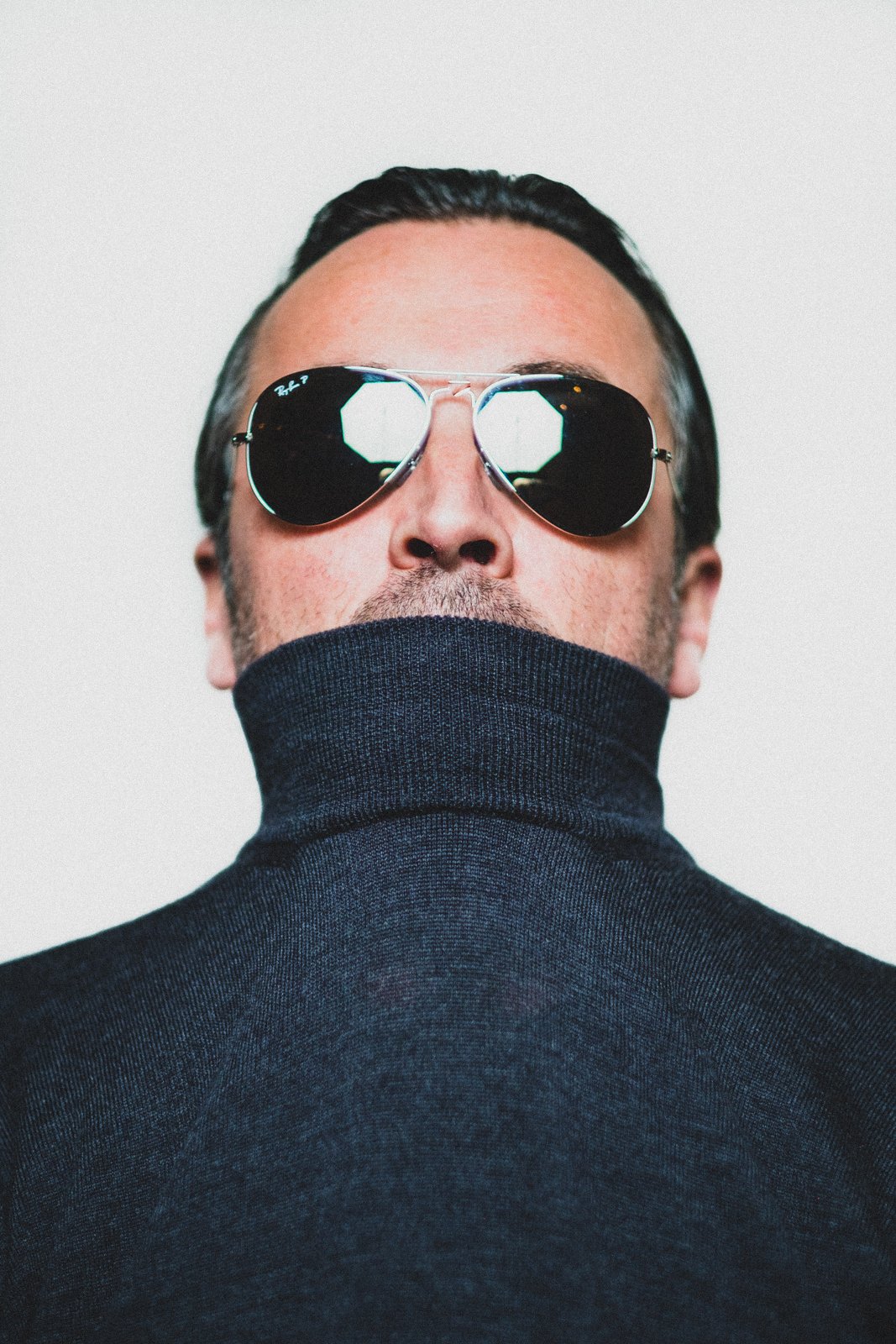 I knew I had a big light source and wanted to play with it. The best way? Hand Boris my mirrored aviator sunglasses and let the light do the talking. Never one to remain normal, he pulled his jumper up over his mouth, and, the rest is history.

“Halfway through a very stressful event we organized in NY, @sensorpunk dragged me into his photo studio. I was not in the mood, but he insisted and I’m still grateful he did,” - @Boris

Bonus Material: In January of this year, Cologne-based SoSafe announced that it had raised $73 million in a Series B round (good), but distributed a rather dreadful-looking image of its founders to the media (bad). 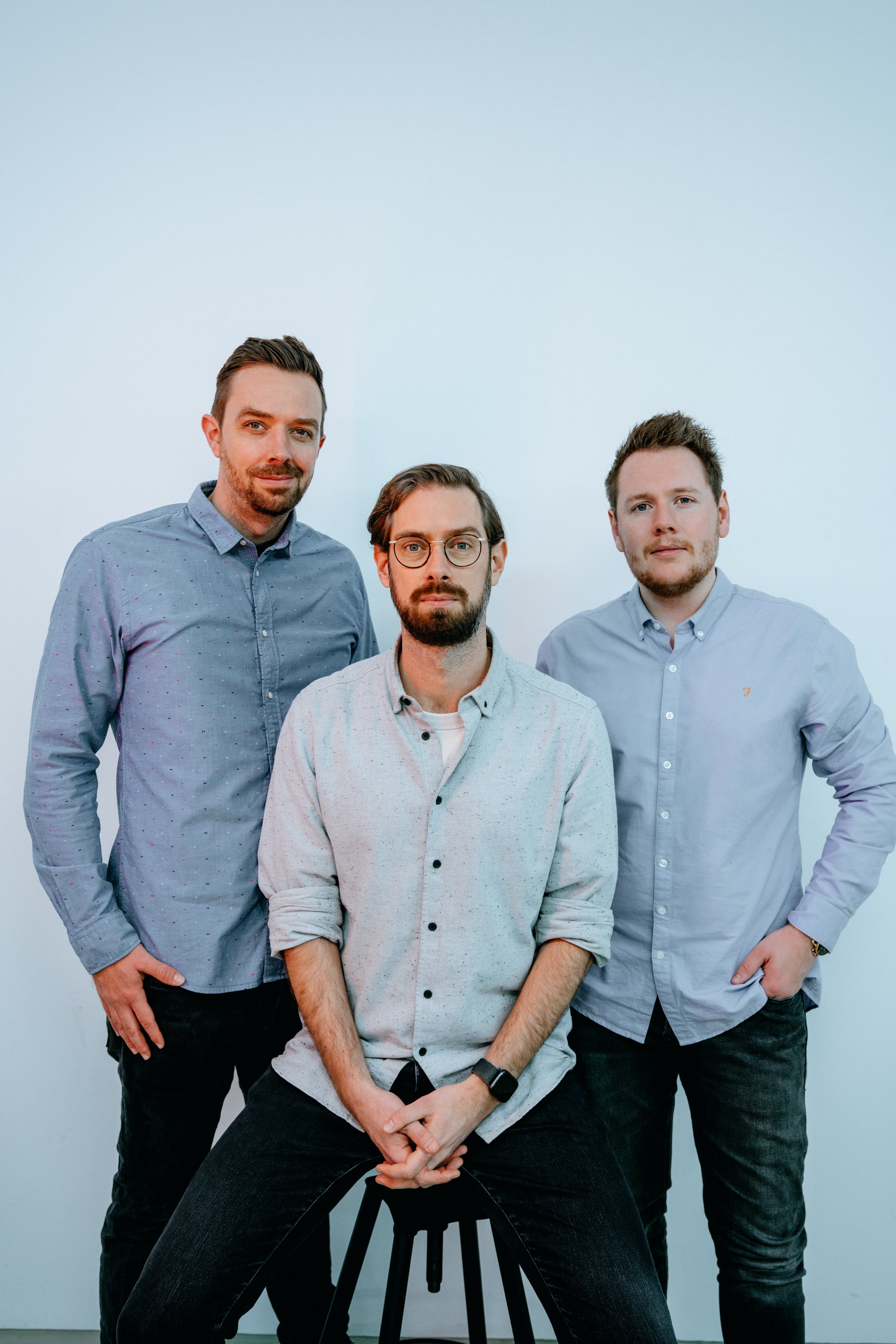 Herr Butcher saw the same thing I did, and took to Twitter to ask, effectively, "Can we try a little harder on the founder photos? PLEASE?" After a series of hilarious comments and suggestions, my humble offering was, "SoSafeWerk?" clearly referencing Germany's electro-pioneers Kraftwerk. 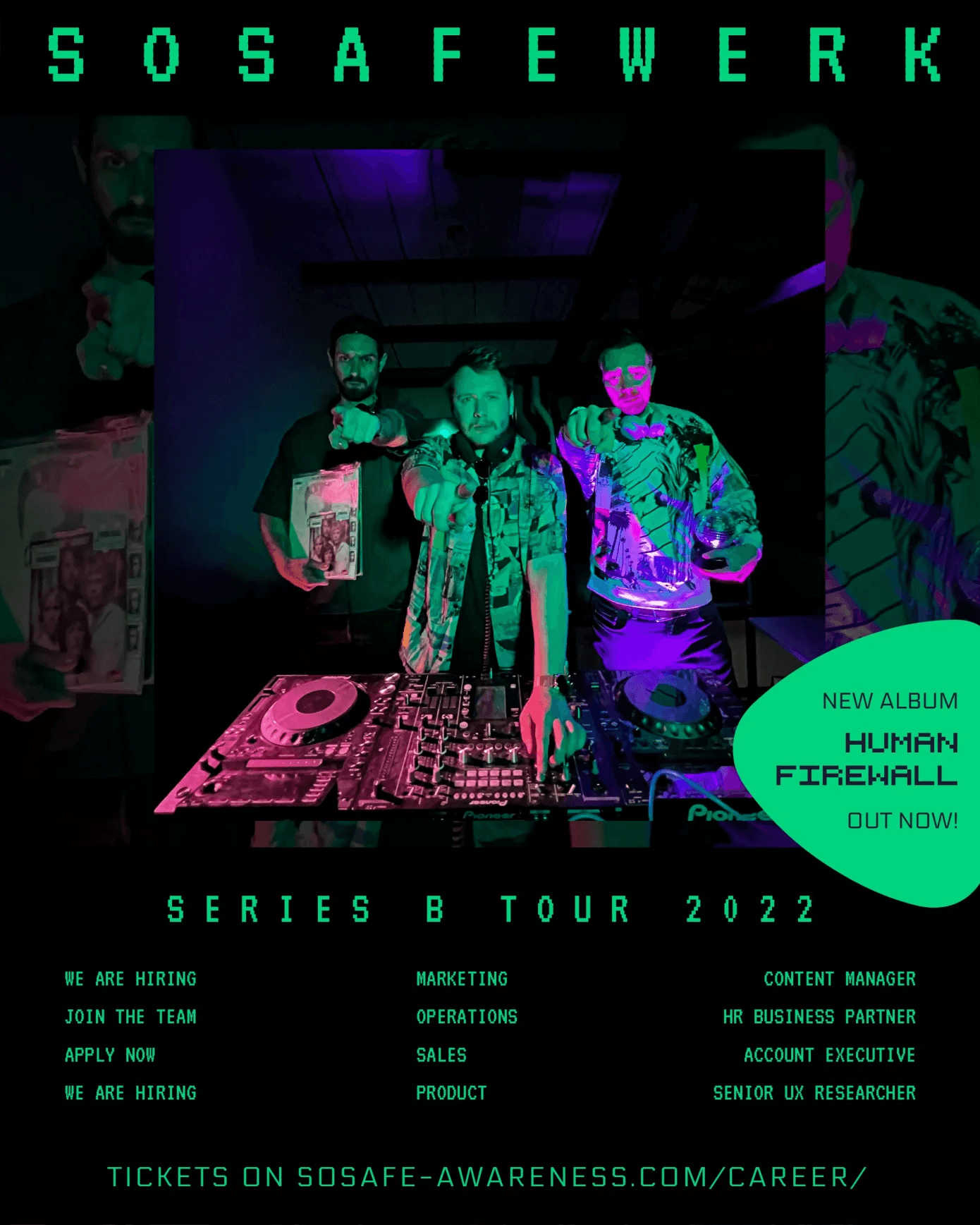 Not only is this one of the best founders' photos I've ever seen, but it's also the ONLY founders' photo I've ever talked about months and months later. My only regret is that I didn't have the honour of collaborating with the SoSafe founders on its creation.

If you've ever met Barbara Belvisi from Interstellar Lab, you know what a powerhouse she is. So why not show it? Be the boss. Own it. 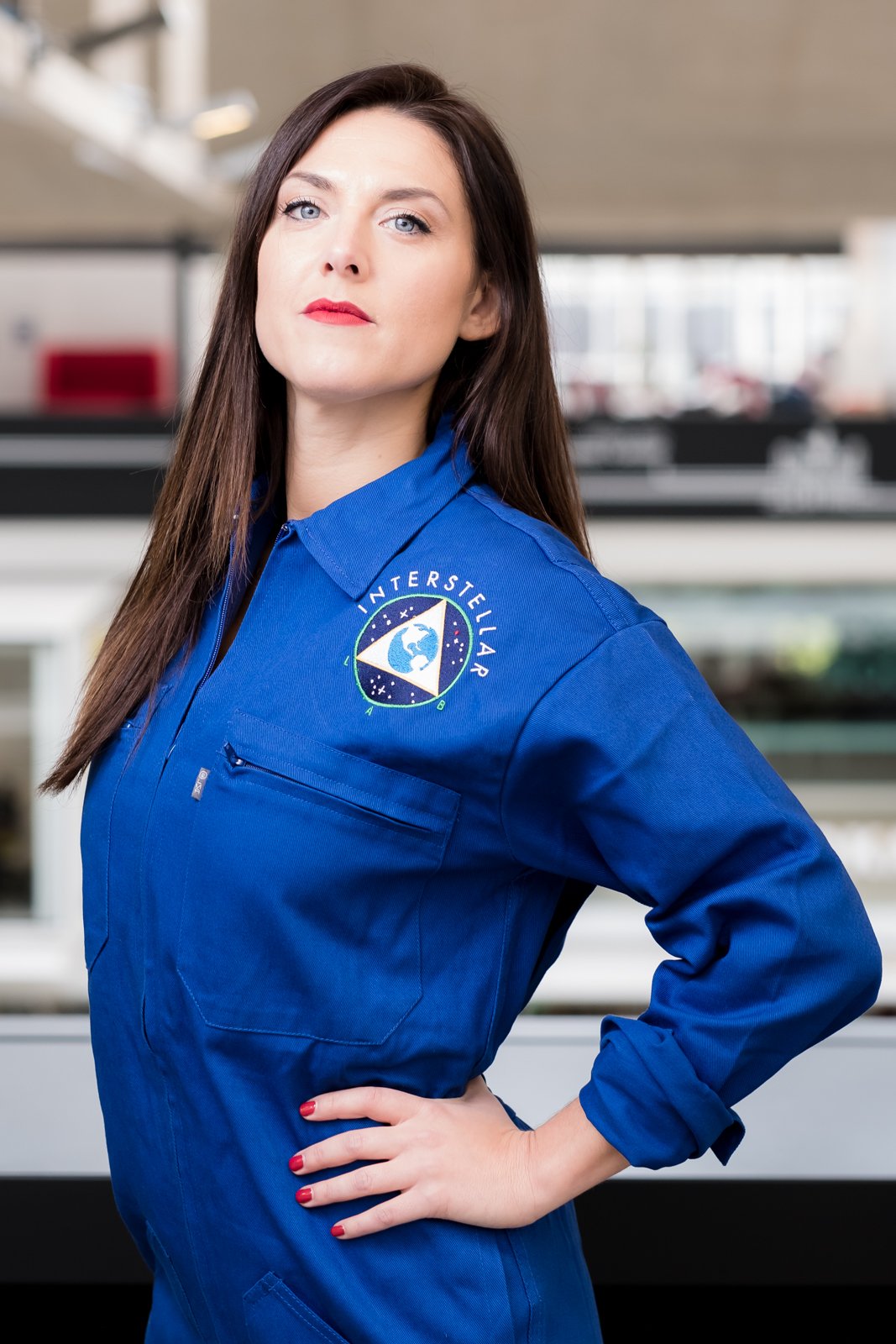 I have to admit, it didn't take much coaching to get Barbara to this pose, but we did do a few minor tweaks. "Gimme a hand on that hip. Turn the body a bit more towards me, I want to be able to see that logo. Lift that chin up just a bit? There! Do. Not. Move."

Ever notice the shockingly high amount of raised chins on hip hop album covers? There's a reason for this. These artists are projecting an air of authority. They are owning their product, their brand, and their image. Why is your offering any different?

Be the fucking boss!

Photography is the art of crafting with light. I can take a subject, have them sit on a chair and give you three different stories with three different lighting scenarios.

Playing with light is one of the most interesting aspects of photography and can really help your shots stand out from the crowd.

When I shot this iconic image of TechCrunch's Mike Butcher, we did this in a nightclub in Istanbul at 3 in the morning. I spotted a wall bathed in blue light, grabbed my camera, one flash, and a softbox. I can vividly remember Mike saying, “Oh yeah, I’m a newsman. Let’s get that classic newsman vibe, but updated.” 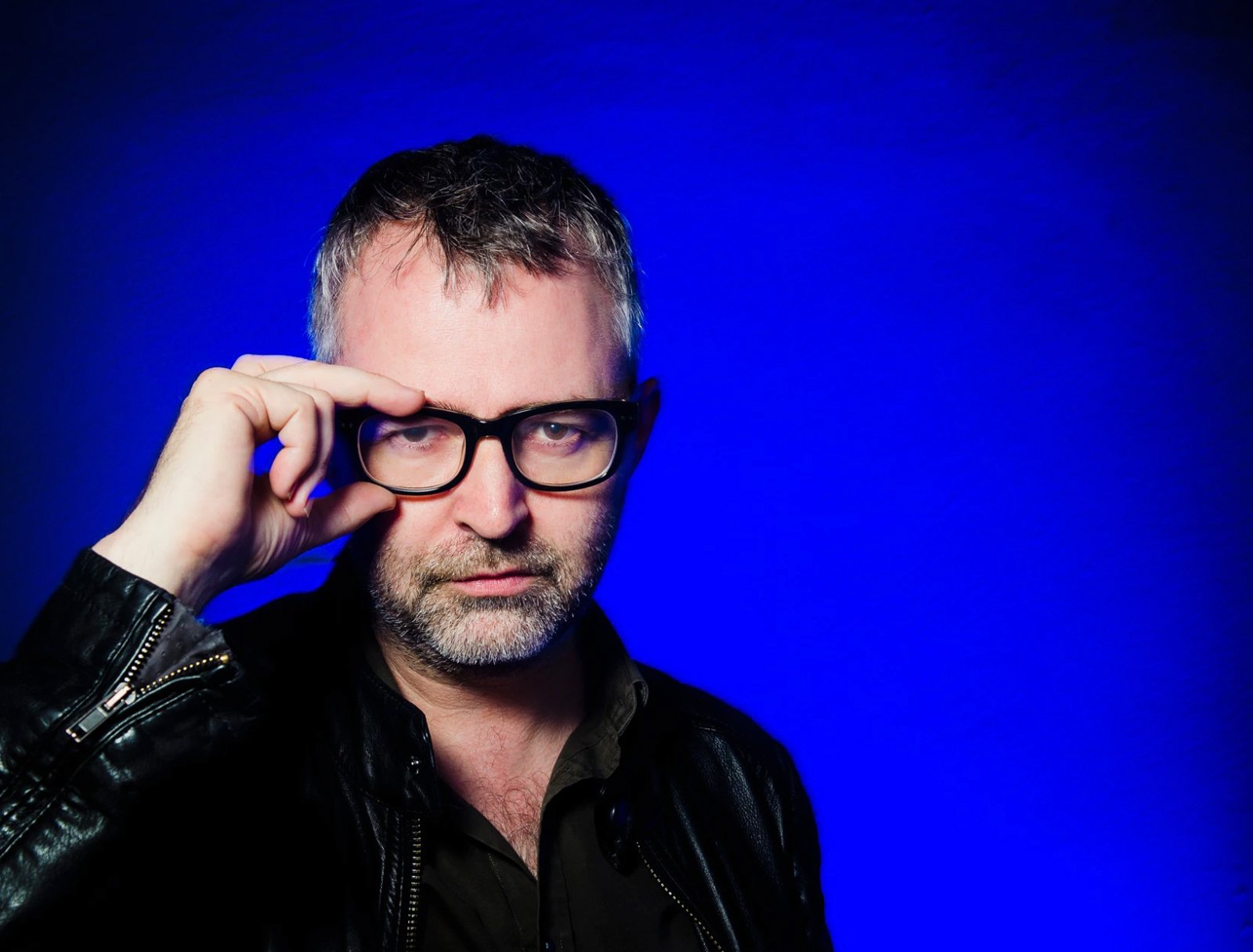 “It was unusual. It had a different background to the average shot. And my stance made me stand out compared to other headshots,” commented Mike.

You’re out to present your best self when you’re selling to the media. And your media attention is your first port of call.

Talk to your photographer before the shoot. Make sure they understand your product, your company, your fund. You’re there to create an image together. If you think you can just bring in a hired gun and get some outstanding imagery, ain’t gonna happen.

I hope these tips and examples have helped. Or at least given you pause to think about what exactly your imagery says about you and your offering. Because there’s a snapshot, and then there’s an image. Which one are you?

Why your headshots and PR photos suck, and how to fix it
Comments
Follow the developments in the technology world. What would you like us to deliver to you?
All

NEXT
Tech.eu Podcast: Scaling up rapidly in Europe — with Hanno Renner, Personio
The Tech.eu Podcast is a show in which we discuss some of the most interesting stories from the…
Andrii Degeler