Publicly yours: The year 2021 in European tech IPOs, SPACs, and direct listings

This was a fruitful year for tech IPOs in Europe. Over the past 12 months, we've counted 28 companies that went public through an IPO or a SPAC deal, which raised at least €100 million each. In addition to that, there was one significant direct listing. Read on to get a bird's eye view of the landscape of Europe's newest public technology companies, as well as their performance on the markets.

Before we dive into the wonderful world of stocks, let's take a look at the floatings that actually didn't happen. Back in January, we listed 24 European companies that we expected to have floated by now. Here they are once again in the table below — now with a note on whether the predicted IPO actually happened.

All in all, only six out of 24 companies didn't actually float. Some of them are still planning to go public next year, some seem to have decided to stay private, and for some there's no information available on their future plans. On the other hand, there were a few listings we didn't see coming, Turkey's Hepsiburada being the largest.

Below, we've listed the most significant European tech IPOs of the year 2021, followed by direct listings and SPAC deals. We've also taken a closer look at the performance of the fresh stocks — which, as it turns out, is not that impressive.

Danish-founded consumer review platform Trustpilot went public in May at the London Stock Exchange, raising almost half a billion pounds. The stock rose 16 percent in the first day of trading before settling at 265 pence, in line with the listing price. The IPO valued Trustpilot at £1.08 billion.

Online greeting card retailer Moonpig held a successful London IPO in February, which valued the company at about £1.2 billion. The company had quite a bit going for it, with the sales more than doubling from May to October 2020. In the same period this year, however, Moonpig's core earnings dropped 15.1 percent year-on-year.

Dutch-founded code sharing and DevOps platform GitLab popped 35 percent in its Nasdaq IPO in October. The listing valued te company, which became wholly remote before most companies had to, at about $11 billion. GitLab is the only major independent player on its market; its main rivals — GitHub and Bitbucket — are owned by Microsoft and Atlassian, respectively.

Turkish e-commerce company Hepsiburada went public on Nasdaq in July, in a listing that valued it at over $3 billion. The company sells a very wide range of goods on its platform, from groceries and daily essentials to airline tickets. According to the filing, as of 2020 Hepsiburada (which means "everything is here" in Turkish) had 9 million customers.

German online fashion platform About You got valued at €3.92 billion in its June IPO in Frankfurt. At the time of the offering, the company was active in 23 European markets, and stated that it'd use most of the money it had raised to "scale its international commerce operations and grow its tech infrastructure." It also intended to consider potential M&A opportunities and repay shareholder loans.

Romanian-founded robotic process automation (RPA) wunderkind UiPath floated on the Nasdaq stock exchange in April, with a 23 percent pop at the opening. The listing valued UiPath at $35.8 billion, making it one of the most valuable European tech companies. Founded in 2005, UiPath employs almost 3,000 people and is headquartered in the US.

One of the most expected tech IPOs of the year, Deliveroo's public listing in London ended up "an unmitigated disaster". The shares in UK-based on-demand delivery company tanked 26 percent in the debut, wiping some £2 billion from its opening £7.6 billion market cap. Nevertheless, Deliveroo did raise £1 billion in the offering; its shares rebound to the IPO pricing levels in the summer, before tanking once again towards the end of 2021.

German used car marketplace giant Auto1 went public in Frankfurt in February with a 45 percent increase in share price at the opening. After the first day of trading, the shares settled at €53, making Auto1 an official decacorn with a market cap of €11 billion. The SoftBank-backed company that's yet to become profitable stated that had sold "over 615,000 cars and generated 3.5 billion euros in revenue across 30 countries in 2019".

Spanish wealthtech and fund distribution firm Allfunds held Europe's second largest tech IPO of this year in April. The floataion took place in Amsterdam, where the company's shares jumped more than 10 percent after the opening. Allfunds got valued at over €7.5 billion after the IPO, which was seen as a positive sign after the disastrous performance shown by Deliveroo.

In another Amsterdam IPO that took place in January, Polish-founded parcel-locker company InPost saw its shares soar 26 percent and its market capitalisation reach €8 billion. InPost didn't raise any money at all in the offering. As of the end of 2020, the company owned over 12,000 automated parcel lockers and had handled 249 million deliveries through them. Outside of its native Poland, it's now active in the UK, France, Austria, and Italy.

In addition to traditional IPOs, we've seen a few SPAC mergers and a direct listing that are worth mentioning in this list.

The direct listing of the year award definitely goes to Estonian-British fintech unicorn Wise (formerly TransferWise), which went public in London in July without raising money for itself. The debut gave Wise a market value of over £8 billion, and the stock popped some 10 percent at the opening.

UK-founded electric bus startup Arrival floated on the Nasdaq via a SPAC merger in March. The deal, in which Arrival raised $660 million, valued the company at $5.4 billion; on the IPO day, however, its market capitalisation reached $13 billion. Unlike traditional automotive manufacturers, Arrival plans to produce its small electric busses in so-called "microfactories". It currently employs more than 1,600 employees across its offices in London and Bicester.

The UK's online used car dealer Cazoo announced its $7 billion SPAC merger deal in March and actually started trading on the NYSE in August. The three-year-old firm raised "over $1 billion" through the listing "to further build out its brand and infrastructure as it continues to transform the car buying and selling experience across the UK and mainland Europe."

Bonus: How did they do?

Another interesting question to answer at the end of the year is how the European tech companies that floated in 2021 actually performed. Public markets can be unforgiving, which you can see in the chart below where the stock prices of 29 of the newly public companies compared to the prices on the first day of trading.

For more context, we've also added a few European and American technology sector indices to illustrate the general market conditions (green bars towards the bottom). In this case, performance is calculated by comparing the current price points to those on June 1, 2021. 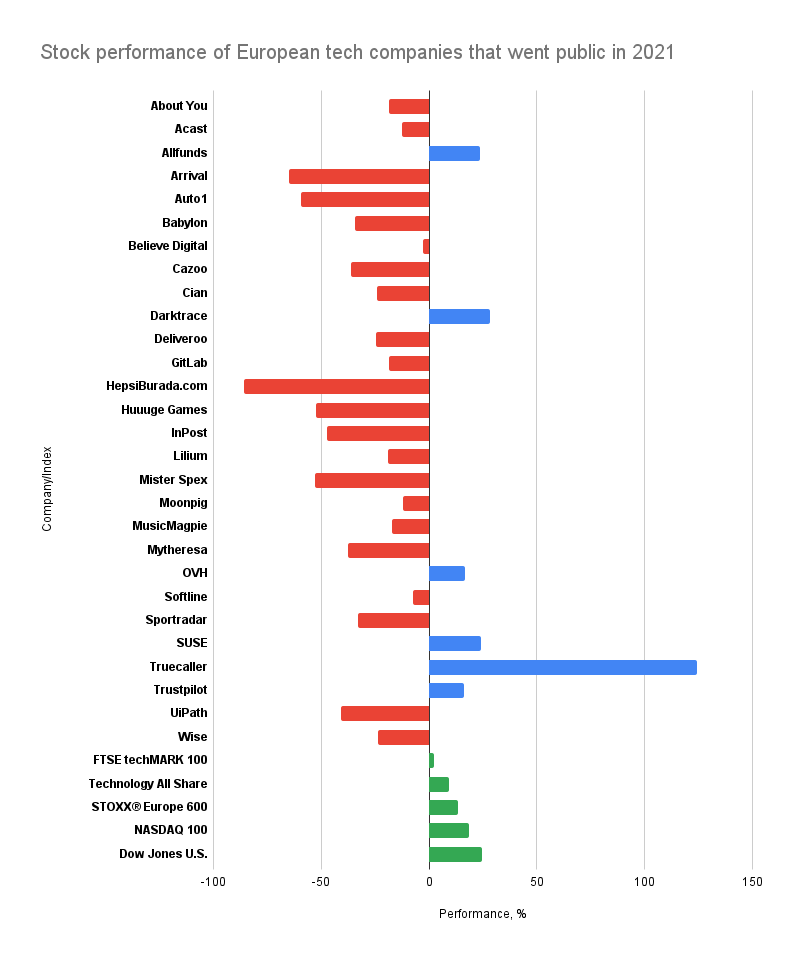 An interesting additional data point here is that a very similar picture can be seen if you look at all US tech IPOs. According to CNBC, 54 out of 55 technology companies that went public stateside in 2021 are more than 20 percent down compared to their peak price. (This is not exactly the same metric as we used in this piece — but the point is very much the same.) 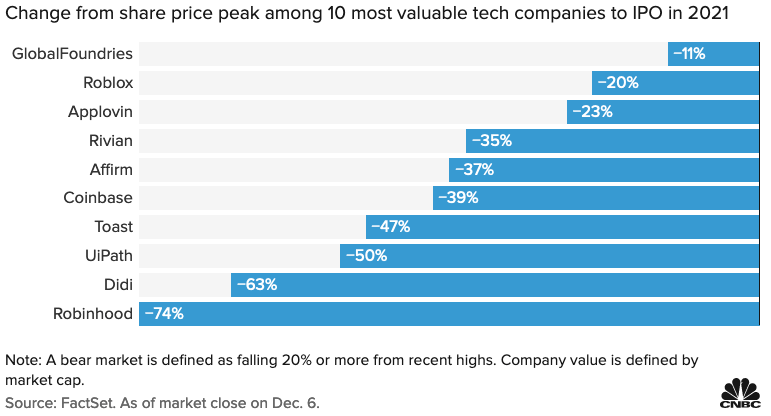 This dynamic allows us to talk about a generally bearish attitude on the markets towards freshly minted public tech companies, which doesn't always have to do with individual performance of each player. Depending on what the coming year brings in terms of regulation, COVID-19 situation, and general investment climate, things can still change to the better for this year's stock exchange entrants.

Publicly yours: The year 2021 in European tech IPOs, SPACs, and direct listings
Comments
Follow the developments in the technology world. What would you like us to deliver to you?
All

NEXT
🎧 The Night Before Funding — Holiday Special
The Tech.eu Podcast is a show in which we discuss some of the most interesting stories from the…
Darya Aksyonova